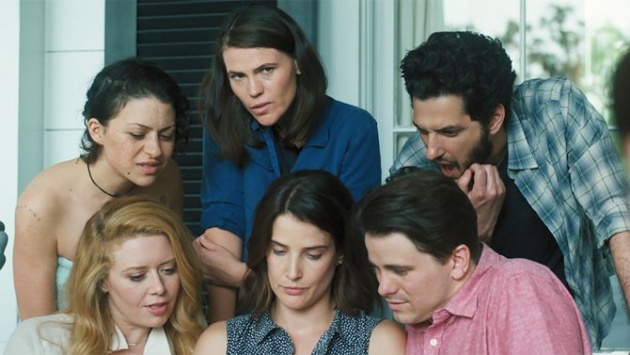 The Intervention is an actors movie, in as much as star names get to play against type, there are some highly emotional scenes and zero special effects. It also has the most predictable, least surprising narrative arc of any independent film that I have seen. No surprise therefore that it has been picked up for distribution by Paramount in a deal worth $2.5 million.

It is written and directed by Clea DuVall, who has starred in such films as But I’m a Cheerleader, Wildflowers, How to Make A Monster, Armed Response and (one you may have heard of) Argo. You can see from her mostly B movie list of credits why she thought she could do better – and actually, I think she does.

The film has a female-heavy cast headed by Melanie Lynsky, Cobie Smulders (on crutches), Natasha Lyonne, Alia Shawkat and DuVall herself augmented by Jason Ritter, Ben Schwartz and Vincent Piazza. The women are more recognisable than the men and pull heavy duty in the comic-dramatic scenes. The set up is that Annie (Lynsky) and her husband to be, Matt (Ritter) travel to Savannah to a holiday home to stage an intervention in the failing marriage of Ruby (Smulders) and Peter (Vincent Piazza). Normally, such interventions tell couples to get their act together; this one is about breaking them apart. Annie is assisted by best pal Jessie (DuVall) who has brought along her lover, Sarah (Lyonne). The octet is cubed out by Jack (Schwartz) and twenty-three year old string-along Lola (Shawkat).

‘I’ve kissed girls before,’ says Lola the flirt to Jessie the interested. And she’ll do it again, exposing the cracks in the relationship between Jessie and Sarah. Annie drinks too much and won’t commit to a ‘save the date’ invitation card – she has postponed her wedding four times. Jack is still getting over the death of his wife; they were going to break up but cancer brought them together. Annie and Matt’s marital problems seem par for the course.

Set over three days and two nights, DuVall has clearly read a screenwriter’s manual. I wished she’d throw it away and go with her instincts. Act One (day): characters assemble. Act Two (night): Annie gets drunk and suggests a game of charades. Nudge, nudge, they’ve all being playing charades. Act Three (day): please purchase some corn on the cob. Act Four (night): explosions and woodland hunts. Act Five (day): lovely breakfast, let’s go out on a boat – or not.

No-one talks about jobs or other characters outside of the movie: they are all focused on the task in hand. But why is an intervention even necessary? Surely, it is better dealt with on a lunch date.

If the set up is contrived, so are the problems. I didn’t really believe that Jack had been on the road since his wife died and could not bear to return to Los Angeles. If you want a really good tight drama set predominantly in a single location, please do see Your Sister’s Sister.

Cutting DuVall some slack, she was inspired to direct partly through working with actor turned director Ben Affleck (Ben and brother Casey are thanked in the credits). I just wish she knew some writers to give her notes like: how to create surprise in dramatic story-lines (signpost one reversal, but give viewers a different one). How to make drama moving: base it on personal experience (your own or of those close to you). Take notes for scripts you might one day write and ride public transport or wait in a crowded post office, bank or supermarket frequented by couples. Better yet wait in a bank with couples queuing to secure a loan.

DuVall’s work as director is rather better and I felt for the crutch-ety Ruby during a football game (Smulders truly takes one for the team). The Intervention could have done with an intervention of its own (by a script doctor) but it is nicely played. Polly Morgan lensed. Sara Quin provided the music.