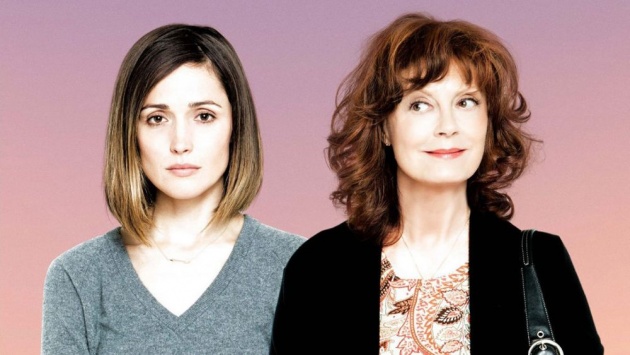 The Meddler couldn’t be more different from writer-director Lorene Scafaria’s 2012 feature debut, Seeking a Friend for the End of the World, a road movie set in the near future starring Steve Carell and Keira Knightley. Actually, it could be more different. It could be a biker Viking movie with subtitles starring some ex-players from the Canadian national hockey team.

The Meddler is actually inspired by Scafaria’s mother, who after the death of her father started to take more of active interest in her life, her choices and so on. But if you think The Meddler is a two-hander of an obvious kind, shame on you. Scafaria has crafted a proper star vehicle for Susan Sarandon who inhabits and helps create a properly memorable title character.

So how do you get from the End of the World to a drama about coping with loss in Los Angeles? I live in the UK where we have just voted to leave the European Union so I only know about the End of the World. In my experience, life tells you what to write. My guess is that the eight unproduced screenplays she wrote before Nick and Nora’s Infinite Playlist was finally made – the film starring Michael Cera and Kat Denning was released in 2008 – was a rehearsal for the perfectly honed film that would be her second picture. Jane Campion didn’t just make The Piano – it came from somewhere.

Scafaria has her own method for writing a script which might be useful to budding authors. She writes the first thirty pages without knowing what the plot is. Then takes a break, enjoys life, then returns to the screenplay and figures it out. As we know from Aristotle, character is action, as opposed to Action Man which is a toy by Mattel and not by Character. So a character’s destiny is defined by what they do. They take their daughter’s plus one at a baby shower even though their daughter doesn’t turn up. (‘You can’t be a plus one on your own, mom. You have to have a one to plus,’ is typical of Scafaria’s sharp dialogue.) They take an interest in the man at the Apple Genius Bar, who is not a genius (‘it’s just a name’) and starts buying i-branded products for her nearest. They can’t face being an official volunteer at the hospital – there are sick people there – but hover. They might give a stuffed toy to a catatonic bed-ridden stranger who traces circles with her index finger. Most old people have circles under their eyes - they don’t trace them in the air. They might even volunteer to pay for a lesbian’s proper wedding. (It’s legal in Los Angeles, get a grip.) And tear that label off that wedding dress.

What’s Rose Byrne doing in the movie? As Lori, she doesn’t answer her mother’s calls. Her mother, Marnie (Sarandon) calls all the time. Lori is getting over a painful break-up with her actor boyfriend and she doesn’t like to be reminded of him, even though his face is all over town (he has a new movie coming out) and a glamorous younger girlfriend. Lori just wants to write. She has pitched a TV pilot. Eventually, she goes to New York leaving behind three grand-dogs.

In case you’re wondering why Lori is not as badly affected by the death of her father as her mother is, it happened almost two years ago. And she is upset – big time. Marnie is not looking for a new husband or even closure. She still has her husband’s ashes – his Italian family want Marnie to pick out a headstone. She is trying as much as possible not to face it.

Marnie has a therapist – Lori’s therapist. Lori can’t get an appointment because Marnie is seeing her. Marnie asks the therapist about her daughter. The therapist just smiles. After a while she asks, ‘and how do you feel?’ Marnie doesn’t know how to respond. Displacing one’s own feelings by taking an interest in others is classic distraction technique. ‘Do you think you feel guilty because he [Marnie’s late husband] left you all this money?’ the therapist asks. Marnie doesn’t know. Maybe the therapist should ask Aristotle – he’s Greek.

As we might know from movies or television, baby showers are excellent places for meeting people. So are cemeteries though the people tend to be dead. So Marnie finds herself attracting an eligible divorced man (Michael McKean) who thinks a holocaust museum is a good destination for a first date. Marnie puts down her food – she’s out of there. As we also know from TV, these guys keep cropping up, though much later in the movie.

If you are a writer with comedy leanings, there should be at least five scenes that are worth staging. In The Meddler these are: Marnie disposing of marijuana when a traffic cop signals to her; Marnie being mistaken for an extra when she acknowledges a down-and-out and has her possessions taken from her to better suit the scene; Marnie frying an egg inside a slice of bread; Marnie being asked ‘you know what they say about counting chickens?’’No, what do they say?’; the safe word used when Marnie starts talking to an actor (Harry Hamlin) on set; a pregnant woman (Lucy Punch) tossing aside a gift. Oh and what Marnie does to her admirer when she makes an advance.

Actually, there are more than five such scenes in The Meddler which is why it is eminently worth one hour and forty minutes of your time. Sarandon affects a New York drawl for her voiceover scenes that disappears when she speaks with people. Through her you feel Marnie’s prevarication.

Dropping in late in the film is J K Simmons’ security guard who saw Marnie on set and invites her over to have a meal with some cops – cue some very bored, awkward gestures. In this movie, Simmons sports a moustache and gives the sort of performance you would associate with Sam Elliott (The Big Lebowski, Grandma). He also sings. There is also a terrific scene – an image really – where Marnie picks up the Genius bar kid she has befriended and drives to and from college with his brother. They stop for ice cream. We see the three of them in the car – two African American young men and Susan Sarandon as their designated driver – eating ice cream. You can’t easily summarise the tone of the film. It’s a character study and by the end everyone cares a little more about Marnie, not in an artificial, she’s got money, let’s take advantage kind of way. You really care about her.

My favourite image in the film, quite apart from Marnie frying an egg in a slice of bread that immediately made me want to go to the kitchen – I’m at a multiplex, who knew – is of Susan Sarandon lying on a big double bed with an i-phone next to her lit up by the image of a sea turtle. Marnie is that turtle.