Whenever anyone mentions the words Salem's Lot, or I come across the cover art of the novel or the film adaptation, certain images come to mind: A 17-year old me sitting alone in the living room, watching what I found to be the scariest movie ever made. The vampire-child scratching against the bedroom window, the Nosferatu-like master vampire who towers over his victims, the pale vampires with the glowing eyes. It was enough to scare the hell out of me. Then the lights went out. I sat there, alone.

To say Salem's Lot - the first TV adaptation of Stephen King's novel - left an indelible mark on my young psyche, is an understatement. It got me to start reading horror fiction, watch the films of Tobe Hooper (who directed this version of Salem's Lot), and fear the dark for a long time coming.

So what makes this version of the novel so terrifying? A closer look reveals that it has a lot going against it: It was made in 1979, for TV; it features a hit and miss cast (James Mason is magnificent, while David Soul is only passable in the lead role); it has a low budget; and it doesn't follow the source material that closely.

But it also has a lot going for it: Tobe Hooper, an occasional film-making genius, and one accustomed to working with low budgets, makes the best of what he's got, and produces an aura of menace that is undeniably effective, despite the film not having a single shot of gore in it. His expressionist style is perfect for the story of a small town being slowly taken over by a Master vampire, utilizing shadows, sound, and a mastery of suspense to create one nightmarish sequence after the other.

The novel was adapted again in 2004, but, despite a higher budget and better effects, that version leaves a lot to be desired, mainly because it fails at being scary.

So, if you're in the mood for something frightening, brilliant, and which has atmosphere to spare, watch Salem's Lot (1979). Then, go read the book. You won't regret it. 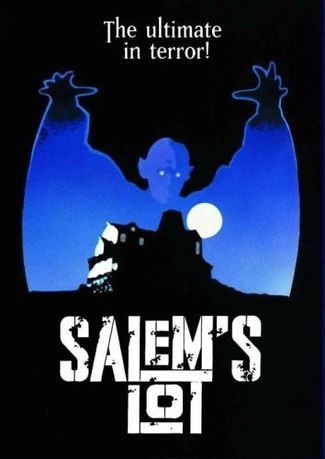