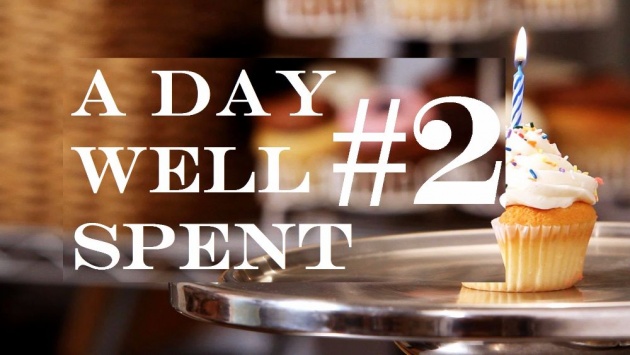 Image Source: How to Make Birthday Cupcake via youtube.com

You might not be able to blow out the only candle on your cake. But as if it were the light of a million candles, your love brightens up our lives in a way that no one can explain. Happy 1st birthday.

Hi Everyone! So this would be the second part of A Day Well Spent Blog wherein basically I tell the story of a specific day and share it with you, it's like a diary or a journal that you can read when you have free time.

So moving on, I decided to write something about my cousin's birthday because of the bountiful buffet they had which amazed me and at the same time I didn't expect such food menu for a 1 year old birthday :D 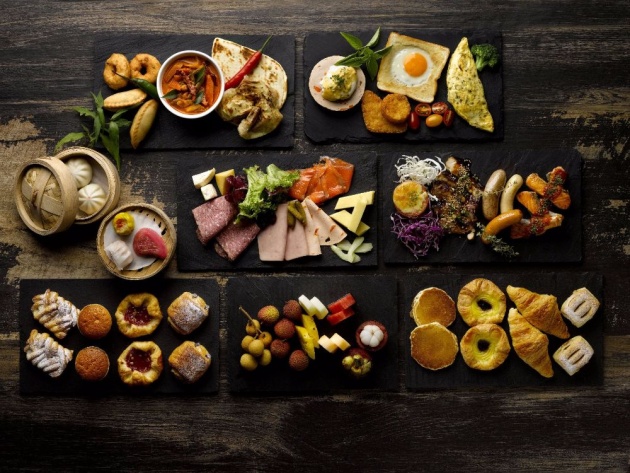 Before anything else, I would like to clarify that the Menus that had been served in the Party are inspired by Asian Cuisine (includes several major regional cuisines: East Asian, Southeast Asian, South Asian, Central Asian, and Middle Eastern. A cuisine is a characteristic style of cooking practices and traditions - via en.wikipedia.org) considering that my uncle is the Head Chef in Chowking Marilao Branch so the cuisines are inspired by his expertise menu.

Yep, The Menus are a little bit out of the usual menu that a Kids Party have but I must say that it is really satisfying and even kids love it. 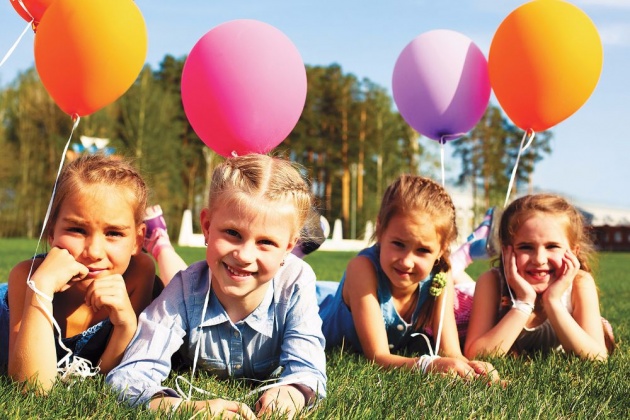 The Party was hosted by clowns which leads children to be scared, they might be thinking about the IT movie wherein the clowns are frightening (Bad Movie! :D) I personally watched the whole show, not so entertaining for me but it was a great time to see those children happy :D

The children who came to the party are the children of Millenials (The children of Baby Boomers or Generation Xers, while some older members may have parents from the Silent Generation - via en.wikipedia.org) so they keep on guessing and revealing the Clowns' Magic that made it a little bit awkward for me and for those clowns. hoho

Clowns are comic performers who employ slapstick or similar types of physical comedy, often in a mime style but due to the creative rebellious mind of story tellers, Clowns are now known for their horror and frightening affection to Children. Movies like Stephen King’s It (1990), Amusement (2008), Killer Klowns from Outer Space (1988), Clownhouse (1989) and many more.. 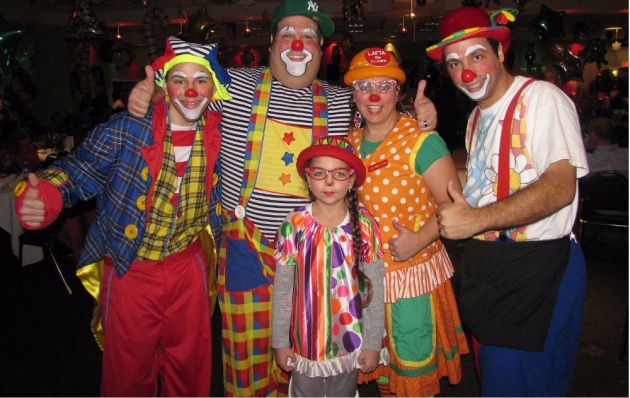 After the Clown Show, The Main event for me and for those parents in the party has finally came. It's Dinner time!! The First on the Menu, Not so usual but serve as an appetizer for all. Fish Cracker with a special kind of sauce and the finger food chicken bits. Well I have a really great time munching those Crackers. Good Choice! 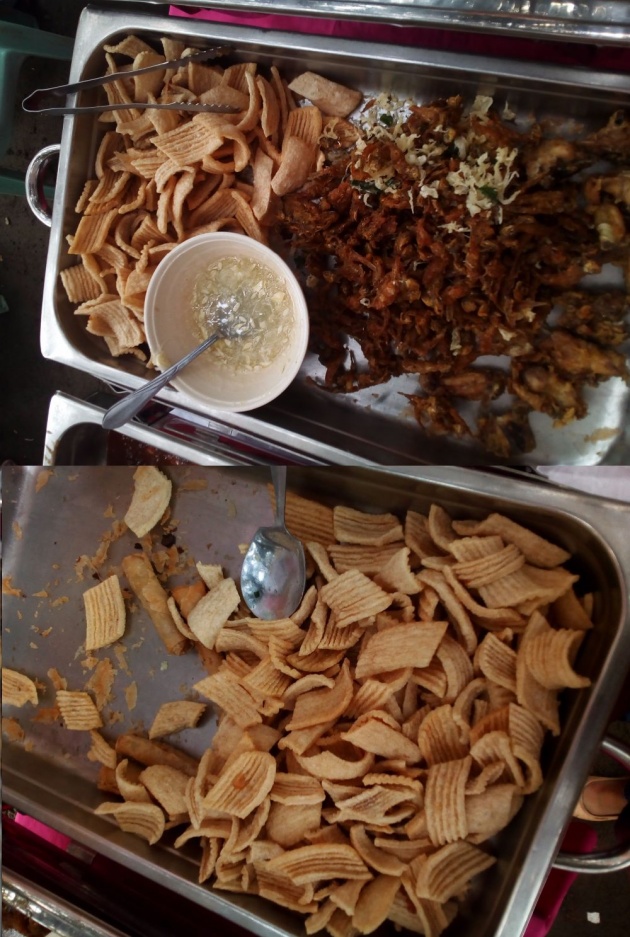 Cooking is all about people. Food is maybe the only universal thing that really has the power to bring everyone together. No matter what culture, everywhere around the world, people get together to eat.

The Next one are Simple but a really good menu for children party. The Creamy Carbonara with the touches of Corn and Ham, The Very known for kids' party - Hotdog and Marshmallow on a stick, The never forgotten - Fried chicken and the famous Spaghetti. I've tasted all those four dishes and I can say it is really a good choice of menu and chef haha! :D 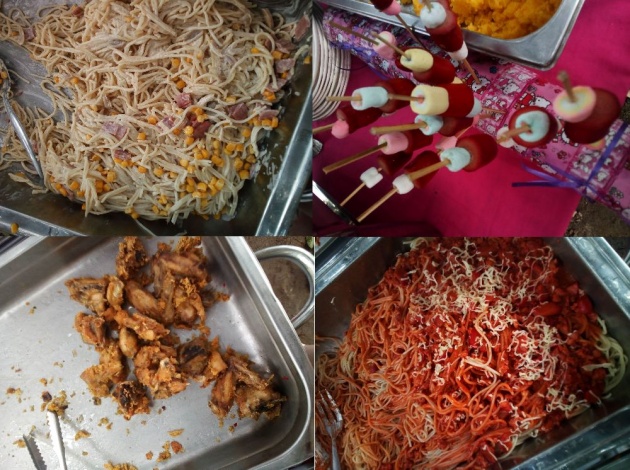 Let's upgrade to something unusual in the Main Dishes. The Pancit Canton Chowking Style is really impressive, it may be look like a little bit bland in the picture but the taste is absolutely stunning :D No Calamansi needed just YOU, The fork and the Pancit Canton itself ^_^ The Buchi on the last picture is above expectation, Those Sesame seeds and special caramelized sauce is what to look for. However It might not be the usual one or the round one style but they really got the taste, I ate almost 3 of it and I still want more :D 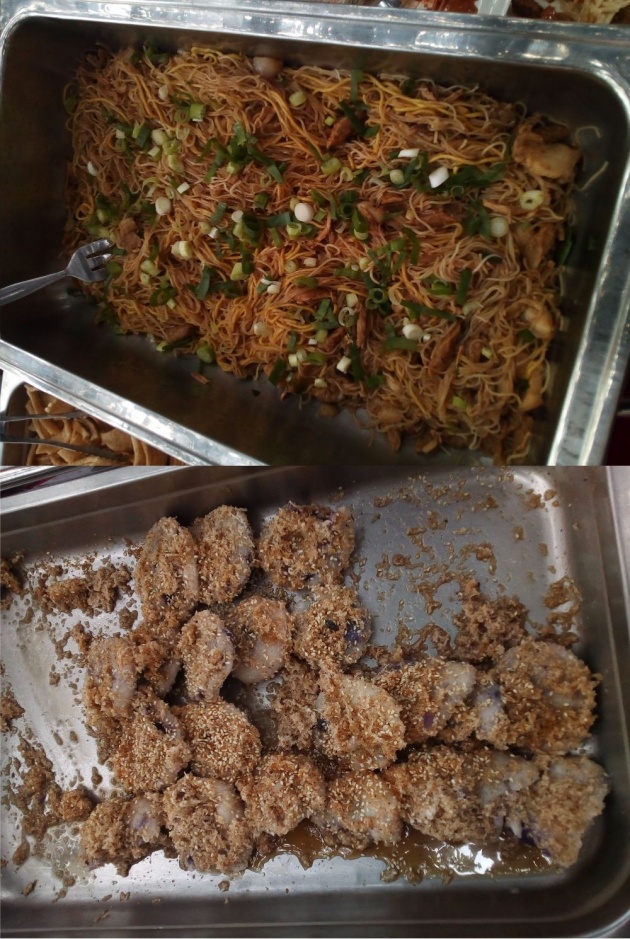 They also have the Rice Meal! These Java Rice which has the Special Recipe of My uncle and the Barbecue and sauce with the touch of sesame seeds. Personally, I didn't tasted it but according to those people who did, It's good and if it would be sell out there, They would really buy some ^_^

See? Some of the Foods are not really appetizing for the kids but a great meal for teens and adults like us :D It's a really good choice of menu, it balances Children's taste buds and adults :D

Food, in the end, in our own tradition, is something holy. It’s not about nutrients and calories. It’s about sharing. It’s about honesty. It’s about identity.”

Before the Day ends, Blowing of candles is a must! (even though a 1 year old can't blow her own Birthday candle hehe) We all gathered for this event and witnessed how my little cousins cried next to the Birthday cake haha! I think she's not fun of gatherings and she doesn't like noise around her. Thanks to Red Ribbon Dedication cake and we have celebrated a simple and joyful Birthday Party ^_^ 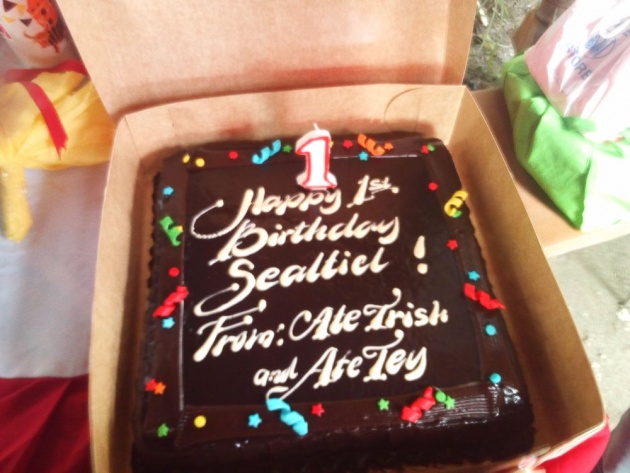 I consider the Day as A DAY WELL SPENT, not just because of those foods but also the presence of my family especially my cousins. Just for you to know, I am the oldest among my cousins that time and I really felt like one of the kids at the moment which really fun and entertaining :D

So What do you think? Share your thoughts and suggestion for the future blogs ^_^ Share your Birthday Party experienced, I would like to here about that ^_^

Image Source: via eskipaper.com/ Edited by Me The more you praise and celebrate your life, the more…