Analysis on changes to buzz scores/revenues for 2 days

I started to log and monitor the buzz scores/ revenues since August 24 to 26 /2014. With this step  i do think it  will give me more factual  basis or analysis on what points, buzz scores and revenues are given to an activity or per day.  I am doing this for myself and other co- members to understand the changes in the buzz scores and revenues on a daily  basis. Though this are only two days we will see if we could see how, where and what are the changes.

Here are the log in  results of buzz scores and revenues for August 24 and 25 , actually stats before August 26/ 14 activities 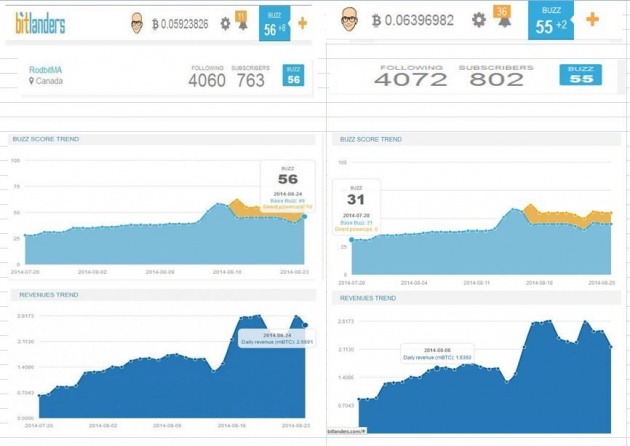 From the images it is shown that there were changes to the buzz scores and revenues from August 24 on the left and August 25 to the right.

1.  Top buzz scores changed from 56+8 to 55+2 and the notification from 11 to 36 , the changed  came from my activity of  answering the notifications. I answered all of the messages of subscriptions and at the same time invite more co- members for being a subscriber on my works.

3. In the total summary of the buzz score , there were also change it decreased  though the total buzz scores is still 56 though on the top head cover its already 55 +2 . The changes on the buzz score had not affected to total which is still 56 though on August 26 it was already 55.  The increase are from influence 634 to 649 which is an up to 15 points  and the sharing was changed to 2 points which make it 175 from 173.

The datas that provided in general was  a decreased on buzz scores and the decreased in revenues . There was a program for buzz score+1  it did not gave an additional to buzz scores ,  if we will examine its a plus 2 for the buzz score , but it probably was in the sharing that was added as the admin say, it is not added to the buzz score but consumed? ( where was it consumed maybe on sharing or on the influenced) . The input to sources that will effect changes to the buzz scores had not done much.  The activities that i had done were inviting co-members to be subsribers, buzzing, commenting subsribers works and without posting new blogs . These activities could not increased buizz score or maybe buzz scores was added to influence or sharing  but  all in all  the activities  lowered down revenues.

So the best thing to do to raise revenue is post new original and good content blogs, micro-blogs , videos and share it to other social media sites, the activity of inviting subscribers as well as new members is a sure way to add new buzz scores and revenues.