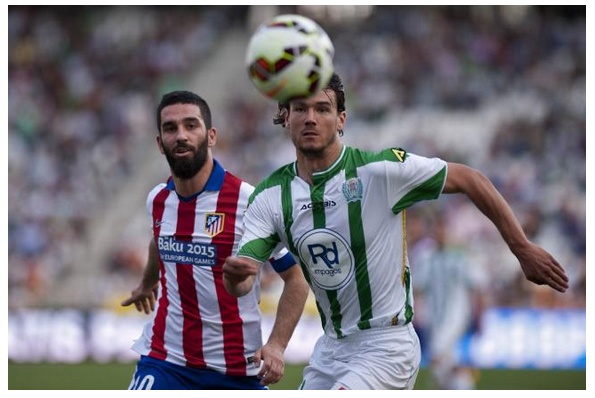 La Liga champions Atletico Madrid moved up to third thanks to a routine win 2-0 away at Cordoba on Saturday evening.

Antoine Griezmann latched onto a poor pass from Bruno Zuculini to drill home the opener after just five minutes before Saul Niguez made it 2-0 six minutes before half-time on his return after a lengthy injury layoff.

Valencia can regain third sport with victory over Villarreal on Sunday, whilst the top two Barcelona and Real Madrid are also in action on Sunday against Celta Vigo and Granada respectively.

Cordoba remain rooted to the foot of the table after a 10th consecutive defeat and there seemed little doubt that Atletico would secure their first away win since January from the moment Griezmann drove at the Cordoba defence and slotted home his 18th goal of the season early on.

Diego Godin could have doubled Atletico’s lead shortly afterwards, but sent his header too close to Cordoba ‘keeper Juan Carlos.

However, it was no surprise when the visitors made it 2-0 from another set-piece as Jesus Gamez’s throw-in was flicked on by Jose Maria Gimenez and Saul nodded the ball into the far corner.

Atletico were able to comfortably sit on their lead after the break with Cordoba only coming close in the closing stages when former Manchester United reject Bebe sent a thunderous strike off the crossbar.

Earlier, Sevilla maintained their pursuit of a top four finish with a comfortable 2-0 win over Athletic Bilbao on Sunday.

Aleix Vidal pounced on an error by Athletic goalkeeper Gorka Iraizoz to open the scoring after just three minutes.

Carlos Bacca then stabbed home his 20th goal of the season midway through the first-half to double Sevilla’s lead.

And Athletic’s miserable afternoon was rounded off as Iker Muniain had to be stretchered off in tears after appearing to suffer a serious knee injury.

Victory extended Sevilla’s unbeaten run at home to 31 games stretching back over 13 months and they could have a vital part to play in the title race with both Barcelona and Real Madrid still to visit the Sanchez Pizjuan this season.t.