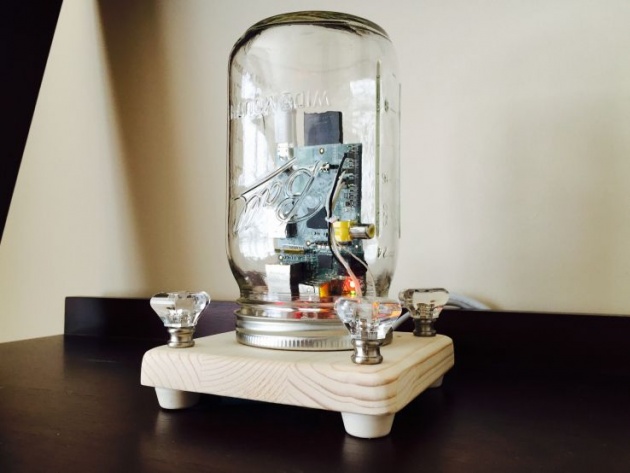 Do you like the concept of backup services like Dropbox or Box but don’t want to relinquish control of your data? Well now you can keep your files safely stored in your own pantry, right next to your jars of fruits and vegetables.

An innovative DIYer has figured out a way to skillfully merge a Raspberry Pi running BitTorrent Sync with a traditional glass Mason jar. The result is a homemade service that keeps files in sync between all of your devices.

In terms of software setup, all you need to do is SSH into a Raspberry Pi and install the Raspberry Pi version of BitTorrent Sync (aptly named Raspberry Preserve), Node.js, and a few other packages. The Pi can also connect to optional LEDs, to blink or stay solid depending on whether data is currently transferring to the device.

While the original creator opted to attach his Mason jar to a wooden base, it is up to you to decide how much effort you want to put into the aesthetics of the device.

BitTorrent Sync was created by the same group that created BitTorrent. An easy way to think of the software is that it is also a peer-to-peer network like BitTorrent, but all of the peers are your devices. The result is that if you place something in a synced folder on your laptop it will be synced to the node hosted on the Pi inside your Mason jar, then shared with your phone, desktop, etc.

Because the whole solution is based on a Pi, the project can basically be upgraded to whatever level desired. For example, you could install an optional hard drive for increased integrated storage in the jar itself, or connect a USB WiFi attachment so the jar doesn’t need to be tethered to an ethernet connection.