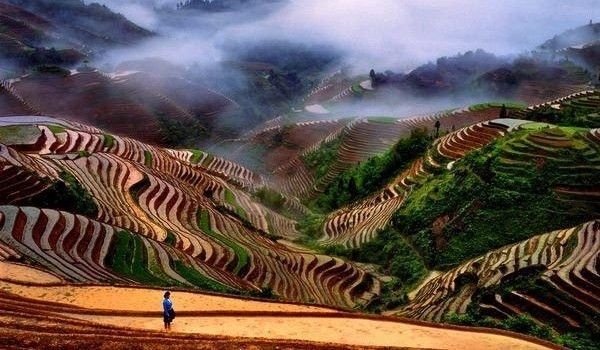 Amazing! This is one of the adjectives often used in describing this ancient Philippine wonder - the Banaue Rice Terraces. Built approximately more than 2,000 years back, this ancient architectural feat has withstood the test of time and still is. This monumental structure has been true to its purpose. Ancient Ifugaos - the natives of the Ifugao province where this magnificent structure is located built this layered rice paddies for rice production. The stepped rice fields are still producing rice for its people until today.

Dedicated workers toiled for years in building this one-of-a-kind structure. Its walls were built of stone and mud, materials abundant in the area. However, without complex building tools, the effort exerted by the builders of Banaue rice terraces is a larger - than-life experience. They spent years of hard labor scraping and piling walls for the rice terraces for decades. Their efforts didn’t go in vain. Today, the man-made terraces still looms on the mountainside where it was built thousands of years ago. It still carries the pride of its builders for centuries.

Towering thousands of feet above sea level, the mighty rice terraces appears indestructible. In the recent past, however, the younger generations of Ifugaos look as if they slowly forget the heritage and significance of this ancient beauty. Many of the young Ifugaos choose to live in the city right now, away from the natural beauty of the mountains that protect and give them food for thousands of years already. Fewer people are left in the province to take care and continue the ancient tradition of sustainable farming. If this trend continues, the future of one of the most beautiful structures on earth is becoming uncertain. Portions of the rice terraces are now suffering from cracks and other natural damages due to neglect. It is not clear how long will the once magnificent structure to hold on before it will meet its eventual demise.

The vulnerability of the Banaue Rice Terraces was made as a basis by putting it under a protective program called World Heritage in Danger. The terraces stayed under the protective care of the program since it was listed there in 2001. It is a saddening feeling that a once glorious and living cultural beauty is now degrading due to the lack of interest of man. Today, the agency that manages this ancient wonder is just counting on tourism for its rehabilitation. The structure that for a long time has sustained the people living around it is now the one needing sustenance from the people.