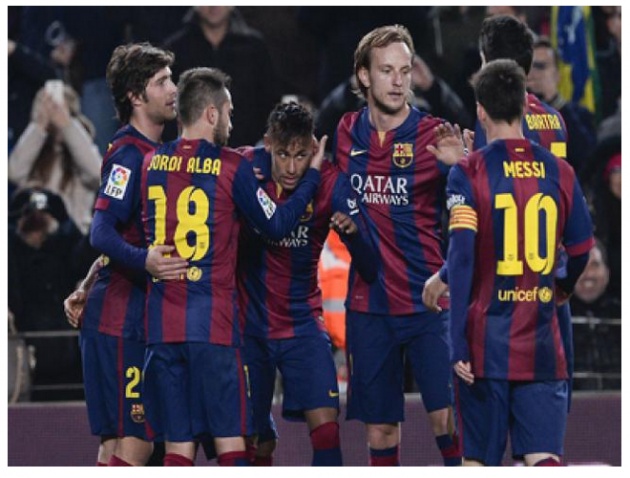 Barcelona eased their crisis ridden week with a comprehensive 5-0 thrashing of Elche to all but seal their place in the quarter-finals of the Copa del Rey.

Despite the speculation surrounding his future in recent days, Lionel Messi captained the side on his return to the starting line-up and scored from the penalty spot after goals from Neymar and Luis Suarez had already put the hosts in command.

Jordi Alba added a fourth after the break before Neymar rounded off the scoring in style with a powerful drive from 20 yards out.

Barring a meltdown in the return leg on January 15, Barca will face the winners of the tie between Atletico Madrid and Real Madrid in the last eight.

"I don't speak about what happens in the dressing room," Neymar said when asked about a reported breakdown in communication between Messi and Enrique.

"I am happy with how the game went for me and the team. We took a big step forward. I am happy for Messi and Suarez too. Now we need to do the same against Atletico (on Sunday)."

Messi and Neymar were among eight changes made by under fire coach Luis Enrique from the side that lost 1-0 at Real Sociedad on Sunday.

The two South American stars looked keen to make a point to their boss from the off and Neymar was unlucky to see a penalty appeal turned away 10 minutes in when he was bumped to the ground by Damien Suarez.

Dani Alves was then inches away from a spectacular opener as he returned a punch from Elche 'keeper Przemyslaw Tyton back towards goal from 30 yards out, but the ball flew just wide.

Neymar also came close when he lifted a wonderful pass by Messi over the onrushing Tyton only to see the ball fly also just beyond the far post.

However, Barca finally made the breakthrough 11 minutes before half-time when an enticing low cross by Suarez was smashed home at the far post by Neymar.

The Uruguayan found the net himself moments later with a brilliant individual effort as he rolled his marker before cutting inside and fooling Tyton with a near post finish.

Messi's name was chanted regularly by the sparse Camp Nou crowd in a sign of support after a difficult few days for all those at the club, and he added his name to the scoresheet from the spot after Neymar had been upended by Enzo Roco.

The one way traffic continued after the break as another sumptuous pass from Messi freed Alba inside the area to fire low past Tyton to make it 4-0.

Yet, the best was still to come from Enrique's men when Neymar cut inside onto his favoured right foot and thumped home his second of the night off the underside of the bar from 20 yards.

The Brazilian was denied the chance to grab his second hat-trick of the season, though, as he was replaced by Pedro Rodriguez with 23 minutes remaining after suffering another heavy challenge from Suarez.

Earlier, Sevilla took a big step towards securing their place in the last eight with a 2-1 win at Andalusian rivals Granada.

Goals from Barca loanee Gerard Deulofeu and Kevin Gameiro either side of half-time put the visitors on course to victory, but Lass Bangoura's injury time strike on his Granada debut gives Joaquin Caparros's men a ray of hope heading into next week's return leg at the Sanchez Pizjuan.