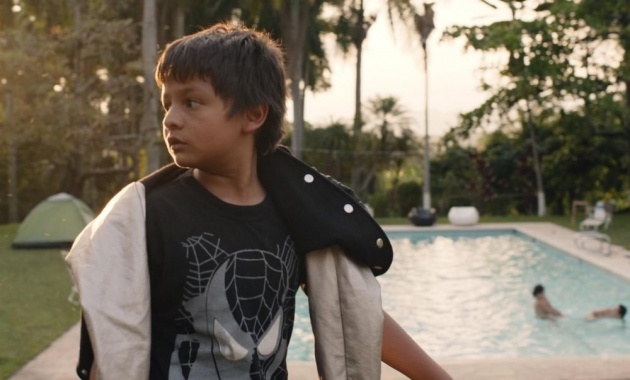 Few Colombian films get distribution in the United Kingdom but I hope GENTE DE BIEN, showcased at the ‘Semaine de la Critique’ at the 2014 Cannes Film Festival, is one of them. The debut feature of director Franco Lolli, it tells the story of ten year old Eric (Brayan Santamarià) who is taken with his dog by his mother to live with Gabriel (Carlos Fernando Perez) the father he hardly knows. The apartment, suitable only for one person, is tiny, and Eric, first seen kicking a tin-can substitute football with other kids in the street, changing the rules, doesn’t always play nice. Gabriel repairs furniture for a wealthy middle class woman, Marie-Isabel (Alejandra Borrero) – well, I say repair, we constantly see him sanding the same piece of wood, but I’m willing to forgive this one piece of visual shorthand. Marie-Isabel has two children, a screaming teenage daughter who isn’t given what she wants, and a son just slightly older than Eric. She insists the two boys spend time together and offers Eric some of his old clothes, though when Eric tries on his baseball-style jacket, the kid protests, ‘I still wear that.’ Shooting hoops in the boy’s room, Eric cheats to boost his score, standing by the hoop, putting the ball through the basket, over and over. The boys fight as a result. Marie-Isabel gets them to make a reluctant peace; the boys touch rather than shake hands, Marie-Isabel makes them try again.

The family introduces Eric to a world previously out of his reach – toy shops (Nerf guns) and the mall and (much later on) swimming pools – but he is very much the poor relation. They don’t ask him much about his background. Meanwhile, Gabriel tries to get a loan for a deposit on a new apartment. Eric and Gabriel visit Gabriel’s sister, who complains that the man only visits when he needs help. There is a mini-crisis when in a bar, Eric gets into trouble for fetching bottles of beer for Gabriel and a group of men (‘he shouldn’t be handling alcohol’) then Eric’s dog is picked up by the stray canine patrol and taken into a pound. The dog is retrieved, but isn’t the same afterwards. Meanwhile, Eric steals money from Marie-Isabel for the deposit; he is caught and returns it but now cannot be trusted.

Nevertheless, Marie-Isabel invites Eric and Gabriel to stay with her and a group of guests at a summer house. Eric can play with the children but Gabriel is there to work, so it doesn’t seem like charity. Gabriel feels the difference between himself and the guests like a rash, a skin complaint that requires attention.

GENTE DE BIEN is about responsibility, class differences and expectation. It is also about the conditions in which boys accept their fathers. It is not above love or biology, but whether they can actually provide stuff. The tragedy of GENTE DE BIEN is that as Gabriel struggles with his own limitations, he has a hard time winning Eric over, no more so than when the dog develops cancer. They can pay a huge amount of money to prolong its life, but it will still die, or (it is inferred) a single sum to terminate its life. Given their limited funds, Gabriel and Eric don’t have a choice, but it is Eric who makes the decision. By the end of the film, Eric experiences class difference as Gabriel does; this is not enough to unite them, as the lingering final image attests.

There is only a hint of the violent Bogota that we know from news reports and the clichés of Hollywood movies (Colombian drug lords) but we do see an emerging economy with a capacity to forgive faults of the past. You are never sure why Marie-Isabel wants to help Gabriel so much. Was there a family connection? Does she feel sorry for him? (The children certainly resist when she effectively takes Eric in.) Does she love him? You want this to be explained; that it isn’t gives Lolli the licence to develop the plot in the way he does.

Eric’s feelings towards Gabriel are also not fully articulated, but you sense he doesn’t want to join him on a path where everything is a struggle - you invest this meaning in the final shot. GENTE DE BIEN is a gripping humanist film that does not propose answers for the problems it shows but depicts individuals hungry for social solutions.

Hello to everyone, greetings from Colombia…

Flowers at my town

Hello everyone, Today i want to share with you, some flowers that can be grown in the region where I…

Taking pictures in the village

I always have the opportunity to go walking around the town, and I take all the pictures I can with …