This guide of CannonSatoshi Bitcoin faucet game provides a walkthrough of its several sections and also analyze how much can be earned playing this strategy game, with tips, hints to progress quicker in the game.

CannonSatoshi Bitcoin faucet game is the latest release from Game Vault Studios, which has developed to FarmSatoshi, their succesful Bitcoin faucet game.
Besides a faucet game, CannonSatoshi is also an invest based game since it is possible to buy some gems which allow to speed up the construction of the satoshi producers (the cannons) in the game.
The concept of the game is much simpler than FarmSatoshi: Buy cannons to bomb the village, loot the mine and earn free satoshis. Those cannons require oil to function, therefore the warehouse of oil must be filled periodically.
Note: the game allows to withdraw satoshi using 2 options: via Xapo and via FaucetBox. In case of using Xapo, it is strongly recommended to register at CannonSatoshi using the same email address as used toregister at Xapo.

The player starts the game with 35,000 satoshi available (as shown in the satoshi balance atop of the page) to be invested purchasing and upgrading the cannons.
To the right of the satoshi balance there is a meter of the oil amount in oil warehouse, and if clicking the plus icon we browse to the oil purchase page (cost of oil is 1 satoshi per unit), where we can also upgrade the size of the fuel warehouse.
Besides, to the right of the oil meter, there is a counter of the gems the player has, and after registration the game provides 50 gems to be used to speed up the cannons construction and upgrading (since they require some time, so they get built/upgraded). 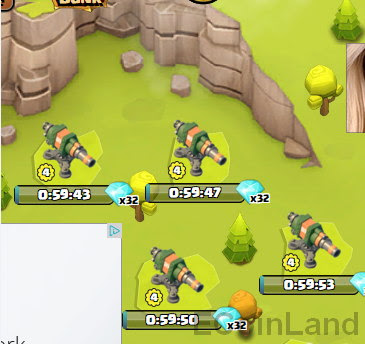 Finally to the top right part of the page (under the nickname used when registering to the game) there is a counter of the points earned while playing the game. performing certain actions in the game will require to have a minimum amount of points scored, as we will see below in this article.
The main page of CannonSatoshi game shows a village surrounded by 24 slots where player can place the cannons. These cannons can be destroyed, if needed.
Before describing how to manage the cannons of CannonSatoshi, let's list the sections in the menu at the top left part of the page:

Now let's describe in a nutshell how to build and upgrade the cannons, but before that, just point that the village (the server) is started with a mine worth 2500 Bitcoin.

- All players are looting the same mine to earn free satoshi. Players race to buy cannons and level them up. Each cannon is constantly shelling the mine and looting the free satoshi, as long as the fuel warehouse keeps some oil. There are 6 types of cannons and each cannon has 8 levels. Cannons need fuel to function at full capacity and earn a maximum number of satoshi.

- To buy and place a new cannon, just click over a free slot in the village display at home page. There are 6 types of cannons : CANNON, BOOM CANNON, FLAMETHROWER, MACHINE GUN, MORTAR and ROCKET LAUNCHER. 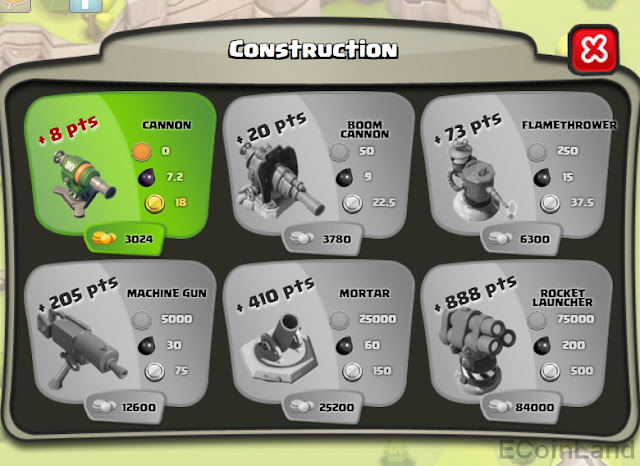 There is a minimum score points requirement before you can buy each cannon. Cannons need a construction time to become operational. You can use gems to speed up the construction time (while there is a counter which shows how much time is left before the cannon is ready).

- Level up your cannons: click over a cannon.
Each cannon can be improved from level 1 to level 8. Enhanced fire power and higher earnings come with higher levels, though there is also higher fuel requirement.
There is a minimum score points requirement to level each cannon.
Cannons need a construction time for the enhancement to take place. You can use gems to speed up the upgrade time.
If you prefer to free the space for a superior cannon, you can destroy the current one instantly. 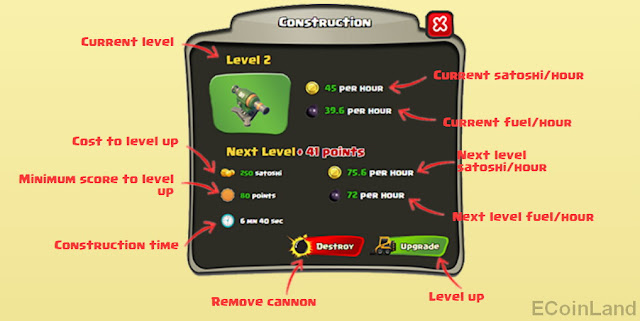 How much is earned: strategies for game progression in CannonSatoshi

Let's describe in more detail, and analyze how to progress in CannonSatoshi in the most efficient ways.

- To earn the free satoshi, just build cannons, and upgrade them to earn more. Additionally we may get some extra free satoshi once completing achievements, and also by visiting the bank page every 8 hours to get the bonus. This bonus (60-6000 satoshi/day) will be very important, specially at early stages of player's game.

- The points score shown at the top right of page is very important to progress in CannonSatoshi. It determines which cannons can be bought, how much can they be upgraded, and also how big can the fuel warehouse be upgraded. We can earn score points in several ways: the main way is by buying cannons and upgrading them; upgrading fuel warehouse and completing achievements also provide some score points.
Therefore, besides focusing on getting bigger earnings, we must focus too on getting enough score to unlock new features.

-Besides, there is the fuel management. It is very important to log in to game and buy oil, as much as needed so as the fuel warehouse never empties. Depending how many cannons and their level, this task might require frequent (even hourly) access to game. Note: sometimes, there appears an antibot captcha while buying oil, so complete it just to avoid any banning action upon account. 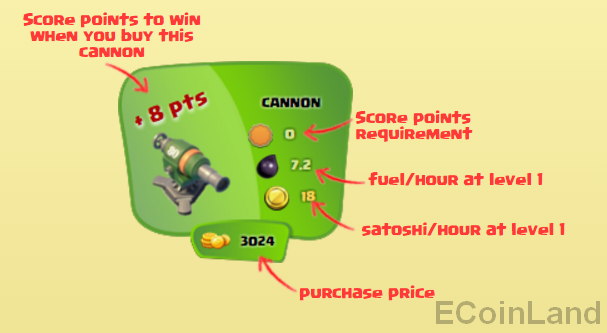 
-The ROI (time to break even the cost) of a level 8 cannon, of any type, is 140 hours. A matter to consider if having in mind to destroy cannons. 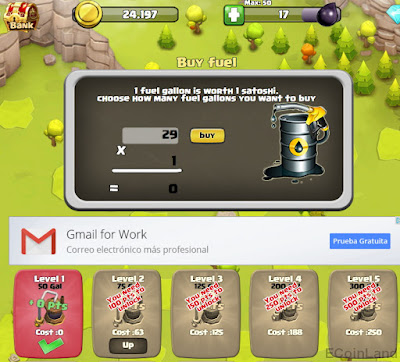 Upgrading fuel warehouse will help adding and upgrading cannons, and also it will set how often we must log in to CannonSatoshi, to refill the warehouse of oil.
The warehouse may be upgraded 35 times, and each level requires that we may have already scored a minimum anmount of points, besides some satoshi cost. Each upgrade will provide some score points to our balance.
A play field full of 24 level 8 Rocket Launchers would ask a level 35 oil warehouse to be refilled every 3 hours and 12 minutes.
To get an idea of how important is to control fuel consumption, keep earning score points and upgrade enough the oil warehouse let's see the next example.
An array of these cannons:
- 4x level 6 Cannons
- 1x level 5 Boom Cannons
- 1x level 1 Flame Thrower
consumes 863 oil units/hour, and has scored (with a small help of achievements, and warehouse upgrades) a total of 6122 score points. Such score points allow to upgrade oil warehouse up to level 8, for a size of 2000 gallons of oil. This size will allow to refill the oil warehouse every 2 hours and 19 minutes.
So when purchasing new cannons, and mostly when upgrading them, watch how much the fuel consumption will increase and how often we wish to log in to CannonSatoshi game

Before having in hand all the information about all levels of cannon types, this new game CannonSatoshi, from FarmSatoshi creators, looks promising. FarmSatoshi is currently one, if not the best Bitcoin faucet game around, which provides much entertainment, earnings, and guarantee of getting paid what we earned so hardly.
as a novelty, there is the choice to invest in the game, yet to find out how it will affect in the progression of game, and also which is the estimated ROI of any Bitcoin amount spent purchaing gems.
Therefore, from ECoinLand is is strongly recommended to give a try to this game, and register at 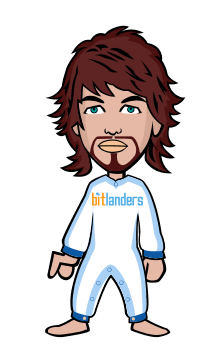