Evolution of the Bicycle

Evolution of Bicycle by "Visual Artwork". Visual Artwork has been working with film, graphics and design since 2008. Taking care of an entire project from idea and planning, to postproduciotn and final delivery, wether it is for film, web or print. 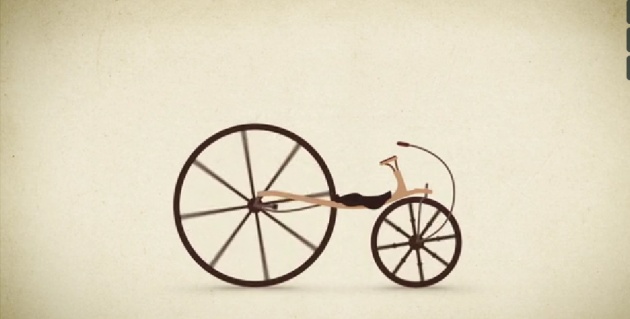 300 years compressed to a 1 min animation telling the interesting history of the bicycle, all the way from the wooden horse to the modern racer.

“A bicycle is a two wheeled, human-powered vehicle, with one wheel behind the other.“ The first track of the bicycle goes back to 1493 where Leonardo da Vinci made a sketch of a very advanced bicycle. This is not proven to be true though. So is there many uncertainties on when and who invented the bicycles improvements along it's history.

00:05 – 00:12
1790, A Frenchman named Comte Mede de Sivrac says to be the first to attach two wheels in each end of a piece of wood. This creation is referred as “Velocifere” or “Celerifere”

1817, The German Karl Drais von Sauerbronn built the first steerable bicycle, the “Draisine”. He’s particular model is not shown in this animation though.

00:30 – 00:32
1839, Scottish, Kirkpatrick MacMillan is believed to be the inventor of the first pedal-driven bicycle, inspired by the locomotive.

00:34 – 00:36
1866, Pierre Lallement’s velocipede “The Boneshaker” is one of the first bicycles with pedals attach to the front wheel. He’s fellow landsman Pierre Michau invented a similar model around the same time and it is unclear who really was the first to put pedals on a wheel, although it is quite curtain it’s from France.

00:38-00:39
1869, The Frenchman Eugene Meyer has the credit for inventing the first high-wheeled bicycle, the famous “Penny-Farthing”. English, James Starley did a lot of further improvements on the high-wheelers and in 1870 he invited the “Ariel”.

All credit goes to Visual Artwork.