I'm not in the best of moods today so I'm gonna go with the slate-ation :)

By now it should be clear that I'm one for a good Brit-Flick, something close to home, something with a bit of cynical sarcasm or something that rattles the 'that's TOO close to home' nervous system...So when I pick up a DVD with an edgy, urban, gritty cover titled 'F'..I'm hooked and I'm reading the synopsis. 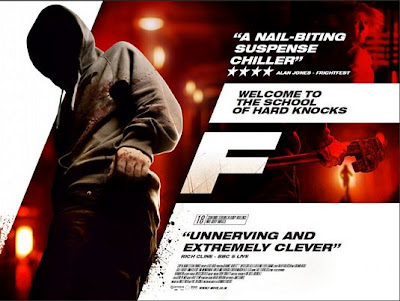 I'm at home, grandmas knitted duvet covering my legs (its cool), lights are out and I press PLAY.

Opening scene, a school boy head-butts his teacher. BRUTAL. "I'm gonna like this".

A British version of an American high school slasher movie.

Formulaic, I think's the word. Even down to the gym babe who wears skimpy shorts, sweats and decides to chill out in the gym... on her own... in the near dark... (as you do).

A school is under attack by a group of hoodied figures (presumably students?) who roam around in the after-school darkness killing off any lingering persons who happen to unfortunately stay after 5pm..ish.

Well, there goes the cleaner. 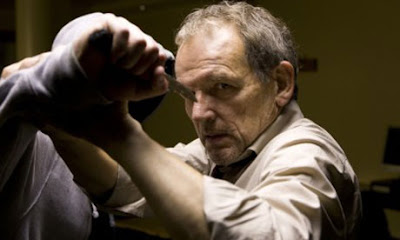 Our unlikely hero is said teacher who, after having some time off,  has returned to school in no fit state whatsoever. As a paranoid weak wreck his teaching abilities have floundered, his classes are pitiful and his own daughter likes to punch his buttons during lessons.

There is obvious relationship issues here which grabs some interest but it's soon to be lost amongst the cries, screams, chases, blood and so on and so forth.

So, its after school hours and father and daughter are having problems. Daughter runs off. Dad needs to find daughter.

Meanwhile, our hoodied, faceless thugs are roaming the school and picking people off. I can't quite work out why the film makers of F thought it was necessary to make our antagonists look like Harry Potter's death-eaters? Not one identity is revealed, it almost feels like an excuse not to delve further into the reasons behind such attack. And to top it all off, these urban death-eaters are even more detached from the real world as they leap from bookcase to ceilings...yes, the entire ambiguous gang are free runners (?!) 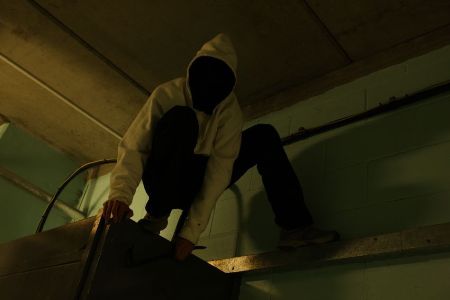 If you're one for gruesome goodies however, there's the odd one or two treat. Some scenes made even me squint...

Having said that, one very annoying factor to this film is it's continuing decision to cut just when something is about to happen. A typical example :- Poor innocent person all alone, hears a noise, hoodied figure comes to light, person gets scared, hoodied figure closes in and CUT. We then return a few minutes later to see a face caved in, jaw ripped.....etc. Not a terribly bad technique but when it's overdone it gets predictable and when it gets predictable, it's gets boring.

So, amongst the CUTS, free running and blood the story continues as dad attempts to track down his daughter with the help of a gutless security guard.

Not much more can be said in terms of storyline until the ending. Another major disappointment. After a scrap with one of the many hoodied villains, dad scores with a badly acted stab into the thugs stomach. Are we about to witness a big reveal?? No..we're not. Oh well.

I will give credit where it's due however, as a tough decision is to be made by dad nearing the end of the film. This is probably the only point in the entire one hour and 26 minutes where I have some emotional attachment but again, it's short lived and rounded off with a cop out open ending. 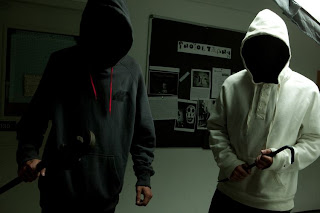 If you like an easy watch, typical structures, a few jumps and some gory goodies then press PLAY but if you're like me and you appreciate a film for it's challenging and thought provoking juice then EJECT immediately.