Festivals in the Philippines 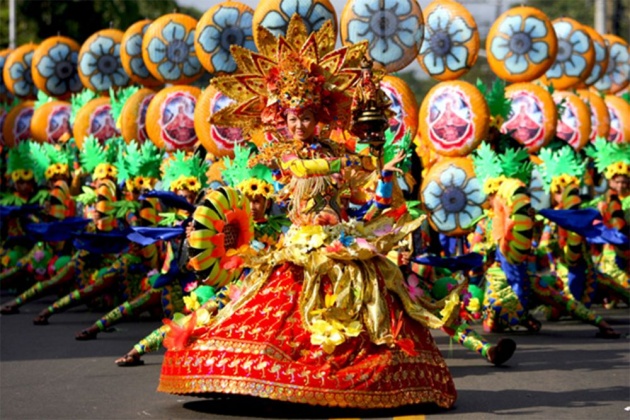 The famous Sinulog festival in Cebu City is held every year on the third Sunday of January. The festival is characterized by a  very long parade with many groups of persons dressed in colourful costumes, finding their way through the streets while dancing the Sinulog. To distinguish the festival from the popular Ati-Atihan Festival on Panay island.

this festival is characterized by a different dance. This Sinulog dance, is now the traditional and ritual dance in honor of Santo Niño. The dance is accompanied by the sound of the drums:  all the time moving two steps forward followed by one step backward. Though the dance is already very old, the parade  is rather young! 1980 was the first year that the parade was organized.

The Sinulog was already danced by the locals in honor of their wooden statues in the period before the Cebuanos were baptized. Later on, after the image of the famous Santo Niño was brought to Cebu and  the Catholic faith was established in the region, the dance was made a part of the yearly fiesta in honor of the Santo Niño.

While dancing, people are shouting  petitions and thanksgivings to the Santo Niño. Shouting is necessary because the pilgrims have to be sure that they will be heard by the Santo Niño.
“Pit Señor! Señor Santo Niño, Manoy Kiloy...."
The Sinulog became indeed a dance ritual in honor of Santo Niño. 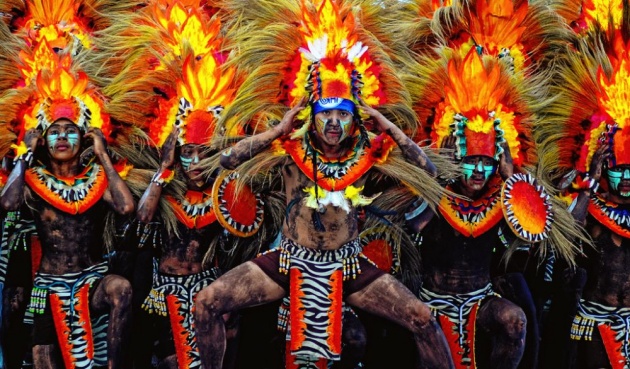 The Dinagyang Festival is celebrated every fourth weekend of January to honor the Christianization of the natives and to respect the Holy Child Jesus. On this day, streets of Iloilo Citywill once again come alive as the Ilonggos celebrate the annual festivity. It is a very colorful parade coupled with a dramatization in honor of the patron Saint Sto.Niño as the object of performs offerings and prayers amidst the cracking of drums and shouts of "VivaSeñor Santo Niño." The thundering of "HalaBira" by the tribe members makes the celebration a livelyone. It is also a very popular tagline used by Ilonggosto express their warm participation during the"Dinagyang" celebration. A tribute in honor of Señor Sto. Niño whom Ilonggos believe was very miraculous in times of famine and drought.

Dinagyang is an annual event, when the whole town rejoices,shouting their pride of being an Ilonggo and telling their culture. It is a wonderful looking back to the past. It is not just a celebration, it is a religious evangelization. Going back to Iloilo is more like a past fulfilled and a lookingforward for future celebrations. It is our culture. The Aetaculture. That's why it is painting the townblack.

The root word is dagyang. In Ilonggo, it means to make happy.Dinagyang is the present progressive word of the Ilonggo word,meaning making merry or merry-making. A religious and cultural activity, it is a celebration of Ilonggos whose bodies are painted with black in effect to imitate the black, small and slender Negritos who are the aborigines of Panay. The warriors are dressed in fashionable and colorful Aeta costumes and dance artistically and rhythmically with complicated formations along with the loud thrashing and sound of drums.

The Masskara Festival through the years gives the people of Negros, as well as local and foreign visitors, a chance to drink and be merry for 20 days. Originally designed to show the hardships of the people of Negros, the Masskara Festival has become a tool of escapism and a way to generate revenues for big business. It has indeed come a long way, and it is clear that the path turn away from the progressive goal.

Bacolod City is known for the popular Masskara Festival which takes place here Oct. 1-20. Local and foreign visitors get a chance to enjoy 20 days of merry making, beer drinking, dining and street dancing. On the weekend nearest to 19 October, the biggest party in Bacalod is scheduled to take place. Bacalod is the capital city of the country's sugar-producing province of Bocalenos.

The term Masskara is created from two words: mass, meaning crowd, and the Spanish word cara, for face; thus the double meaning for "mask" and "many faces". It was coined by Ely Santiago, a painter, cartoonist, and cultural artist, who devoted show in his art works the many faces of Negrenses overwhelmed with various crises.

A smiling mask, which is the symbol of the fiesta was conceived by the organizers to show the happy spirit of the Negrenses despite experiencing bad times in the sugar industry.