Film Review: GET HARD – Ferrell and Hart, the best comedy pairing since Wilder and Pryor 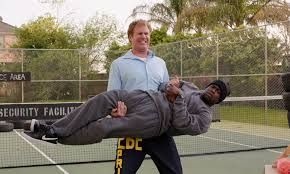 Hedge fund manager James King, the co-protagonist of the comedy Get Hard, is another of comedian Will Ferrell’s likeable idiots. He can make $28 million in a day but have no idea what anybody thinks of him. He has a fiancée (Alison Brie) with a taste for alluring lingerie and the ability to make him think bigger – in the house department, that is. He has a boss (Craig T. Nelson) who wants James to call him Dad. When he is on stage with John Meyer at his engagement party, riffing on an electric guitar like a young Keith Richards (I have no idea whether Keith Richards was actually young, to me he’s like Benjamin Button ageing backwards really slowly) what could go wrong? The answer is an unexpected arrest for a crime – embezzling other people’s money – he didn’t commit.

Get Hard is a classic buddy comedy about a white American and an African American thrown together by circumstance. Darnell (Kevin Hart), the proprietor of Bubbles car wash needs $30,000 to get a loan on a house so he can move his young daughter, Makayla (Ariana Neal) to a better school district. He washes James’ car. At first, he wants James to invest in his company, but James is only interested in bigger returns. But when James is sentenced to ten years and is given thirty days to put his affairs in order, he turns to Darnell for guidance on how to survive prison.

Why Darnell? Because James incorrectly assumes he’s gone to jail. According to libertarian news, ‘35% of adult blacks in Florida have felony conviction’ (their words, not mine). The 35% statistic is used rather differently by ABC News: ‘disenfranchised black males account for 35 percent of all Americans now barred from voting because of felony convictions’. Billmoyers.com quotes the statistic ‘one in three black men have been convicted of felonies’. It is clear that the numbers have been misquoted – typical speechwriter stuff – but it informs James’ misapprehension. At any rate, for $30,000 Darnell is prepared to be Mickey to James’ Rocky - this after a cameo from Jimmy Felon, sorry Fallon.

Darnell has an ex-con in his family, Russell (Tip ‘TI’ Harris) to whom he turns to for advice. The result is a programme of turning James into a deadly sociopath and when that doesn’t work to learn how to take punishment.

I don’t want to spoil the jokes – suffice to say that at one point James ends up in a compromising position with another man (Matt Walsh). There is an encounter with a group of white supremacists, who do white supremacist things like listen to rock music, wear leather and darn their own socks – I mean, grow long beards. There is a ‘prison yard’ scene in which Darnell demonstrates rejection 101, playing three different characters. His use of a black beanie hat is simple but it works!

In short, Hart and Ferrell are the nature heirs of Richard Pryor and Gene Wilder. You might watch the movie and think Stir Crazy, the 1979 comedy in which Wilder’s character ends up in jail and turns to Pryor for help. (Whatever happened to originality?) There’s a bunch of white supremacists in that one too. Don’t you think portrayals of white supremacists should have moved on since the 1970s? Maybe they do in fact darn their socks.

Director Etan Cohen is no Sidney Poitier (who helmed Stir Crazy)  – by which I mean he’s no charismatic actor turned director with a strong social conscience. For goodness sake, he wrote Men in Black III. He is, however, good with improvisational comedians like Ferrell and Hart. At one point, when James trains himself to swear, Ferrell goes a bit too far off character. You can be a little too desperate to get a laugh, as I have known all my life.

The film makes the point that statistics are no guide to a point of view. Stock prices can go down as well as up. A martial art learned badly might just bed in.

I laughed a fair amount during Get Hard – as much as is socially acceptable, anyway. It does what it needs to do without reaching the levels of surreal giddiness of Ferrell’s best work. I wouldn’t call it a bromance or even a ‘fromance (the braided hair poster is misleading). It’s funny, even without the tired sexual innuendo of the title.