Film Review: THE MONUMENTS MEN: I could do without the lecture 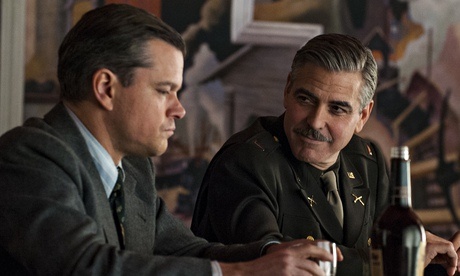 If you ever wanted to compare the tastes of British and American audiences, you need look no further than the British reaction to two recent US hits, LONE SURVIVOR and THE MONUMENTS MEN. In the UK, you can barely find a matinee screening of LONE SURVIVOR two weeks after release, even though fifteen year-olds (that’s thirteen-year olds staring at the floor) can see it unaccompanied by an adult. Meanwhile, the World War Two European lark, THE MONUMENTS MEN co-written and directed by George Clooney, released on Valentine’s Day (well, I’m sure Clooney appeals to women without a valentine) can barely muster an audience much less keep it – six people walked out at the Saturday night screening I attended. It opened to a slew of two star reviews, which are really one star reviews from critics hedging their bets. (‘Is it really that bad?’) I wanted to give THE MONUMENTS MEN the benefit of the doubt, a low risk enterprise since I pay monthly for a Cineworld Unlimited card - they don’t have such things in America and for good reason; it would mess with the grosses. All I had to sacrifice was time, which, given I have not yet seen 12 YEARS A SLAVE and AMERICAN HUSTLE I should perhaps allot a bit more judiciously. (Well, my downstairs neighbour wants me to get my floorboards replaced.)

THE MONUMENTS MEN begins and ends with Clooney lecturing the audience. It isn’t so much a movie as a set of speaking notes. He plays an Arts Professor who assembles a crack team of experts in antiquities – not Indiana Jones and Ian McShane’s Lovejoy, who would feature in my dream team – to travel to Europe to ensure key works of art do not enter into Nazi hands. Given that the movie begins in 1943 and his team don’t reach Europe until 1944, they are hardly in a rush. Clooney’s character says goodbye to his young son but not his wife because, let’s face it, child actors are cheaper.

You’ll notice that I haven’t mentioned his character name; that’s because he isn’t playing a real person – and THE MONUMENTS MEN is based on ‘real events’ – rather a fictionalised version of the man who put together a team. So I’m going to call Clooney ‘Clooney’, and the other characters by the actors playing them except Bill Murray who I will christen ‘Mopey’. Why this uncharitable act? Because Murray refused to appear in GHOSTBUSTERS 3 using the argument, nobody wants to see a fat old man running around, except of course maybe at Christmas – and he has help. No, Mr Murray, I respectfully counter that no one wishes to see you with a frown which you wear throughout the entire movie. (Where’s my character? Where are my lines? Am I getting a free trip to Lake Como for this?) To paraphrase a line from QUICK CHANGE, which he co-directed, Murray is a sucking-on-the-inside clown.

Clooney recruits Matt Damon, Mopey, John Goodman, Bob Balaban, Hugh Bonneville and that cheeky Frenchman from THE ARTIST, Jean Dujardin to hold charred pieces of picture frames that say ‘Pablo Picasso’ and remark, ‘look, Pablo Picasso’. Wow, they went to Harvard for that! As Marlon Brando mumbles in THE FRESHMAN, ‘I ain’t missed nothing!’ Actually, Damon is hired to go to Paris to appeal to the better judgement of Cate Blanchett, who has come up with a neat way of refusing to acknowledge the Woody Allen retrial by public opinion by saying ‘I dedicate my BAFTA to Philip Seymour Hoffman’. She could start a trend; I must stop paying my bus fare, instead remarking to the driver, ‘I know you expect me to buy a ticket but - Philip Seymour Hoffman!’

Blanchett’s character is a French art expert who stands idly by whilst great works are whisked away. She also stands idly by whilst she is being shot at; it’s a good thing it’s a movie. We see her watch a train depart with looted treasures, taken by the obligatory overweight German. No one wants to see him run around, of course.

Damon needs help identifying the paintings that have been taken. Luckily, Blanchett has a list. But she sees him as wanting to take European art back to the New York Metropolitan Museum of Art instead of returning it to its rightful owner, the Grand Duke of Blah-de-Blah.

In the grand tradition of SCOOBY DOO, Clooney’s team split into pairs. Mopey gets to tag along with Balaban and call him ‘Private’, which he is because you never read about Bob Balaban in the gossip columns; you won’t see him at a Chicago Cubs game or taking a bite out of someone else’s food because ‘no one would ever believe you if you told them’. Goodman hangs out with Dujardin whilst Clooney gets his own driver – of course, it’s the director’s perk. Poor Hughie Bonneville has to make his way to get on his tod and has to turn down the offer of cognac; don’t they know he’s a former alcoholic?

At one point, Bonneville thanks Clooney for giving him a second chance and you think, ‘no he’s giving you your first chance. You made it in DOWNTON ABBEY and this is your shot at Hollywood fame’. However, in the grand tradition of expendable characters he doesn’t make it. I actually wanted his demise to resemble a proper old Hollywood death: ‘I’m fading fast, light going – are the crew at Babelsberg really going to switch it off?’ Well, Germany has energy concerns. The other European in the cast also gets it; I don’t think we need to worry about subtext.

There is a seemingly nice family who have a house full of looted art (helpfully with the name of the rightful owner on the back) and there is a comic interlude involving Mopey and a dentist and you think; you don’t want to do another GHOSTBUSTERS movie but you re-hash your LITTLE SHOP OF HORRORS cameo. Dujardin and Goodman end up in a field trying to encourage a horse to smoke because - let’s face it - this art detection malarkey is a trifle dull.

At one point, the characters get hold of a map of Europe with chemical symbols by place names and this leads them to conclude that great art is hidden in abandoned salt, copper and coal mines. Then of course, the German Chancellor phones them to make an offer.

THE MONUMENTS MEN is so patently ridiculous and unbelievable that it discredits the worthy work done by the men who inspired it. Moreover, it reeks of sentimentality, no more than when Mopey receives a recorded message from home and Balaban plays it through a jeep – like that’s even possible? There are plenty of speeches about whether art is worth a man’s life and aside from the bad taste answers that come (unfortunately) to mind – ask the families of Vic Morrow or the stuntman who died on STICK – you think, I don’t think Clooney would die for this movie. The current $43 million gross is somewhat surprising; I don’t think it’ll last long in European cinemas.