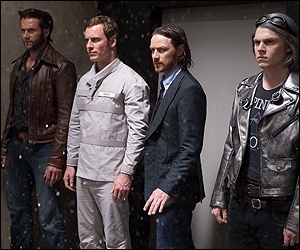 My basic qualification for a movie is: show me something I haven’t seen before. In X-MEN: DAYS OF FUTURE PAST, a character drops a football stadium (minus the playing field) around the perimeter of the White House. Touchdown, indeed! It’s a great image though I’m sure how architecturally accurate it is; I would have thought 1600 Pennsylvania Avenue would have been not such an easy fit. The other great idea in the movie is for a character’s mind to be sent back to his (could be hers) former self in order to pass on a message. Admittedly, this seems a rather limited application and it isn’t entirely logical that your mind could make the return trip, especially if the future has changed. Who said X-MEN films need cast iron logic? If they did, Magneto would bend the story into a little bow.

For those unfamiliar with the franchise, the title refers to boys and girls born with a genetic mutation that gives them special powers – to alternate between serious movies and blockbuster fare like the Academy Award winning Jennifer Lawrence. These mutants are the subject of a hate campaign that drives them into two groups. Those who wish to use their power (mind reading, freezing stuff, changing shape, moving fast, etc) for the betterment of mankind sign up for a school for the gifted run by Charles Xavier (Patrick Stewart): no fees; predicted grades are not required – what’s not to like? Those who want to use their power for evil rally around metal-manipulating Magneto (Ian McKellen).

The X-Men are, of course, a metaphor for any persecuted minority feared by society for their gifts, religion or colour of their skin. The racial aspects of their character interest Bryan Singer, who returns to the director’s chair for the franchise for the first time in ten years, the most. The first film equates mutation with being Jewish and the early films explore the link between Nazism and the military machine with various degrees of enthusiasm.

Get to DAYS OF FUTURE PAST and this idea is parked in the garage. Singer wants to show us that he has a sense of fun. He has to work with someone else’s casting decisions; the film is all about putting the cast of the prequel X-MEN: FIRST CLASS with those of the Singer-produced trilogy. It’s the X-MEN equivalent of STAR TREK: GENERATIONS (crowded cast list; you can’t kill anyone off).

DOFP picks up where X-MEN: THE LAST STAND left off - at least, I confess, so I’m told as it’s the only film in the franchise that I haven’t seen. There are mutant killers called Sentinels who look like Gort from THE DAY THE EARTH STOOD STILL whose sole directive is to eliminate all mutants and the humans who give them shelter. They can absorb an assault of any mutant power in close combat situations long enough to be able to snap the necks of any mutant attacking them. They also have a mutation Sat Nav that works even in China; if I was a mutant, I would have taken out the satellites first. Charles and Magneto – call him Erik – are holed up with the last remaining mutants, including Kitty Pryde (Ellen Page) and Wolverine (Hugh Jackman) awaiting an imminent attack. At this point, I was expecting Magneto to go off on a long journey to get help, but I was getting confused with that other franchise in which McKellen stars. Kitty’s special power is that she can send a consciousness back through time, space and credit sequences into its holder’s younger self. The mission is to stop Professor Bolivar Trask (Peter Dinklage) from developing the Sentinels. Wolverine volunteers to go back to a time when he looked exactly the same as he does now, minus the adamantine claws.

The film relies on Wolverine being able to make a quick trip from his bedroom in 1973 to the grounds of Professor Charles Xavier’s school for the gifted. Thank goodness they are in the same country. Xavier’s school resembles THE HAUNTED MANSION minus Eddie Murphy, which would have been better for the movie in my view. Beast (Nicholas Hoult) is on guard duty; don’t make him angry or he turns into Sully from MONSTERS, INC.

Wolverine has to persuade the young Charles Xavier (James McAvoy) to stop Raven (Jennifer Lawrence) who is now known as Mystique from attempting to kill Trask; her botched attempt only convinces President Nixon of the need for the Sentinel programme, putting mankind on the path of mutually assured destruction. To stop her, they will need the help of young Magneto (Michael Fassbender) – call him Erik, I can’t take that name seriously. He is in a top security prison wearing a Frank Sidebottom mask (well, I wish).

So Wolverine recruits another mutant to help with the break in – Erik is apparently being held for the assassination attempt on JFK (‘it wasn’t me; I was trying to save him’ he confesses later in one of those asides that the makers don’t know how to develop). The escape is a fun piece of slow motion doodling, illustrating what you can now achieve in ‘bullet time’ technology that you couldn’t when Singer first launched the franchise – he should send a ‘thank you’ note to the Wachowskis.

Can Erik be counted on to work with Charles, who has access to a private charter piloted by Beast? When did Beast learn to fly a plane? Will Mystique be turned back into Raven or is this just another fragrance rebranding gone awry? At least one of these questions will be answered by the movie.

DAYS OF FUTURE PAST has an engaging race-against-time plotline that probably does not withstand much scrutiny and the pleasure of getting the band back together. It doesn’t have the depth or the cleverness of a great superhero movie. Its captioning is loose: New York, Paris, China – why not name the province in China where the action takes place? Jackman’s Wolverine is a good anchor but as two WOLVERINE spin-offs proved the character is not interesting enough to hold our attention in his own right. Periodically, he foresees his own death, but this is a slightly confusing element that doesn’t in the end make us worry about him. Lawrence is tremendously assured as Mystique, taking out several US soldiers as opposed to going out with them, because she’s not that sort of girl. I missed Fassbender alternating between accents as Magneto; in FIRST CLASS, when he gets riled he sounds Irish. Halle Berry has criminally little to do as Storm, except change the colour of her eyes and take turns with initial exposition.

This pacy and fun X-MEN movie signals the re-birth of the franchise minus Anna Paquin, which I think is a rather cruel re-writing of movie history (I guess she looks too much like Lawrence). You sense Singer made it to prove he can be a reliable pair of hands. Job done, but somehow the raison d’être of his take on the franchise has been lost. Does X-MEN: DAYS OF FUTURE PAST signify the death of an auteur?