The managers' approaches, Suárez's finishing and Messi's excellence all played their part in the result at the Etihad. 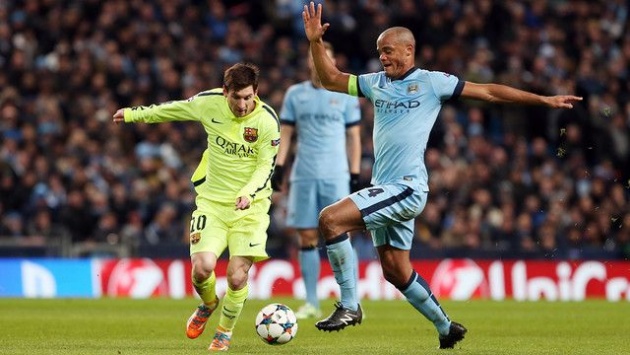 FC Barcelona got a great result in Manchester, a 2-1 win that leaves them within touching distance of a place in the Champions League quarter finals. Here are five key factors that we’ve picked out from Tuesday’s game.

• The managers’ approaches. Both Luis Enrique and Pellegrini went for attacking methods. That was not much of a surprise as far as Barça are concerned but perhaps it was somewhat from Man City. The Chilean opted to start with two strikers, Agüero and Dzeko, a brave and unexpected choice. But Barça won the tactical battle by swarming the midfield with Sergio, Rakitic and Iniesta and with Messi dropping back to great effect.

• Suárez’s finishing. The Uruguayan had only ever scored once against Man City, but he got two more tonight. He produced a fine finish for the opener and was in the right place for the second. And he had chances to get even more goals in the first 45 minutes.

• Stunning from Messi. He may have missed a penalty, but the Argentinian provided a terrific assist for the first goal and broke through the City rearguard in the build-up to the second. He finished with an extraordinary 90% in completed passes and created danger every time the ball came near him.

• Second half resistance. Man City came out much stronger after the break. But lack of accuracy in their shooting, the security generated by Ter Stegen and some fine interventions from the centre backs, especially Piqué, presented Man City from getting any further back into the match than Agüero’s 69th minute goal.

• Keeping control. Agüero’s goal didn’t stop FC Barcelona from controlling the game towards the end. Mathieu and Adriano injected some fresh blood into the team and when Clichy was sent off it was as good as game over. And they even managed to force a penalty in injury time.