Five key talking points from the victory against Levante

Luis Enrique's changes and the four strikers were all factors involved in today's impressive result. 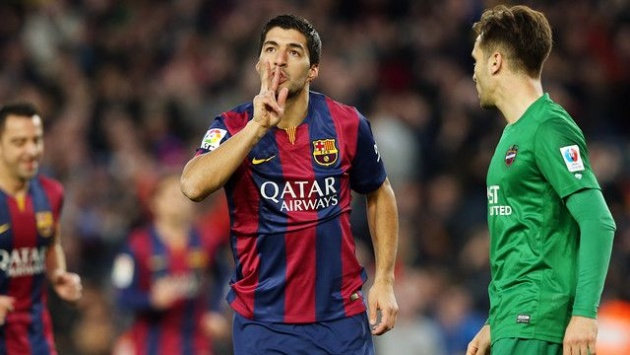 Changes to starting XI: Luis Enrique has always said that every member of his squad is important and he showed that again on Sunday by making eight changes to the side that faced Villarreal. Only Mascherano, Messi and Neymar repeated.

Pedro: The Canary Islander posted a fantastic performance in his 300th official outing for the first team. The pressure he put on Mariño to get the ball from the Levante keeper typified his exceptional work-rate, and it was his brilliant assist that created the third goal

Neymar: The Brazilian now has 17 goals in 20 league matches, and his opener against Levante was the ideal tonic following his missed penalty midweek. He’s getting better with every game and now has a total understanding with strike partner Leo Messi.

Messi. That’s a stunning five hat-tricks this season, four in La Liga and one in Europe, and a staggering 31 hat-tricks in his glittering career. Today was his 300th league appearance, and his all-time Liga goalscoring record, now at 269, just doesn’t stop growing.

Luis Suárez: The Uruguayan came on for Neymar in the 65th minute and scored a goal that will be appearing in highlights reels for years to come! After scoring at San Mamés last week that’s back-to-back league goals for a man whose name was chanted by the Camp Nou this evening.

10 Things Only Lionel Messi Could Do

Ronaldo is one: HIM! :) Ronaldo made the best 11 in history without Cristiano or Ronaldinho, but with Messi