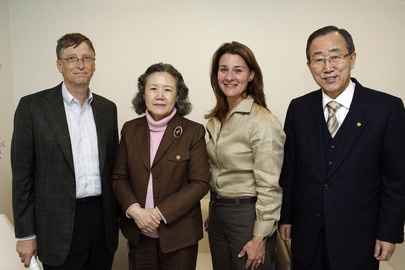 Facing huge challenges as having to produce 60% more over next 4 decades for growing global populations the UN’s IFAD and Bill & Melinda Gates have cooperation and support. The Gates Foundation is already active in areas of health, vaccination (GAVI) and education, and this represents a fresh commitment. UN Photo - Secretary-General Ban Ki-moon (right) and his wife, Yoo Soon-taek (second from left) pose for a group photo with Bill Gates (left), Chairman of the Bill and Melinda Gates Foundation and his wife, Melinda Gates. See Below Statement from IFAD & Link to IFAD at www.ifad.org/ By Ambassador Muhamed Sacirbey – Follow @MuhamedSacirbey Facebook = Become a Fan at “Diplomatically Incorrect” Twitter – Follow us at DiplomaticallyX Statement: Increasing Gates Foundation and IFAD partnership means more support for smallholder farmers Rome, 23 February 2011 – A statement of intent to build a stronger partnership between the Bill & Melinda Gates Foundation and the International Fund for Agricultural Development (IFAD) means improved support for the world’s smallholder farmers. The statement of intent was signed during IFAD’s Governing Council at its Rome headquarters today by Bill Gates, co-chair of the Bill & Melinda Gates Foundation, and Kanayo F. Nwanze, President of IFAD. Given the strong strategic alignment between the two organizations, and their role as funders of agricultural research and development in the poorest regions of the world, the agreement will build upon their partnership and boost joint ongoing work in support of smallholder farmers in developing countries. Farmers face two stark realities over the next four decades. They must produce 60 per cent more food to feed a growing, more urbanized population, and they must do so while facing increased risks related to environmental degradation, resource scarcity and climate change. With the next round of climate change talks scheduled for June at Rio+20, the United Nations Conference on Sustainable Development in Brazil, delegates to the IFAD meeting emphasized the critical importance of smallholder agriculture to climate solutions. After the signing of the statement, Gates made a presentation to Governing Council delegates and discuss the importance of agriculture and how sustainable productivity improvements can reduce poverty in developing countries. He challenged both global players and national governments to adopt a new approach to supporting smallholder farmers.