God Will Save Me 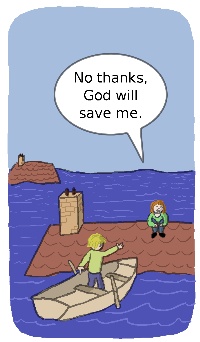 There was an old man sitting on his porch watching the rain fall. Pretty soon the water was coming over the porch and into the house.

The old man was still sitting there when a rescue boat came and the people on board said, "You can't stay here, you have to come with us."

The old man replied, "No, God will save me." So the boat left.

A little while later the water was up to the second floor, and another rescue boat came, and again told the old man he had to come with them.

The old man again replied, "God will save me." So the boat left him again.

An hour later the water was up to the roof and a third rescue boat approached the old man, and tried to get him to come with them.

Again the old man refused to leave stating that, "God will save him." So the boat left him again.

Soon after, the man drowns and goes to heaven, and when he sees God, he asks him, "Why didn't you save me?"

God replied, "You dummy! I tried. I sent three boats after you!!"