Goosebumps 2000: Are you Terrified Yet? (Book Review) 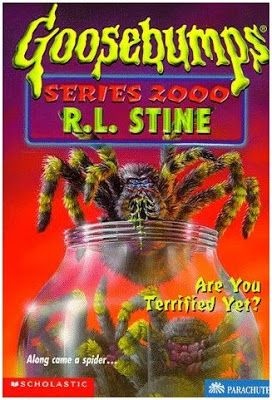 Front Tagline: Along came a spider...

Brief Synopsis:
Most Goosebumps books feature improbable scenes, but I'd be hard pressed to come up with anything less plausible than the brakes of a car with a baby in the passenger seat accidentally giving way without the driver inside, and the careening car being stopped by a twelve-year-old boy who dives in from the street to rescue the child and stop the car. No, this isn't a scene from Agent Cody Banks (I assume), it's the opening ofAre You Terrified Yet? The hero here, Craig, started the book by being scared of a leaf, so there was nowhere to go but up. His reputation for being a scaredy cat is so well-known that his classmates called him C-C-C-Craig, which unfortunately means they could never use that excellent "Did I stutter?" retort. But things are looking up for Craig, as he's just moved to a new town, a new town with abandoned babies in speeding cars.

The joke of the novel, and it's a good one, is that by consistently being cowardly, Craig is widely perceived as being brave by everyone he encounters. He fell off his bike and nearly got hit by the careening car but more or less accidentally found his way inside the car (don't ask) to stop it. The car slows to a stop in front of his new school on his first day of classes, branding him a hero to the entire student body, save a few skeptical students. The mother of the baby, who's a total MILRNLHBUIC (Mother I'd Like to Remind Not to Leave Her Baby Unattended In The Car) rushes over to thank him, revealing that while having your mom drop you off at school is embarrassing, having someone else's mom there makes you the coolest.

Craig's good fortune continues to accrue. He befriends the cutest girl in school, Amy, who is beyond impressed with his feats of bravery. Unfortunately, her best friends, Travis and Brad, are Craig's harshest critics. The boys refuse to be won over by his charms, even though he later rescues a bird's nest-- and man, if rescuing a bird's nest doesn't impress preteens, nothing will.

And so it goes, as Craig is built up to ridiculous levels of bravery by his peers. My personal favorite misunderstanding finds Craig screaming in horror at a scary movie, to which Amy agrees, it is fun to scream along with the characters in the film! Jealous of the attention being lavished on the new kid, Travis becomes obsessed with proving Craig is a scaredy cat. And Travis' cause gains traction after he talks to a distant cousin, who previously went to school with C-C-C-Craig. So Travis shows up with a jar full of spiders and dares Craig to stick his hand in the jar for five minutes. Craig is goaded on by Amy and does so, only to be bitten so many times that he can't even remove his swollen hand after five minutes are up. So Amy talks Travis into going double-or-nothing and Craig has to keep his hand submerged twice as long. Once they leave, Craig comes clean but Amy thinks that too was brave. He then washes his hands, an action which I'm sure she also found brave.

Travis pledges to go double or nothing again the following day. The bravery challenge this time will be to kiss a poisonous snake on the lips, which sounds more like a test for stupidity to me. Only the snake thing was misdirection for one of the boys plucking out their eyeball and shoving it in Craig's mouth. Craig comes out of this one looking brave by spitting out the eyeball, as though the cowardly thing to do was to swallow it? To the surprise of no one, the eyeball was a fake gag and also there was never any snake. But this too is not enough to prove Craig's bravery. And while I agree, I don't necessarily sign on for more tests either.

Travis' dad works at a funeral parlor. So now the newest bravery test involves Craig sneaking into the funeral home and sitting in a coffin. But unfortunately for him, the coffin he chooses is occupied. His "friends" egg him on anyways, as a truly brave person would sit in a corpse-filled coffin no problem. Just like all those other military generals, firefighters, and action heroes who hang around in coffins during their off hours.

But wouldn't you know it, the corpse comes to life and tries to choke Craig. It is of course Travis in disguise, and somehow Craig allowing himself to be choked proves his bravery, and Travis is shocked at how brave he really is. But then Amy challenges Travis to let Craig repeat the challenge again the next day for no reason other than that Craig is her prized pig and she keeps setting up things for him to jump over.

At some point Craig comes clean with Amy, but Amy just thinks he's not only brave but sweet to not want to take Travis' money by pretending to be afraid. Also Craig accidentally beats up Brad's older brother, and boy as much as I like this book, there's probably one too many of these kinds of scenes. But subtlety has had a restraining order out against Stine for the length of the series, so I can't say I'm real surprised.

So the big climax finds everyone back at the funeral home, where surprise surprise the corpses really do come alive. Everyone runs off while Craig bravely defends those who abandoned him, proving once and for all that he actually is brave. Also one of the attacking coffin corpses is wearing a hat, which begs one final question: Why would you bury someone wearing a hat?

But the Twist is:
It turns out the corpses were set up by Craig with help from Brad, who felt bad about how devoted Travis was to proving Craig's bravery. The zombies were actually Brad's older brother (the one Craig "beat up") and his friends. And if you thought this book already seemed a little like You Can't Scare Me!, you'll be happy to know that it proceeds to being exactlylike You Can't Scare Me! Brad's brother walks in and apologizes for his friends not being able to make it to the cemetery. This causes Brad to race away from the room so he can vomit in horror. I was getting worried that the book was so far along without a vomit scene, but there it is.

But Then the Better Twist is:
It turns out Brad's brother just said that to get back at Brad for... well, I guess if these books have taught us anything, it's that older brothers don't really need an excuse to torment their siblings. Craig walks home and remarks to the reader on how it turns out he really is brave... even if he's still afraid of the dark. Which is to say, a protagonist in one of these books doesn't get screwed and the novel keeps its charming tone. Man, based on that cover, who knew

the Platonic Boy-Girl Relationship:
Craig and his new best friend Amy, whose big mouth causes Craig's attraction to her to disappear about halfway through the book.

the RAND Corporation, In Conjunction With the Saucer People, Under the Supervision of the Reverse Vampires Alert :
Outside of the distraught mother who opens the book, there's not a single other adult in the novel. Finally, a Lord of the Flies for our generation.

Great Prose Alert:
I gazed down at the box. It showed two teenage boys and two teenage girls screaming in horror.

Conclusions:
No, but that's okay.

How to make a movie by using very simple things

I can creat a short movie by using video games like gta.. If i get more than 10000 likes on this blo…