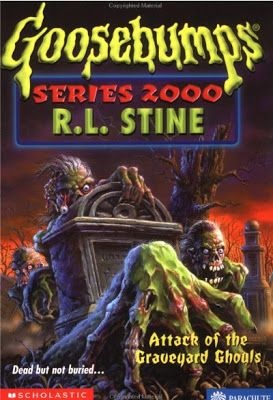 Front Tagline: Dead but not buried...

Brief Synopsis:
Spencer loves imagination and writing. Naturally, Spencer is not very popular. Inspired by a short story about fictional graveyard ghouls penned by Spencer, his teacher Mrs. Webster plans a class field trip to the local cemetery to do rubbings. She must have sent home one heck of a persuasive permission slip to pull off taking a classroom of kids to a graveyard for English class.

On the field trip to the cemetery, Spencer tries to impress his crush, Audra, by unzipping his jacket. For all his supposed imagination, this isn't quite the level of flirting I'd have expected. Unfortunately for Spencer, the most popular jerk in class, Frank, already has his sights set both on romancing Audra and tormenting Spencer. Spencer counters these efforts by suavely tripping over a gravestone. In doing so, he unwittingly unleashes the curse carved into the headstone of two teenage boys, Oswald and Martin Manse: DISTURB OUR REST AT YOUR OWN PERIL. Had he been about to perform turn-down service, this message might not have seemed so frightening, but as it is, Spencer is heroically scared shitless.

Having safely survived the field trip without endangering his peril, Spencer realizes he left his little brother's backpack in the graveyard. He had presumably borrowed the bright purple toddler's bag in an effort to emasculate himself, little knowing that Frank was already on it. With no other option save returning to the cemetery, Spencer does what anyone would do in this situation: He telephones the girl he likes and asks if she'd like to come with him because he's too scared to go alone. Boy, this kid could write a book on circling first.

On their way to the graveyard in the moonlit night, Audra tells Spencer that Frank phoned her right after he did and she told him they were headed to the cemetery. Golly, I wonder if he'll show up. Once in the cemetery, Spencer hears a strange voice calling out, "They're coming to get you, Barbara" "Give me back my head!" Oh look though, it wasn't a graveyard ghoul making the moans; it was the schoolyard cool, Frank. Audra runs for help as Frank and his buddies tie Spencer to a gravestoneand leave him in the cemetery.

Okay, so far so good. A cemetery is a spooky setting and the book's not quite half-over. Being tied to a gravestone and left alone, that's a pretty compelling predicament. Surely this book will take this and run with it, right? Um, did you forget who wrote this? You'll all be relieved to know that interesting and effective scenarios aren't what Attack of the Graveyard Ghouls is invested in. Unbelievably, this book quickly turns into another body-switching story, as the spirit of one of the brothers takes over Spencer's tied-body. Spencer's spirit is kicked out and left to float over the cemetery. Spirit-Spencer watches as Audra, flanked by her parents, comes to untie the Ghoul-Spencer and take him back home.

From his spectral position, Spencer is greeted by the other dead denizens of the graveyard, who float up and tell him about the evil boy who just took over his body. Oswald and his brother Martin were childhood arsonists who burned up most of the town over a century ago, and that Spencer should probably not expect him to retreat to his grave without some effort. However, the spirits do let slip that there is one way for Spencer to get his body back, but it's a secret. The spirits then start spookily dancing in a classic "Oh Cool, I've seen Carnival of Souls too" moment.

This is followed by an even more gruesome scene. Spencer watches as a horde of graveyard rats descend upon a small bunny rabbit, devouring the small creature in a matter of seconds. Spencer looks down at the rats congregating in the fresh puddle of blood among the discarded bits of bone and thinks "Hey, that's the life for me!" Yes, Spencer descends down and takes over the body of a rat in order to escape the graveyard. This leads to several "Rat eats gross things" moments that would cause even Templeton to lose his appetite.

As Rat-Spencer makes his way back home in order to warn his parents that their son is not their son, he encounters his family cat. Just when things look bleak for the rat, Spencer trades bodies and inhabits the cat. Boy, after like, what, twenty books where something like this happens, it's pretty hard to pretend it's interesting. Thankfully the book makes up for this familiarity by just getting Cat Tornado-level insane in the last act.

Occupying the body of the family cat, Spencer tries to get his parents' attention. This doesn't work using conventional cat methods, and Spencer's more human attempt to write a letter to his parents explaining the whole situation fares no better. I'll let Spencer's dad take this one:

"Dumb cat. It's a little late to be playing with pens."

Unfortunately for Spencer, the Ghoul-Spencer recognizes that Spencer's spirit is inside the cat. He tells the cat that he has no intention of going back to the cemetery. Then he just gets really selfish and starts complaining about how lame Spencer's body is and how the first opportunity he gets, he's going to upgrade to a better body and just destroy Spencer's used body. You know, I don't think I like undead teenage murderers.

Ghoul-Spencer locks the cat in a wooden crate and throws him down into the basement. A spider crawls into the crate and Spencer escapes once more. Yawn. Let's speed this up to the good parts. Spider-Spencer makes his way upstairs and takes over the body of his little brother Jason. Using his new human body, Spencer trots over to Audra's house to convince her of his predicament. Only when he looks into her eyes, he can see that she's either a graveyard ghoul or starring in an episode of the X-Files, as her irises have turned black. Realizing that the other brother must have taken over Audra's body in the cemetery, he races back to rescue her.

On his way to the cemetery, he sees Ghoul-Spencer wreaking a line of destruction down the street. Several cars and houses are on fire. A cop tries to shoot Ghoul-Spencer but Spencer-Jason distracts the police officer in an attempt to save his body. Ghoul-Spencer rushes off into the darkness and Spencer-Jason races to the graveyard. He tries to communicate with Audra while simultaneously fending off hundreds of spirits who want to inhabit Jason's body. Spencer finally gets Audra to inhabit the body of a stray black lab. In the rush to leave the cemetery though, Spencer-Jason accidentally trips over another headstone. Fearing what wrath he's incurred this time, he reads the cryptic message carved in stone: "Defeat Death Only By Living." Spencer dismisses this curse as too artsy and the boy and the dog race out of the graveyard.

Okay, remember when I said the book gets crazy? The destruction has gotten far worse, as Ghoul-Spencer, now joined by Ghoul-Audra, have stolen axes from the firemen and are now racing down the street, chopping up cars and windows before setting fire to the houses. Two preteens racing down a street and swinging axes is an admittedly perverse and interesting image, and unbelievably the book only gets weirder. Ghoul-Spencer sets fire to Frank's house and waits for him to come out so he can steal his body. He then gleefully tells Spencer-Jason that he's going to throw Spencer's body into the housefire and watch it burn. Spencer-Jason tries to convince him to watch one of those DVDs that show a roaring fireplace instead, but to no end.

Okay, remember how I already said the book gets crazy and then I told you guys about all the crazy stuff that happened? Still not the craziest part. In the midst of all this violence, Jason's spirit shows up and demands being let back into his body. As Spencer-Jason wrestles against Jason reentering his body, Jason's body starts spastically jerking and wailing in rhythm. During the fight, Spencer-Jason notices that the two ghouls have stopped their mayhem and are doubled over in pain. This is when Spencer-Jason realizes that the ghouls are being tormented by his dancing. Thinking back to the gravestone he toppled, he realizes that the best way to show life is to dance. Spencer-Jason begins dancing wildly and enthusiastically. He even grabs the poor dog and starts dancing with the it out in the street. This is like the worst novelization of a Gene Kelly movie I've ever read.

But the Twist is:
The dancing causes the ghouls' spirits to leave the bodies of the children and everyone tries to go back to their correct bodies. Unfortunately, Audra and Spencer end up in each other's bodies, seemingly forever-- though that's probably only a bad turn of events for one of them.

the Platonic Boy-Girl Relationship:
Spencer and his crush Audra, who disappears into a dog two-thirds of the way through the novel.

Questionable Teaching:
Mrs. Webster took the kids she liked to hang out in the graveyard. She did class rubbings, she learned you never had to press hard.

RL Stine Shows He is Down With the Kids:
Early in the novel, a food fight erupts at the dinner table. What is it with RL Stine and this notion that food fights are something that exist? Arsonist ghosts who take over the bodies of children, sure. But kids throwing food at each other? GIMME A BREAK. But seriously, I've eaten food before, and often in the company of other people, and I've never witnessed this phenomenon. I'm of course talking about the arsonist ghosts taking over the bodies of children

Vomit Alert:
Attack of the Graveyard Ghouls was the first Series 2000 book to not feature vomit. Which is a good thing, because there's pretty much only one Chuck I'm Up on:

Memorable Cliffhanger Chapter Ending:
Ch. 3/4:
A hand reaches up from the ground and grabs Spencer's ankle. Only no, it was... nothing. And is never later revealed to be anything. Kind of makes me long for the days when Stine at least tried to come up with something. Well, since he couldn't be bothered to make something up, I'll heed the call-- It wasn't really a corpse's hand that brushed against Spencer's ankle, it was.... THE HORN OF A UNICORN!

Great Prose Alert:
"He must have been a bad dude," Audra replied thoughtfully.

Conclusions:
Axe-assisted arson aside, how many times am I going to have to read the same book?