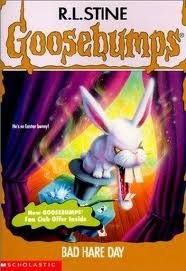 Front Tagline: He's no Easter bunny!
Back Tagline: Pick A Scare. Any Scare.

Official Book Description:
Trick cards, floating scarves, disappearing doves. Tim Swanson loves magic tricks. Someday he wants to be a real magician. Just like his all-time favorite hero, Amaz-O.
But then Tim goes to Amaz-O's show. And he finds out his idol is a total grump. That's when Tim decides to steal the bag of tricks. Amaz-O's bag of secret tricks. Scary tricks.
The one with the multiplying red balls.
And all those hissing snakes...

Brief Synopsis:
Tim Swanson is an amateur child magician. To be fair, that is likely the only sort of magician you can be at age twelve. He performs tricks from a magic kit for his classmates after school on a daily basis, which is sort of suspect anyways, but he also manages to draw a crowd for these tricks, which is really when the book's credibility is blown. After his peers are "amazed" at how he can guess their card and separate metal rings, his little sister Ginny comes by and mocks his magic, revealing the secrets to his tricks to the audience, and also karate chops him in the stomach. Ginny is the character the reader sympathizes with in this book.

After his magic show breaks up (when they realize Ginny isn't going to hurt Tim again, the audience leaves), Tim and his best friend Foz decide to stop by the magic shop to look at the new tricks. I'm not sure how much money a magic shop can pull in on a daily basis, but I'm assuming the owner has some sort of magic tree that grows magic money that pays the magic bills. Or maybe he just lost a bet or something.

The owner of the magic shop gives Tim and Foz two free tickets to see Tim's idol, the magician Amaz-O, at a local nightclub the next night. Tim tries to convince his parents to let him go, but they for some reason object to their prepubescent son going to a night club at ten at night.

The day of the big magic show, Tim gives another magic show, this time at his house, where he displays a trick he constructed in the garage: a homemade trick-compartment table for making a rabbit disappear and reappear. He borrows Foz's sister's rabbit and the trick goes awry and the rabbit gets away but is then caught by Ginny, who karate chops a stream to trap the rabbit. I don't know either.

Tim's parents come home that night exhausted and go right to bed. Tim gets the fairly obvious idea to sneak out of the house and go to the nightclub anyways, which he does, but not before being caught by Ginny, who insists on going with him. The two talk their way into a nightclub unescorted, and are seated in front of the stage. Amaz-O comes out beforehand and asks Tim to be his volunteer later in the show. Amaz-O then begins his show, and if he's the world's best magician, I would really hate to see the world's worst. His act consists of doves flying out of his hat, pulling a rabbit out of a hat, and many other stereotypical, boring (even on magic-terms) tricks. In the book's single most bewildering scene, Amaz-O tried to thread a needle on stage, gets frustrated, shoves a handful of twenty needles into his mouth, swallows a long thread of string, closes his mouth, and pulls out a perfect strand of threaded needles. Never has any magician put so much effort into being boring.

Amaz-O calls for a volunteer and Tim goes up, is placed into a magic cabinet, and is delivered to what the magician calls the "5th dimension," or what we might call "the basement." He falls thru a trapdoor and lands on a mattress in the nightclub's basement. He hears Amaz-O leave the stage and end the show. Tim also find the basement door locked and he breaks his way out of the room and finds Amaz-O's dressing room. He starts to enter but a voice inside tells him to "Beat it, punk!" Taken aback at being called punk, Tim proves himself to not be a punk by stealing the magician's suitcase of tricks to get back at him. Tim and Ginny evade a cadre of security guards and bike home. Ginny insists on Tim sharing the suitcase with her and the two hide it in the attic, promising to not disturb it until Saturday, when they will have time to examine the contents more closely. This being a Goosebumps book, Tim does not follow this simple plan and instead opens the magic case later that night, and discovers an amazing array of boring magic tricks. By the way, we're two thirds of the way through the book and nothing has happened yet. Don't worry though, nothing he finds in the suitcase changes this.

The suitcase has a sound effect that plays when you open it, a large exploding boom. That's not even sort of a magic trick, but okay. Inside Tim finds a cup and ball trick, a bunch of mechanical glass snakes, a wand, a jacket, a zzzzzzzzzzzzzzzz

Tim closes the case and decides that he must pull himself away from the remarkably unremarkable tricks in the suitcase and go to sleep. In the morning, their parents don't suspect a thing, but that doesn't stop Ginny from telling her mom she and Tim have a secret. This leads to the worst dialog exchange I've ever read, and I have taken part college creative writing workshops: Mom asks if Ginny said she has a secret; Tim says no, she said she wants a wee pet, as Ginny has been studying Scottish literature and dialect and was speaking as a Scot. No, that's really his explanation.

Finally it's Saturday, and Foz has come over to see the incredibly boring magic tricks Amaz-O's kit contains. Tim attempts to perform some of the tricks, but they all go awry. First, instead of disappearing, red balls keep appearing under cups in the cup and ball trick, and keep appearing, until he just throws them all in the suitcase and shuts it quickly. Tim then has doves fly out of his hat, but the doves won't quit flying out of his hat, and the attic fills with doves. The kids quickly leave the attic, taking the kit with them. Tim reasons that maybe they should play with the kit outside, so if there's anymore animals, they can just fly away. Foz and Ginny, quite rightly, are less interested in continuing the magic show, and more interested in anything else at all. Somehow he convinces them to join him outside. Ginny roots around in the magic kit, finds a carrot, eats it, and turns into a rabbit. There are 117 pages in this book. It took 91 pages for something to actually happen.

Tim and Foz can't figure out how to turn Ginny back into a human, so they decide to return the kit to Amaz-O and get him to turn Ginny back into a human. They break into the nightclub and find Amaz-O's lifeless body on the couch of his dressing room. Upon closer consideration, Amaz-O is actually a large puppet! Keep in mind that Tim talked to and appeared on stage with this puppet and somehow never noticed the man he was talking to was a large puppet.

A voice in the room begins to berate the children, and this is certainly welcome from the reader at this point. They discover that Amaz-O's rabbit is the one speaking. He continues to insult them, which again, is enjoyable, and then explains that he, the rabbit, is Amaz-O, and he was turned into a rabbit by a sorcerer. The rabbit and Tim have what is honestly a witty little conversation about the sorcerer's name. This exchange is the only time in the reading this novel that the book improved on the first blank page. So interesting is this crass rabbit that I can't figure out why I spent 110 pages without meeting him, only to have the book end just as something interesting finally occurs.

The rabbit goes on to explain that he built the puppet to do his stage work while he was stuck a rabbit. This makes no sense, but whatever, compared to some of the logical processes of these books, it makes the most sense I've ever heard. The rabbit tells Tim that his sister will change back to a human in less than an hour, and then makes Tim a very interesting offer.

But the Twist is:
Tim agrees to be part of Amaz-O's act, but doesn't realize that he'll be taking over the rabbit portion of the show. Wah-wah.

the Platonic Boy-Girl Relationship:
Tim Swanson is constantly tormented by his sister, Ginny Swanson, who turns into a rabbit 7/8 of the way thru the novel.

Questionable Parenting:
Tim's mom tells him that twelve is not "a cute age."

Memorable Cliffhanger Chapter Ending:
Ch. 3/4:
Tim ponders whether he could ever change his sister into a rabbit. This plot cliffhanger is then finally addressed 70 pages later.

Great Prose Alert:
"My nose is long and curves up at the end like a hot dog. Ginny likes to flick the end of my nose with her finger and say 'Boi-oi-ing.'"

Conclusions:
It takes a special sort of author to make magic more boring than it already is, but RL Stine is that, let's say talented. Bad Hare Day is without question the least interesting book I've read yet in the Goosebumps series.

Bad Habits and how to get rid of

I have bad habit which is drinking tea day and night, that sometimes I forget to drink water even fo…