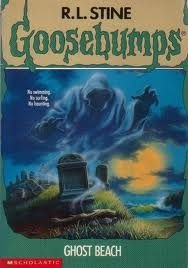 Front Tagline: No swimming. No Surfing. No Haunting.
Back Tagline: Do You Believe In Ghosts?

Official Book Description:
Jerry can't wait to explore the dark, spooky old cave he found down by the beach.
Then the other kids tell him a story. A story about a ghost who lives deep inside a cave.
A ghost who is three hundred years old.
A ghost who comes out when the moon is full.
A ghost who is haunting the beach.
Just another stupid ghost story. Right?

Brief Synopsis:
Stay with me guys because this one is a little hard to follow since every character has the same name.

The novel starts out with our sibling heroes the Sadlers, Terri and narrator Jerry, investigating a graveyard. Terri, the younger sister, loves making etchings of tombstones. While in the process of etching a tombstone, Jerry notices a pair of zombie hands shooting out of the ground. Terri and Jerry try to escape but it's too late as the zombie hands are clutched tight to Terri's ankles. It's all over it's all over it's all a dream.
A DREAM.
R.L. STINE STARTED OUT A BOOK WITH A DREAM SEQUENCE.
A DREAM.
THE BOOK BEGINS WITH A DREAM SEQUENCE.

So, really, with nowhere to go but up from this 8th grade creative writing assignment-level of storytelling, we discover the real tale a foot here. Jerry and Terri have been sent by the parents to spend a month on the beachfront with their distant cousins Brad and Agatha Sadler, an elderly but lovable eccentric couple. In the course of fooling around on the beachfront the siblings meet a trio of young kids doing what all kids love to do, flying bat-shaped kites. This sibling group consists of two boys, oldest Sam and toddler Nate, and a young girl named Louisa, all three with the same last name as our heroes, Sadler, and all three possessing the same freckle-pattern as the other Sadlers. Hmmmmmmm. If this seems like a lot of characters (with no identifiable differentiating characteristics besides their respective ages) for our heroes to run into, you're right. And no there's no big reason to have them all, even after the big reveal, they're just there. Maybe R.L. Stine gets paid by the character.

The Sadler Trio tells the Sadler Duo about how in the cave above the beach there lives a deadly ghost who comes out when the moon is full. He's not a werewolf or anything, but I guess when you're a ghost and can't keep a calendar you've got to mark the passing of time somehow. After the group stumbles upon a dog skeleton that seems to affect the Sadler Trio a little too much, they explain that ghosts hate dogs because they can sense when they are around, so the dog was probably killed by the deadly ghost from the cave. The Sadler Trio also tells the siblings that sometimes you can see a spectre of light in the cave. Later in the book Brad attempts to convince the Sibling Duo that this glowing is merely the northern lights. In a cave. No really, that's his explanation.

Of course, the lure of a ghost leads the duo to go investigate the cave and while inside they find the source of the mystery light: the northern lights. It turns out Brad was right. Except no, it's actually being caused by the candles being lit by a creepy old man with long white hair and a thin gaunt body who lives in the cave. Jerry and Terri flee the cave and tell their new friends about the horrifying ghost they encountered. The Sibling Trio tells the Sibling Duo that they have a plan for stopping the horrible ghost from tormenting their beach towne any longer.

The plan involves the Sibling Duo knocking over a bunch of rocks at the front of the entrance to the cave, thus keeping the ghost inside forever. The trio explains that the cave serves as a sanctuary and a ghost can't escape from within if it should be trapped inside. As the Sibling Duo sets goes to try to trap the old man inside the cave, they are accosted by the ghost and dragged within his lair. He sets them down infront of his desk and tells him what the reader has already figured out fourty pages earlier: the old man isn't a ghost, he's their distant relative. The Sibling Trio are the ghosts. Even though Jerry and Terri had stumbled upon the graves of these three earlier in the book, somehow they have trouble believing this story. The old man tells them that he will let them go from the cave if they promise to go check the far right side of the cemetary. It is he hope that they will return and aid him in trapping the three (ghost?) siblings in the cave by the same methods they had earlier suggested for trapping the old man.

When the sibling duo escapes and goes to check the cemetary, they see two freshly dug graves with their names on the tombstone. And yet this too is not enough to convince these kids. Finally the whole gaggle of kids goes to trap the old man ghost once and for all, yet the old man tricks the sibling trio into resting in the cave, which they are then bound to because of the scientific rules of magic caves. Then, finally, to prove that the kids are ghosts to the other kids (gosh, this is all so confusing), the old man calls his trusty german shepard who has never even been referenced until the last ten pages of the book. The dog goes crazy on the children, establishing a literary beating of a dead horse as they are finally "revealed" to be ghosts to the surprise of exactly no one but our heroes.

In the first and last "scary" moment in the book, the three prepubescent children stare at the two human siblings and suddenly their ghostly skin peels off and the horrible skeleton children are calling for the non-ghost brother and sister to stay in the cave with them. Not surprisingly, Jerry and Terri decline and the old man is trapped with the ghosts in the cave forever. The two human siblings go back to tell Brad and Agatha all about their adventure, and the elderly couple is very relieved that the children are safe.

But the Twist is:
Suddenly the old man's dog conveniently bursts into the beach-home and starts going crazy. Are the human siblings actually ghosts?!?! No, that's not nearly insulting enough. It's the elderly couple who are secretly ghosts. The novel ends on a high note with the elderly couple plotting the murder of the innocent children.

Questionable Parenting:
The parents of these two gave their kids rhyming names, then many years later they've sent them off to spend a month with ghosts who want to kill them. Now, I've never read any child-rearing books, but I'm pretty sure that's some real shitty parenting right there.

Foreshadowing Alert:
Brad and Agatha tell the two siblings that they'd find their names on a gravestone if they looked. Hey, way to cover your ass.

Memorable Cliffhanger Chapter Ending:
Did you read the beginning of the synopsis? Go read it again because Jesus Christ.

Great Prose Alert:
"I kept my mouth shut. I knew that ghosts weren't supposed to be real. But what if all the scientists were wrong?
There are so many ghost stories from all around the world, how can ghosts not be real?"

Conclusions:
Almost all plot (if you couldn't tell by the "brief" synopsis), Ghost Beach in the series takes itself a little seriously but because of the removed locale it doesn't fall into nearly as many missteps as some of the more contemporary titles. A solid but ultimately tedious entry. Also, I don't know if I mentioned this but R.L. STINE STARTS THE BOOK WITH A DREAM SEQUENCE.

Edited by: @artbytes via Bitlanders May 5, Saturday. My wife's family decided to go and have a brea…