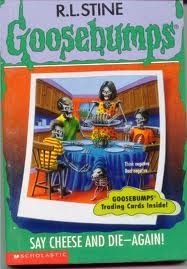 Official Book Description:
Sourball. That's what Greg calls his English teacher, Mr. Saur. He's a real grouch. And now he just gave Greg a big fat "F" on his oral report.
He didn't believe Greg's story. About the camera Greg found last summer. About the pictures it took. About the evil things that happened.
Poor Greg. He just wanted to prove old Sourball wrong. But now that he's dug up the camera, bad things are happening. Really bad things. Just like the first time...

Brief Synopsis:
So here we are, back again with Greg and Shari, the two intrepid (sorry, I mean insipid) heroes of the first Say Cheese and Die! A year has passed since the events of the first book. Greg gives an oral report in his English class about his adventures with the evil camera, but for some reason, his English teacher Mr. Saur doesn't believe him and gives him an F, in front of the entire class no less, which is something teachers often do. He chides Greg on giving an oral report on a lie when the assignment was to tell a true story. Greg reveals that all the students hate Mr. Saur because he is so prickly, and that they call him Saur Sourball behind his back. That seems awfully redundant though when they could just call him Saurball.

Mr. Saur tells Greg that if he can prove his story is true, that the camera is evil, than he will give him an A. Greg decides it would be a good idea to go back to the abandoned house where they left the camera and retrieve it, which his friends are against, mainly because the last time they had their pictures taken, they were all, you know, horribly maimed or erased from existence. But Greg valiantly decides his grade is more important than anyone's safety. That night, he sneaks out to the Coffman House, only to find the house demolished, with even the basement torn out. He despairs until he meets a young boy named Jon whose father recently bought the land. He explained that the wrecking crew had just torn the house down and that everything in the house is in a large dumpster. Greg goes digging around in the dumpster and finds the camera hidden beneath a dead raccoon carcass. Say Cheese and Yuck.

Greg tries to tell Jon he's only borrowing the camera but Jon struggles with Greg for the prized possession and the camera goes off. Of course it does. There's like eight pictures taken in this book and seven of them happen because of a struggle. The picture reveals Jon on the ground in agony, a large roofers nail poking out of his foot. Jon runs to go find his dad to make Greg give up the camera when he, you guessed it, turns out to really be a dog.

Jon's father rushes his son to the emergency room to have the nail removed and Greg slinks away back home. The next morning, Greg tries to sneak out of the house but Shari catches him and tries to stop him from taking the camera to school. Another scuffle and another picture is accidentally taken, this time of Shari. But the camera produces a normal photo, but in a negative image. Shari maliciously grabs Greg's camera and takes a picture of him in retaliation for, well, for her scuffling and causing the first photo to be taken in the first place.

The photo develops and reveals Greg to weigh about 800 pounds, with huge quadruple chins and giant rolls of fat. Greg panics and hides the photos in his back pocket. He scrambles to school and bursts into Mr. Saur's room, but he has fallen ill and there's a substitute instead. Greg locks the camera in his locker and the rest of the day is filled with Greg getting progressively fatter and fatter. I imagine this book did a whole lot of damage for young adult readers with weight issues, as they probably went around blaming being fat on having their picture taken with a magical evil camera, and not, you know, Cheetoes.

The next day, Greg has gained maybe 20 pounds from the day before. He goes to see Mr. Saur but he's having a meeting with the principal and won't speak to Greg until class. Once class starts, Greg interrupts a girl giving a report on her cat to force Mr. Saur to look at his proof, the magical evil camera. Unfortunately, Greg gained 100 pounds since when he came into the class and is stuck in his desk. He manages to squeeze out and brings the camera and the snapshot of Jon's nail in the foot over to Mr. Saur. Mr. Saur makes fun of him in front of the class some more and Greg leaves in tears, waddling out of the class. In the hallway he runs into Shari. At that precise moment, Shari's skirt falls down off her waist and wraps around her ankles and the book gets a whole lot sexier. Shari pulls up her skirt and tells Greg that she's lost a bunch of weight and none of her clothes stay on any more.

RL Stine stops his Flesh Gordon-cribbing and treats the reader to the further humiliation of a fat person by their peers. Greg gains over 300 pounds by the end of the day. His parents think it must be an allergic reaction and schedule an appointment for the next day. At school the next day, he runs into Shari, who has lost so much weight that she is described as looking like a stick with a lemon at the top, which is really sort of unappealing. She then tells him she was late to school because the wind kept blowing her over. In class, Mr. Saur mercilessly mocks Greg, telling him when he walks in that he's clearly too fat to sit in a desk, so he should stand over by the window. But not directly in front of the window or he'll block the sun. I wasn't aware middle school teachers had tenure.

After class, Greg's father shows up in a large van that he rented so he could haul Greg to the doctor. At the doctor's office, the nurse loses her stethoscope in the folds of Greg's fat.

That night, Greg goes over to Shari's with the camera so they can figure out what to do. Why not just tear up the photos like in the last book I had been asking this book, out loud, for the past 30 pages? Because they are afraid they themselves might get torn up into little pieces. No, a better idea would be for them to take new photos of themselves, and maybe that will reverse the process. Okay. Shari takes a picture of Greg and in the snapshot he is covered in scales like a reptile. Greg begins to itch all over his body as his skin flakes off in huge chunks and falls to the floor. Say Cheese and Gross.

Greg gets another idea: He'll go visit his older brother, who works in a photo development lab, and have him print a negative of both their pics. That is, a positive of Shari's negative and a negative of Greg's positive. The older brother does this for them and when they wake up the next morning, all is well. WHAT A CLIMAX.

But the Twist is:
Greg, still bitter about Mr. Saur refusing to raise his grade, takes the camera with him to take a picture of his teacher. Greg's killed people with this camera, so this is clearly RL Stine's Columbine/Elephant moment. Greg confronts Mr. Saur and Mr. Saur, you guessed it, scuffles with his student and grabs the camera, taking a picture of the entire classroom full of students.

the Platonic Boy-Girl Relationship:
It's still Greg and his best friend Shari, whose waistline disappears half-way thru the novel.

Questionable Parenting:
When Greg begs his parents to not force him to go to school in his condition, they tell him to just suck it up and tell his friends that he's sick and they won't make fun of him. This is directly followed by a scene where Greg can no longer fit into the family's Honda Civic.

Great Prose Alert:
"Sweat poured off my forehead and rolled down my round cheeks and chins."

Conclusions:
I wonder if I took a picture of Say Cheese and Die--Again! with an evil magic camera, would it gain anything in quality? Because there's nowhere to go but up. This was, as you can imagine from reading the synopsis, stunningly bad, even for a Goosebumps book.