Goosebumps: The Beast from the East (Book Review) 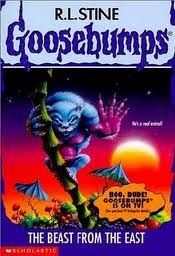 Front Tagline: He's a real animal!
Back Tagline: Every Beast For Himself!

Official Book Description:
Ginger Wald and her identical twin brothers, Nat and Pat, are lost in the woods. No problem. After all, Ginger did go to that stupid nature camp.
Still, there's something odd about this part of the woods. The grass is yellow. The bushes are purple. And the trees are like skyscrapers.
The Ginger and her brothers meet the beasts. They're big blue furry creatures. And they want to play a game. The winners get to live. The losers get eaten....

Brief Synopsis:
Oh man.
Our heroine Ginger Wald, a former nature camp survivor, is on a vacation with her family in the woods. Besides her mother and father, there's her two twin brothers, Pat and Nat, who are both more interested in playing videogames than nature. Ginger's father tells her to go "lose" her brothers in the woods, and sure enough her and her brothers find themselves lost in the woods. This will be the first and last time anything in this book follows a logical series of events.

While lost in the woods, Ginger and her brothers encounter some strange plants, some of which rub off different colors on Ginger's hands. They also spot some strange animals, like a small creature that resembles a squirrel and a dog. The ground begins to shake in a clearing and the kids hide behind some bushes just as a Beast appears. The Beast is an eight foot tall blue furred bear-like creature with a long snout and beaver-like tail. He sniffs around, then leaves, then re-enters, then leaves again, and continues to behave in this manner until RL Stine has reached an appropriate number of chapter breaks. Finally the Beast leaves and the kids decide to make a run for it, but only Pat manages to escape, leaving Nat and Ginger trapped by an entire community of Beasts. The main Beast approaches Ginger and, stay with me here, slaps her back and declares that she is "It." What.

The Beasts explain in perfect English that they are playing a game called "Beast From the East" and Ginger is now "the Beast From the East." HEY GUYS, THAT'S THE NAME OF THE BOOK. She has until the sun sets to tag another player or she gets eaten, so it's very similar to normal tag. Ginger tries to get the Beasts to explain the rules to her but of course for that to happen RL Stine would have had to have come up with a concrete series of rules, so of course the Beasts act as though this request is an absurd one.

We are also introduced to several of the Beasts. One's named Fleg, another Gleeb, and a third is called Spork. Spork is missing an eye, which is important because... April Fools, it's not important at all. The creatures also speak in a sort of pidgin English that is combined with made-up words like "trel," which really adds sparkling detail to the complete and utter bullshit of the novel.

Again, Ginger attempts to get the Beasts to tell her the rules, but they are under the impression that these kids have played before, in part because the children keep saying, and I'm quoting here, "We have no idea how to play. We've never played before. Tell us how to play." However, the Beasts do manage to spell out a few rules, such as how if they rest on a Free Lunch square, which is a brown square in the woods, they can be eaten. Again, these are basically normal Tag rules.

The Beasts give the two kids a head start and then a series of misadventures occurs. First Ginger is wrapped around a tree by a bunch of snakes. Fleg appears and frees her by tickling the snakes. She is also awarded 20 points for being wrapped in snakes. Fleg tells her she could get 60 points if she was bitten. She is also awarded points for all those colors she rubbed off on her hands from the strange landscape. He tells her that she missed her chance to tag him and that sets in motion Ginger's determination to tag one of the beasts. After this happens, Nat climbs a tree but the tree comes to life and tries to kill him or something, I don't know. What I do know is Ginger stops the tree from killing her brother by tickling it. She tickles the tree. This works. This book sucks.

Nat spots a group of Beasts hiding behind a large boulder. When Ginger approaches the boulder, she finds the Beasts have all scattered away. Nat touches the boulder and it splits open at the top and smoke comes out and the Beasts appear to tell her that her brother has touched a Penalty Rock and must now face the penalty. Ginger follows the Beasts to a large wooden cage where her brother will be kept until he is eaten. Ginger tags one of the Beasts, but the Beast informs her that the game is paused so it doesn't count.

Ginger is on the run again, night is closing in. If she doesn't tag another Beast by nightfall, she will lose and be eaten. She falls into a Free Lunch pit and the Beasts gather around, prepared to eat her. However, a cloud appears overhead and the Beasts tell her that she was lucky, according to the rule of "Made in the Shade" she can't be eaten. They help her out of the pit. Did RL Stine just publish a first draft or something?

Ginger spots a child Beast and assumes (correctly) that there's an adult Beast, perfect for tagging, hiding nearby. And sure enough, there's Spork, hiding behind a boulder. She tags him and is victorious until Spork tells her that it doesn't count because she didn't tag him from the east. Oh, right, of course, because there's still 30 pages left. Ginger tricks the Beast into pausing the game to play another game with her. He agrees to this, since Beasts apparently act without motivation pretty regularly according to this book. She tells him the two of them are going to spin around and around as fast as they can and then stop and the first person to fall down loses. As he's spinning, Ginger declares the game unpaused and tags Spork. It worked, Spork is now the Beast From the East. He tells her that he still has a little time before the sun sets to tag her back, and Ginger is given another head start.

Ginger runs through the woods and finds Pat, her other twin brother that escaped earlier in the book. The two of them make their way through the strange jungle and are approached by one of the squirrel-dogs, who tells them they can hide in "the Hiding Cave." The two kids go into the cave and then the squirrel-dog tells them that the cave is also used by bugs to hide. They are soon covered with millions of different insects, and Ginger wants to scream but at that very moment the Beasts walk by the cave. Seeing nothing but insects inside, the Beasts pass on their way and the two kids exit the cave. The squirrel-dog wishes them luck, but tells them that according to the rules, they can only use the Hiding Cave once.

The two kids find the strange tree that is the homebase for the game, just as the sun sets. Ginger has made it! She's won! She's... tagged. Silly Ginger, the game isn't over until the game is declared over. Ginger is the Beast From the East, she loses. And Pat, as her "Helper," thus also loses. The two are brought before a big fire, where they are informed that it's barbeque night.

As the Beasts prepare a cooking dish for stewing the two kids, Nat appears in the clearing! He has escaped the cage and came back to rescue his siblings. But instead he is captured fairly quickly by the Beasts. Seeing the two twins together, Fleg gets furious. The kids did not tell the Beasts that they were going to double, thus using the move called "the Classic Clone"! That's a Level Three move, these Beasts are only Level One players! The Beasts let the kids go, apologies. The kids are told which way through the woods will lead them back to their parents and all is well.

But the Twist is:
On the path, they are stopped by a Beast. Ginger informs the Beast that he must not stop them, for they are Level Three players. The Beast is quite pleased to hear this, as so is he! He tags Ginger.

the Platonic Boy-Girl Relationship:
Ginger Wald and her twin brothers Pat and Nat, one of whom disappears half-way through the novel.

Questionable Parenting:
Telling his daughter to lose his sons probably sounded like a funny joke at the time, but imagine how awful that dad must feel once it came true. He should have told Ginger to find a sack of money.

Memorable Cliffhanger Chapter Ending:
Ch. 29/30:
Ginger has to scream, she just has to, she's going to scream... Eh, maybe not.

Great Prose Alert:
"The explosion roared like a million firecrackers going off at once."

Conclusions:
Basically a novel-length account of a game of Calvinball, the Beast From the East is a pretty odd and unsatisfying entry in the Goosebumps series.