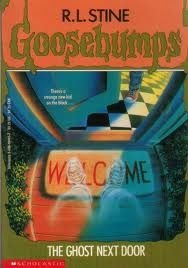 Front Tagline: There's a strange new kid on the block...
Back Tagline: "How Come I've Never Seen You Before?"

Official Book Description:
Hannah's neighborhood has just gotten a little--weird. Ever since that new boy moved in next door.
But when did he move in? Wasn't the house empty when Hannah went to sleep the night before? Why does it still look deserted?
She's not getting any answers from her new neighbor. He just keeps disappearing in the oddest ways. And he's so pale...
Is Hannah being haunted by...
...the ghost next door???

Brief Synopsis:
Hannah Fairchild is having a boring summer at home after all her friends leave town for the break. She tries writing to them but they don't ever seem to write back. She spends some time with her little brothers, even making a campfire in the backyard and telling ghost stories one night, but it doesn't really seem like enough. However, the day after having a horrifying dream about her room being on fire, she meets her new next door neighbor, Danny. She doesn't remember Danny moving in and he claims he goes to her school and though they are supposedly in the same grade they don't any of the same people. Hannah begins to suspect that Danny is not all he seems, as he keeps disappearing into thin air everytime she turns around. It is then that she makes the logical conclusion that this boy is a ghost.

After she spies Danny downtown with a pair of trouble-making kids, Alan and Fred, she is persued by a shadowy figure. This same shadowy figure will persue her more and more as the novel progresses, even slipping out of the bushes in front of her house and threatening her to stay away from Danny! All the while Danny is getting into worse and worse trouble with his excursions with Alan and Fred. The two dare him to steal ice cream cones and destroy mailboxes. After they are caught trying to break the Postmaster's mailbox and Danny gets treated in a less than Fragile manner by the man, Alan and Fred tell Danny that they have to get back at the Postmaster! Naturally, Hannah has been following the three around town the entire time and has spied the whole ordeal! She tries to warn Danny but he is less than responsive to her pleas, especailly when she accuses him of being a ghost. This is immediately followed by Danny accidently putting his entire hand through Hannah's chest and running off in hysterics.

Turns out that Hannah is the ghost. Approximately two minutes after she figures this out, a realtor shows up at her house and explains in the most expository passage in Goosebumps history that Hannah's entire family died five years ago when their house caught fire. As if that wasn't bad enough, turns out the fire was started when Hannah didn't extinguish the campfire in the backyard. If you hadn't figured out already, this is by far the most depressing and guilt-inducing novel of the series.

Hannah sort of experiences weird black outs of time and when she wakes up she attempts to stop Danny from getting into perilous danger but she scares the hell out of him again and he takes off on his bike. Luckily in RL Stine World, ghosts can ride bikes so Hannah gets on her bike and rides to catch up with him. No I don't know if the bike died and that's why she could ride it, but thanks for asking.

Hannah catches up with the three as they break into the Postmaster's house and set it on fire while still inside. Alan and Fred manage to escape but they leave Danny in the burning house: it's up to Hannah to save him! But who should appear but the shadowy figure! Okay, bear with me, because I know this is confusing, but it makes exactly as much sense in this synopsis as it does in the book: Hannah pulls down the shadowy figure's hood to reveal Danny's face. The Shadow-Danny tells Hannah that Danny must die in the fire so that he, the Shadow Danny, can live and the real Danny can take his place in Shadow World. What.

Hannah escapes Shadow-Danny's grasp and rescues Actual-Danny, leaving Shadow-Danny to burn in the flames. In the ambulance Danny tells his mother that Hannah rescued him but she acts like he's crazy. After all, Hannah and her entire family died five years ago in a fire. Hannah realizes that in a case of celestial ineffeciency her entire family was put back on Earth in ghost form to make sure Danny didn't also die in a fire. What.

But the Twist is:
...there is no twist. The book ends with Hannah calling out to Danny as she goes to join her family in the afterlife.

the Platonic Boy-Girl Relationship:
Hannah Fairchild, the bored girl next door, and Danny Anderson, the mysterious boy next door whose hand disappears into Hannah's body half-way through the book.

Questionable Parenting:
When Hannah's younger brother throws a ball at the stovetop while her Mother is cooking breakfast, the mother threatens to cook and serve the ball. Now, I'm no gastrological science expert, but I'm pretty sure you shouldn't feed children balls.

Reinforcement of Negative Stereotypes Alert:
The city's Chief Postal Inspector threatens twelve-year old children repeatedly that he will go after them with his shotgun.

R.L. Stine Shows He is Down With the Kids:
Knocking over mailboxes, stealing ice cream cones from local parlours, these are some James Dean-level shenannigans.

Memorable Cliffhanger Chapter Ending:
Ch. 16/17:
Hannah goes up to her room to go to sleep when suddenly the shadowy figure is by her bed! Oh, by shadowy figure she means her jacket. What a spooky jacket, Hannah!

Great Prose Alert:
Hannah writes a letter to her friend at camp:
"Things are definitely WEIRD around here. Do you remember I told you about that boy who moved in next door? His name is Danny Anderson and he's kind of cute. He has red hair and freckles and SERIOUS brown eyes."
Also every third word in this book is an adverb. Seriously.

Conclusions:
This predated the Sixth Sense by a few years, so it's important to realize that RL Stine should have been nominated for an Oscar. That said, this novel was incredibly sad and elegaic. Outside of the Shadow-Danny stuff, which really just feels tacked-on to make the novel "spooky," it didn't really feel like a Goosebumps book at all. In fact, it is the only book in the series I've read thus far (with the possible exception of the Horrorlandone) that doesn't have a twist ending. The gravity given to the fact that the immensely likable narrator is the one responsible for the death of her family makes the book a heavier read than you'd expect.