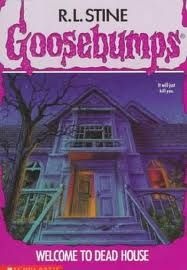 Front Tagline: It will just kill you.
Back Tagline: Look Alive!

Official Book Description:
Amanda and Josh think the old house they have just moved into is weird. Spooky. Possibly haunted. And the town of Dark Falls is pretty strange, too.
But their parents don't believe them. You'll get used to it, they say. Go out and make some new friends.
So Amanda and Josh do. But these new friends are not exactly what their parents had in mind. Because they want to be friends...
...forever.

Brief Synopsis:
Amanda and Josh Benson have been dragged by their parents to Dark Falls, a cheery-sounding town that has a lot of trees, causing a sort of permanent shade all over. Their dad has inherited a large house from his great-uncle who he didn't even know he had, and instead of questioning this development, he simply moves his whole family into the new house. The realtor, Compton Dawes, is a strange man who wears a cowboy hat and a full suit, even though it's the middle of summer. He takes the family to see their new house, but Josh has brought along their dog, Petey, because when you drive four hours to see a house, you of course take your dog with you? The dog freaks out at Dawes, and indeed the dog freaks out at everything in the town. While looking through their new house, Amanda thinks she sees a ghostly boy in her bedroom, but of course there couldn't really be a boy in her bedroom could there of course not how ridiculous.

Josh declines the offer to look at the house and instead pouts outside with Petey. When the family and Dawes comes out of the house, they find both Petey and Josh missing. Dawes drives them around until they see Josh running through the cemetery, chasing after Petey. Dawes drives them all back to his office where they make the final arrangements. The Bensons are officially moving to Dark Falls!

Moving Day for the Bensons gets off to an overcast, rainy start. As they wait around for the movers to show up at their Dark Falls house, Amanda thinks she sees another child roaming around the house and when she goes up to investigate. Upstairs a door opens and closes by itself, and this is the single scariest event in the book, and that's counting two pages later when we discover the door opened and closed because the window in the room was open. Amanda then freaks her brother out by pretending to be dead or something. And we're now at the half-way point in the book. Luckily, RL Stine would later learn valuable time-management skills.

The next few chapters cover some more breezy windows and more mysterious ghost appearances and noises coming from Amanda's room. Amanda eventually gets bored with the paranormal events and learns to ignore them. I think you learn in Intro to Creative Writing that when your characters themselves are bored, the odds of the reader caring are not very good.

One morning Josh is annoying his parents (Josh is a thoroughly unlikable character in this book) and they kick both kids out, telling them to go find some friends. Walking Petey on a leash, they find a young boy wearing long sleeve shirt and jeans despite the heat. He has a baseball cap in his backpocket and introduces himself as Ray. Ray offers to take the kids down to the schoolyard, where the three run into about a dozen kids of various ages. The kids form an ominous circle around Amanda and Josh until Dawes shows up for no reason to say hello. The kids break the circle up and play some softball. It's overcast outside, but once the sun starts to come out, all the kids seem to have sudden lunch appointments back at home.

At some point in all this, Petey runs away. Amanda and Josh's parents don't seem all that concerned, as they are the worst parents in the whole world. The night that Petey escapes, the parents are invited to a potluck dinner party in the neighborhood, and they leave the two kids home alone. Josh wakes up Amanda after midnight and tells her that he's figured out where Petey must be: the cemetery, as that's where he turned up last time he ran away. Josh's plan is to go to the cemetery after midnight in this strange town. I bet this all turns out well.

On the way to the cemetery, the two kids run into Ray, who is just I guess hanging around outside their house. Josh shines the beam of his flashlight at him but he then ducks behind a car and asks what they're doing. Ray tells them that they should avoid the cemetery but the two kids are insistent and the three walk to the cemetery. Once there, Ray shows them a large outdoor amphitheatre behind the cemetery, where they have town meetings and so forth. As he's showing them this, Petey appears behind a tombstone, but acts very weird and indifferent towards his owners. As Amanda chases after the dog, she sees a string of tombstones that read, in order, the names of all of her new friends in Dark Falls. It sure was good planning for the people who worked in the cemetery to arrange those markers in the order that she'd befriend those dead kids. She then of course sees Ray's tombstone, and he cops to being dead.

Ray explains that the town needs fresh blood, so every year they invite a family to their house, the Dead House, to be the town's next victim. He used to live in their house, everyone in town used to live in the house. Ray also explains that the town killed their dog, and that the Petey running around the cemetery is Goosebumps #32: the Barking Ghost. Then Josh accidentally shines his flashlight on Ray's head and all his skin melts off. What.

The two alive kids run back to their house to find their parents, but of course they're still at the potluck dinner. They panic, and then luckily all their dead friends show up inside the house and try to kill them, but not before making a truly excellent joke: "We used to live in your house. And now we're dead in your house!" Holy smokes.

Before the two kids can get murdered by dead people, a knock on the door scares off the entire group of kids. It's Mr. Dawes! He tells the kids that he was at the potluck dinner with their parents. The town formed a circle around the three and luckily they all escaped. He dropped the parents off at the amphitheatre for plot convenience and went to rescue the kids. The two kids get in the car with him because they are the stupidest kids who ever lived. He drives them to the cemetery and that's when Amanda sees his tombstone. He's one of them!

Dawes explains how the town used to be normal, you know, before all the murders, and how one day a yellow gas escaped from the plastics factory and turned them all into the living dead. Then Josh throws the flashlight into Dawes' face, with it embedding itself in his forehead. The two kids run to the cusp of the cemetery and spot their parents, tied to a stake in the middle of the stage, surrounded by the entire town sitting in the bleachers. Amanda comes up with the perfect plan: they'll uproot and topple over a tree that overlooks the amphitheatre, thus ending the shade and causing the sun to reveal itself. Because uprooting a giant tree is something two kids can do.

The tree falls over and the sunlight kills everyone in the town in gory detail. The best part is probably the young girl that Amanda had befriended thanking Amanda for killing her as her hair catches fire and her skin melts off. The two kids untie their parents and the family prepares to leave behind Dark Falls forever.

But the Twist is:
As they are about to leave, Amanda gets out of the car and takes one last look at their old house. As she's about to leave, a red station wagon pulls up, and a new family gets out. On the way back to the car, Amanda spots someone who looks an awful lot like Dawes letting them into the house.
SO THEY THEN JUST DRIVE AWAY, ESSENTIALLY CONDONING THE MURDER OF ANOTHER FAMILY.

the Platonic Boy-Girl Relationship:
Amanda and Josh Benson, a brother and sister whose friend Ray's face disappears halfway thru the novel.

Questionable Parenting:
Actual line spoken by the naive mother to her daughter: "Boys in your room. Curious blowing. You have to realize that you're nervous[.]"

Confusing Monsterology Alert:
It's not very clear just what the townspeople are in this book. They aren't really vampires, and they aren't really zombies, but one thing they definitely are is boring beyond belief.

Great Prose Alert:
"I snickered to myself."

Conclusions:
I started reading this series when it first came out. I remember how the first three volumes were released at the same time, and I bought all three and couldn't have been more excited about them. As a child I always considered Welcome to Dead House to be the darkest, "scariest" entry of the series. But reading it now it's surprising how dull and artificial the book is, even compared to later successes like the Haunted School orWerewolf Skin. The book is by far gorier than any of the subsequent titles in the series, not including the first couple of titles, and I suspect that's the aspect I responded so strongly towards when I was younger. Reading it now, it's hard to imagine that this is the book that spawned the best-selling children's series in publishing history.