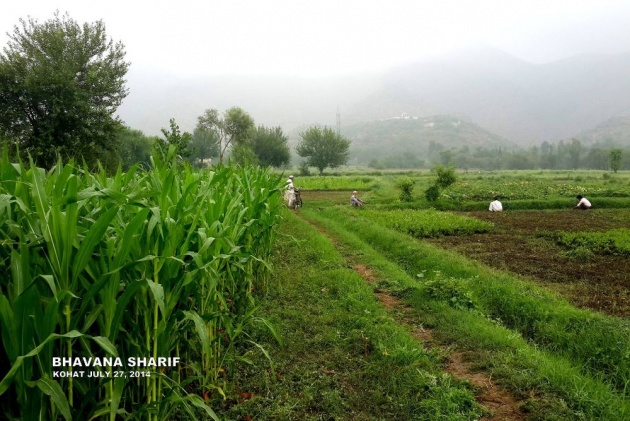 “Bhavana” is a Sanskrit word which literally means “cultivating or producing or development”. A farmer performs Bhavana when he or she prepares a soil and plants seeds. It is an important concept in Buddhism that signifies a spiritual cultivation also.

Natives of Kohat used to come for Bhavana (cultivation) to the village’s green fields in the northern mountains bed irrigated by the clean waters of two historical springs namely Chashma e Bar Nath and Shinki Dhand, which at present irrigate the lands of Pir Khels, Mansoor Khels and Jangle (mistakenly called Jangle Khel).
The Spring of Bar Nath is known by the name of Jogi Pir Bar Nath, one of the famous Jogis of Hinduism who was initiated on a stone near the Bhavana spring, and is also said to have created the spring. Hindus used to gather in his honor and also to celebrate the festival of Baisakhi near Bhavana in April.

After the sons of Ismail Khan Bangash occupied Kohat this part of the land with some other was conferred upon Pir Sayyed Umar Shah Bukhari Known as Pir Khel, in his honor for being Sayyed. He divided it into three parts, two parts among his two wives and one amongst his devotees. From his first wife, he had a only one son namely Sayyed Shah Mansoor who obtained one of the portions called Mansoor Khel, and from his second wife he had two sons and one daughter, namely Sayyed Shahi Mast, Sayyed Shah Hassan, and BiBi Aayeshah, she gifted her part to her brother Shah Hassan whom she loved more. The property and descendants of Sayyed Shahi Mast were called as Shahi Khel whereas Sayyed Shah Hassan had two wives, one belonged to Pir Khel family of his own and other to Afghan tribe Afridi. From Pir Khel wife born Mir Khalil the property and descendant of whom are called Khalil Khel and from Afiridi born Sayyed Noor the property and descendant of whom called Afrid Khel. The third portion of the land which was granted to his devotees called as Jangle due to geography and divided into five major parts which are as Kandai Yowa Khel, Kandai Bhangee Khel, Janga Khel, Kandai Dray Talay, and Kandai Allah Khel …. To be continued

I am Mr_Perfect and i like Modeling and acting. i like photography and working on photography being actor is my big wish

i feel alone my friends.

GOOD NIGHT MY ALL FRIEND .. HAVE A SWEET DREAMZZZZZZZZZZZZZ..........AND BE READY FOR NEW DAY JUST W…