Ice age is an animation film released in 2002 showcasing Ice age back to 20,000 years ago when many animals and humans were travelling towards south due to severe cold weather.When Roshan baby boy gets lost after the attack of some leopards.He then meets Manny and Sid.They then return baby to humans having many adventures on the way and making friend with Diego too a leopard.

Animals travelling to other destination due to cold Temperature 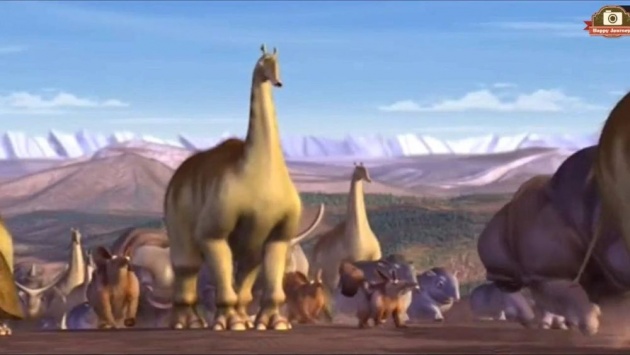 Scrat is a prehistoric squirrel though not much role is played by it but always causes some mishaps which unlikely turn out to be a disaster.Writer has used this animal in every series of the film at the beginning and at the end.

Manny an elephant whose species has been growing extinct and he thinks he is last of his kinds until he mets Peaches.

Crash and Eddie two twin brother opossums are brothers of Ellie they both cared for her and taught her how to hang tail by tree when sleeping.They are very adventurous but immensely stupid.Though they are fun loving and courageous.

Film starts showing the events happened to Earth 20,000 years ago with Scrat whose soul purpose is to store his prized acorn in his home.But fails to do so.When it burries in the ground leads a large crack which extends miles and miles and large avalanche sets off. 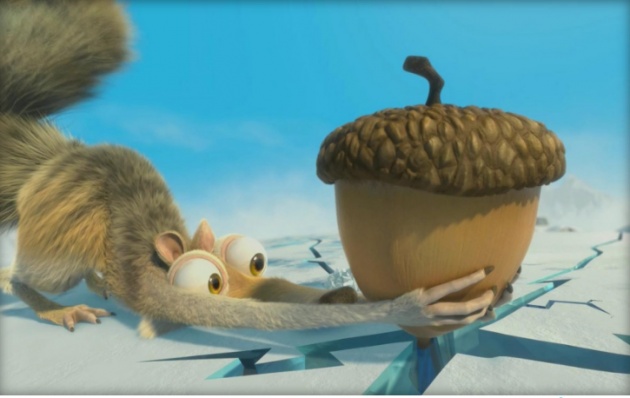 He barely escapes but finds itself in between prehistoric animals who are migrating towards south due to severe cold temperature and natural disasters.Sid a clumsy looking sloth is too going south lost by its group and family when it is attacked by two Brontops whom he angered them by stealing their meal.But is saved by Manny a large mammoth who fights them off.Manny is heading north trying not to follow other species with his own plan in mind.Sid too starts following him as he is afraid of Brontops and thinks they might attack him again. 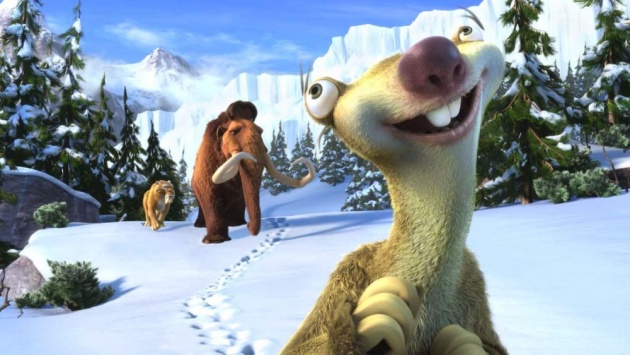 Meanwhile Diego along with his company Sito wants to take revenge on humans as their half pack is killed by humans.They plans to eat the chief's baby son Roshan alive.Soto leads them to raid the humans during which Roshan's mother get separated from the camp and jumps into the water when cornered by Diego.Diego again is sent by Soto to bring the baby back. Manny and Sids meets the mother and her son.Mother gives her baby to Manny as she has severe injuries due to water fall. 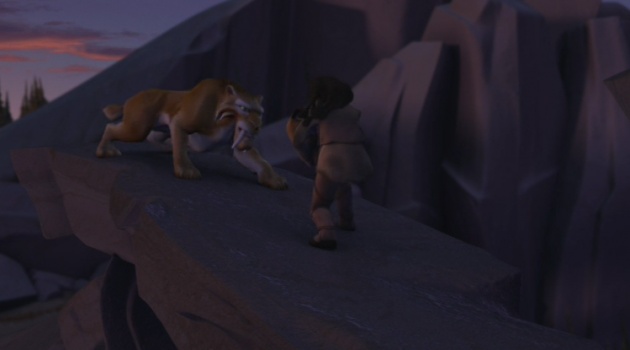 Manny has no intentions to carry  the baby but Sid persuades him to return the baby back to humans as he finds him very cute.After much persuation Manny agrees and they carries the baby back to humans.When they reach the humans settlements they find it deserted as humans along with their chief have gone to find the baby and their mother.

Nadia giving her baby to Manny 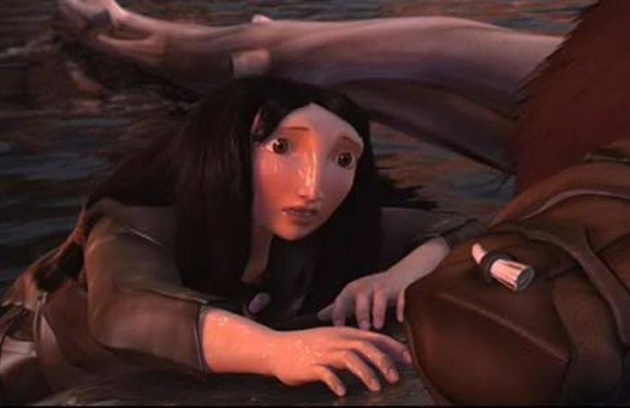 Their they found Diego who convinces them that he would help them to track the humans. Manny is firstly annoyed but when Diego saw him the foot prints Manny gets convince. The four travels on as Diego is secretly leading them to ambush for his pack. 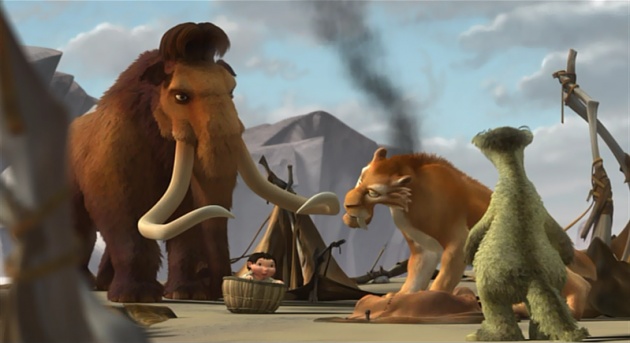 Togethor they have many adventures until they reaches a cave of paintings made by humans.Where Sid and Diego learns about Manny's past how his wife and children were killed by humans. 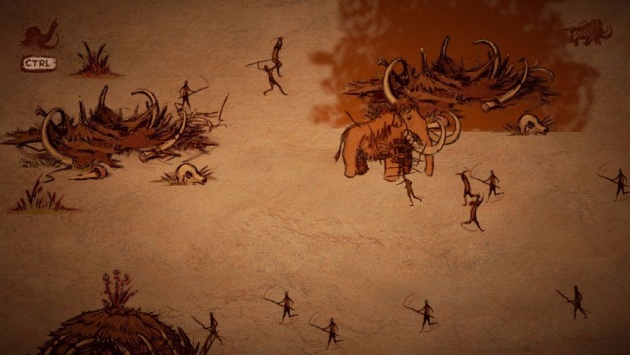 Later they almost reaches their destination when they are encounter with a river of Lava. Manny Sid and baby Roshan passes it across safely but Diego falls into the lava where he is saved by Manny by narrowly missing a certain death in order to save him. They then takes a break for the night when Roshan at that night takes first steps towards Diego who starts to change the minds.

Manny rushes toward Diego to save him from the Lava 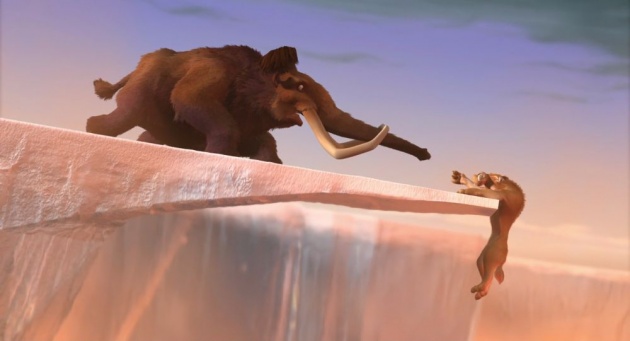 Next day they reaches the ambush.Where Sito and his friends are ready to kill Manny and take the baby away. While now Diego has full respect for Manny and has changed his mind completely,  he flees away in order to take their trust and.Sito and his companions corners Manny to kill him.When Diego attacks Soto to save Manny.Though Diego is severely injured by Sito.Manny then distracts the company by throwing one away.The rest of the pack retreats.Manny and Sid mourns over Diego as his injury may prove to be fatal.

Diego severely injured after the fight 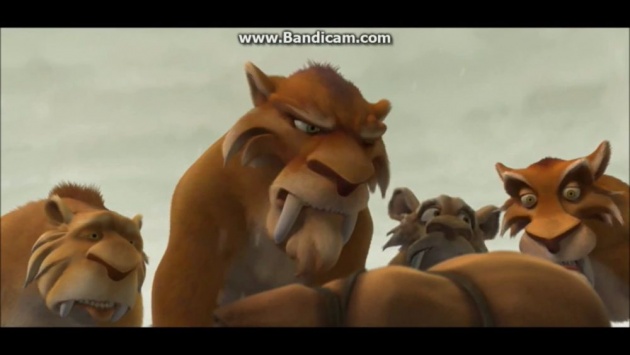 They continue to do journey without him in fearing that the herd might attack them again and they would not be able to save Roshan. They finally return the Baby to his tribe safely when they meet Diego safe and sound to their surprise.They then walk towards warmer climates.

Manny And Sid return the Baby to humans

20,000 years later Scrats frozen in ice ends up some  how in tropical lands trying to store the acorn.It then finds a coconut and tries to stamp in the ground only to mistakenly trigger volcanic eruption. 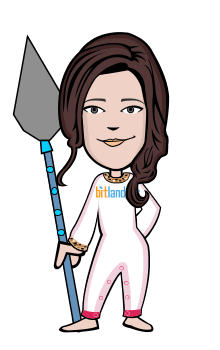