Imagined Conversation: THE PURGE: ANARCHY: for 12 hours, your insurance premium is not valid 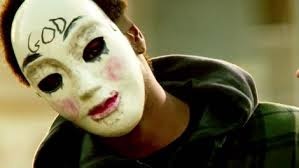 I was lucky enough to catch a sneaky peek at THE PURGE: ANARCHY at a screening in a swish (read: complimentary pencils) hotel in Central London. It’s the type of film that people enthuse about in block capitals, because living during ‘The Purge’ is like trying to survive in the Eastern Bloc. Set on 21 March 2023 – why 21 March, it’s the first day of Spring and the director’s partner’s birthday – it tells the story of a group of characters who are on the streets when they ought to be inside with their doors and windows boarded up hoping that marauding raiders in fright masks don’t turn up to do unspeakable things to them.

The premise of writer-director James De Monaco’s film is that in the future, all crime is made legal for a 12 hour period just as long as you don’t use ‘level four’ weapons (that’s grenades, nuclear weapons and really loud techno rock). This decision by ‘the Founding Fathers’, a Presidential substitute, who look like a rock band itching to get out of it, if you know what I’m saying (in other words, like Fleetwood Mac), has had the effect of reducing crime for the other 364 and a half days. But it got me to thinking: what would you do about insurance? People can do all sorts of stuff to your home with levels one to three weapons with no comeback and you’ve got to pay it off for, like, eternity. You have to wait a whole year to get your own back, if you aren’t made homeless and killed on the night of ‘The Purge’ itself.

So I imagined myself in Los Angeles (haven’t we all?) nine years from now, on the phone to an insurance company, trying to boost my cover at a reasonable rate so that I can receive compensation for any damage.

OPERATOR: I am in India, but carry on.

OPERATOR: Is your home on the border of a time zone, because that could be tricky?

LARRY: No, it’s in the Hollywood Hills. I bought it from Abbie Cornish’s character in SEVEN PSYCHOPATHS.

OPERATOR: Are you looking for a quotation?

LARRY: No, I’m not looking for a movie quote. I want to know what my premium would be.

OPERATOR: Of course. What is the value of the property?

LARRY: Of course not.

OPERATOR: I have a cousin in Canada.

OPERATOR: I think his whole body is there.

OPERATOR: How many bedrooms does it have?

OPERATOR: Oh good, can I ask my cousin if he can stay? You can be his sponsor.

LARRY: I have no experience of Alcoholics Anonymous.

OPERATOR: How old is the property?

LARRY: I dunno. It’s one of these nice single level places. You can manoeuvre a dolly cam in there.

OPERATOR: That means it was built in the 1980s, when they introduced dolly shots.

LARRY: That’s not logical. Let’s get back to the matter in hand. Can I get insurance for the period in question?

OPERATOR: That depends. What kind of locks does it have?

OPERATOR: If you are going to do an insurance parody, you’ve got to know your locks. Does it have bars on the windows?

OPERATOR: Do you drink at them? Sorry, couldn’t resist.

LARRY: No, I’m not in the habit of drinking whilst standing by the window, except during one of the scenes when all hope is gone and I look wistfully into the middle distance.

OPERATOR: OK, your property has the minimum amount of locks. Are you planning to leave it unoccupied?

LARRY: Of course, I’m going to fly out of the country during ‘The Purge’ like any sensible person.

OPERATOR: That’s no good. You should remain in the property.

LARRY: Look, I’m no good with weapons. Someone asked me for a cork screw and I did a twisted diving manoeuvre.

OPERATOR: Well, I’m sure you can get insurance if you make a reasonable effort to secure the property.

LARRY: I could put all my personal effects in storage.

LARRY: Can you provide cover?

OPERATOR: Do you know what the time is?

LARRY: A quarter to five.

LARRY: What’s that supposed to mean?

There is a knock at the door. LARRY opens it. LEO (Frank Grillo) appears.

LARRY: I don’t have one. I’m one of these mad Los Angelinos who take the bus and try to solve the maths problems on Transit TV.

LEO: I need ammo. Do you have any kind of weapon?

LARRY: I once cut my tongue on a potato chip.

There is another knock on the door. LARRY opens it. SHANE (Zach Gilford) and Liz (Kiele Sanchez) appear.

LARRY: So why are you still together on the night of ‘The Purge’?

LIZ: We haven’t decided who gets the car.

SHANE: It doesn’t matter. It’s broken down. There are creepy people in masks following us.

LARRY: I’m afraid I’m not a mechanic, though I can make the sound of an Autobot (cue poor impression).

There is another knock on the door. EVA (Carmen Ejogo) and CALI (Zoë Soul) appear.

LARRY: Why are doors in movies and TV shows always open?

EVA: Our super made a move on us. He would have done nasty things until he got shot in the head.

LARRY: But it’s not the time of ‘The Purge’ yet.

CALI: It is on the East Coast.

LARRY: Really, because I thought they were behind.

SHANE: This stuff is messed up.

LARRY: So what are you all going to do?

CALI: We’re going to trick Leo into giving us protection.

LARRY thinks long and hard before deciding against saying something obvious.

EVA: But then a true friend is going to decide she doesn’t want to be cheated on.

SHANE: There’s a trap in the street. Someone’s leg gets pulled.

CALI: Then we get sold off as sacrificial victims to be hunted down like in THE RUNNING MAN.

LEO: Someone is making the point that during ‘The Purge’ poor people get killed.

SHANE: Leo's on a mission to confront the man who killed my son.

LARRY: So what happens?

LIZ: Shane doesn’t do spoilers. That’s why we’re breaking up.

LARRY: It sounds like a lot of well-paced B movie action.

LEO: You could say that.

LARRY: If they are not going to get prosecuted, why do the perpetrators wear masks?

CALI: So no one can get them next time.

LARRY: And Leo, why in 2023, do you have a newspaper cutting on your wall? I thought print was dead.

LEO: The future is always a sorry-ass version of the present day.

EVA: This has morphed into a random film review with no inner logic.

There is a knock at the door.

DAD: Can I use your bathroom. All this talk of ‘The Purge’ sets my bowels alive!

THE PURGE: ANARCHY opens in the US on July 18 and the UK on July 25, 2014. It cost $9 million to make. Producer Jason Blum is so rich, Roger Corman comes to him for advice. But Mr Blum passed on THE BLAIR WITCH PROJECT. That and other fun facts were learned on Wednesday 25 June at the Soho Hotel, London. With thanks to Empire magazine, Show Film First and Universal Pictures