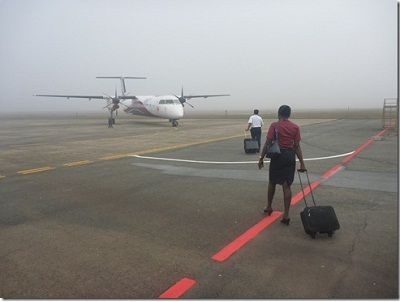 There was a pilot flying a small single engine charter plane, with a couple of very important executives on board. He was coming into the Seattle airport through thick fog with less than 10 miles of visibility when the power went out. So, he began circling around looking for a landmark. After an hour or so, he starts running pretty low on fuel and the passengers were getting very nervous.

Finally, a small opening in the fog appears and he saw a tall building with one guy working alone on the fifth floor. The pilot turned the plane around, rolled down the window and shouted to the guy, "Hey where am I?"

To this, the solitary office worker replied, "You're in a plane."

The pilot rolled up the window, executed a 275 degree turn and proceeded to execute a perfect blind landing on the runway of the airport 5 miles away. Just as the plane stops, so does the engine as the fuel had run out.

The passengers were amazed and one asked how he did it.

"Simple," replied the pilot, "I asked the guy in that building a simple question. The answer he gave me was 100 percent correct but also absolutely useless, therefore, that must be Microsoft's support office and from there the airport is just five miles due East."