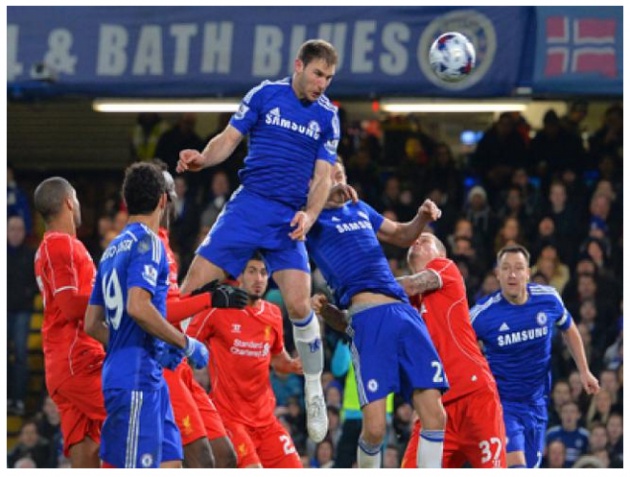 The Serbian's goal gave Jose Mourinho's side a 2-1 aggregate win, taking them into a March 1 final against either Tottenham Hotspur or Sheffield United and cutting off one of Liverpool captain Steven Gerrard's paths to a golden send-off before his departure for the Los Angeles Galaxy.

The 34-year-old now has only the FA Cup and Europa League to aim for, while Chelsea remain on course for three trophies after bouncing back from their humiliating 4-2 loss to third-tier Bradford City in the FA Cup.

"This is a new Liverpool team and a very difficult opponent, so I'm even happier because we beat a very good team over two legs," Mourinho said.

The gruelling encounter at an electrified Stamford Bridge will have taken its toll on Mourinho's squad, however, ahead of Saturday's crucial home game against title rivals Manchester City in the Premier League, with Cesc Fabregas notably forced off by injury.

Chelsea striker Diego Costa is also at risk of respective punishment after twice appearing to stamp on Liverpool players -- Emre Can in the first half and Martin Skrtel, with whom he fought a running battle, in the second.

Asked about the threat of a ban, Mourinho replied: "Let Costa play his football."

Liverpool manager Brendan Rodgers told Sky Sports: "I thought they were outstanding. Over the course of two legs, we were the better team.

"We had good opportunities to score, but didn't score. I feel nothing but pride, really, because the players gave everything."

Last week's first leg had also been a spiky affair and a number of contentious incidents made referee Michael Oliver the centre of attention during a break-neck first half in west London.

Chelsea had two penalty appeals turned down, firstly when a shot from Willian struck Lucas Leiva on the hand and then when Skrtel appeared to catch Costa with his foot as the burly Spain striker looked to wriggle down the byline.

The second appeal was particularly compelling, but Liverpool felt that Costa should have already been sent off by then after he trod on Can's ankle right in front of the two dug-outs.

Mourinho made nine changes to the team humbled by Bradford, but Kurt Zouma kept his place ahead of Gary Cahill at centre-back and the 20-year-old Frenchman made an uncertain start.

He had to sprint back to dispossess Raheem Sterling after misjudging a header on halfway and when Philippe Coutinho took him out of the game with a body-swerve, Thibaut Courtois was obliged to block with his feet.

Courtois also jutted out a hand to parry a shot from Alberto Moreno, who had been released by a glorious pass from Gerrard, but Chelsea finished the half strongly, with Oscar twice shooting wide.

Both teams lost players to injury early in the second period, with Fabregas hobbling off after being caught by his own captain John Terry before Mamadou Sakho ceded his place to Glen Johnson.

Round Two of the Costa-Skrtel clash, meanwhile, saw the Slovakian defender left in a heap after the Chelsea striker landed on his foot.

Moments later, Mourinho reacted furiously when Jordan Henderson, who was on a booking, handled the ball but avoided a second caution.

With Mario Balotelli on as a substitute, Liverpool went into extra time knowing they had to score due to Chelsea's away goal, but it was the hosts who struck, with Ivanovic heading in Willian's right-wing free-kick in the 94th minute.

Henderson headed Liverpool's best chance of an equaliser wide, while Gerrard's night ended amid frustration as he was booked following a tangle with the irrepressible Costa.