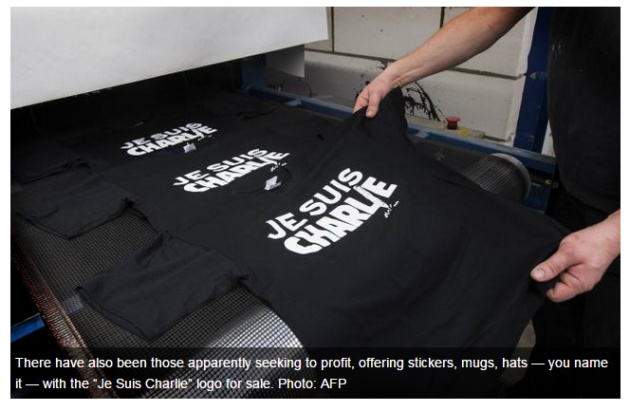 Products with the “Je Suis Charlie” logo, from t-shirts to kitchen aprons, are being sold widely online, presenting a moral quandary for ecommerce stores after this week’s deadly attacks in Paris.

In the wake of the hostage crisis and massacre, “Je Suis Charlie” (I Am Charlie) has become a rallying cry, chanted in solidarity with the victims and tweeted millions of times as a hashtag.

But there have also been those apparently seeking to profit, offering stickers, mugs, hats — you name it — with the “Je Suis Charlie” logo for sale.

Some have promised not to take advantage and donate their share of commissions, including to Charlie Hebdo, the Paris satirical newspaper attacked by Islamist gunmen on Wednesday.

Amazon’s French site, Amazon.fr, has pledged to do just that, with “Je Suis Charlie” stickers among its top sellers in their category. Some such stickers are listed for as much as 14.99 euros ($18).

A black kitchen apron with “Je Suis Charlie” written in white was on sale for 25.50 euros — one size fits all, made of 65 percent polyester and 35 percent cotton.

“Amazon.fr will transfer commissions that would be received on the sale of products proposed on its marketplace by third-party merchants using ‘Je Suis Charlie’ to Charlie Hebdo magazine,” the company said.

It also pledged to pull from its site products that violate its rules.

eBay, where copies of issues of the weekly were drawing bids of more than 70,000 euros within hours after Wednesday’s attack on the paper, has promised to do the same.

Other products being sold on eBay included “Je Suis Charlie” badges, mugs and keychains at the price of a few euros or more.

A number of sites pulled products from their online stores after criticism from Internet users.

“Shame on you for taking the Charlie Hebdo pain and drama and selling ‘Je Suis Charlie’ products!” one person posted on the Facebook page of Spreadshirt, an online platform for t-shirt sales.

The company said it did not intend to profit from the crisis.

“We have checked one-by-one each of our partners’ e-stores and each of the designs ... to assure ourselves that no commission is taken on the sale of ‘Je Suis Charlie’ products,” the company wrote on its blog.

“Spreadshirt is not accepting any commission.”

A number of individual sellers on such sites have also said they were not aiming to profit despite the prices involved.

On eBay, a seller identified as B.b.r argued that a t-shirt with a bloodied map of France and the “Je Suis Charlie” logo for 13.60 euros was selling at cost.

The creator of the site onatuecharlie.com (Charlie was killed), which sells two t-shirts with the logo, said he plans to transfer 50 percent of the profits to the French Association for Victims of Terrorism.

“Charlie Hebdo remains a company,” said the creator, who would only be identified as Vincent.

“They need support, but not necessarily financial. I prefer to send the money to an association.”

He said that he opened the site to allow those who wanted a shirt to support Charlie Hebdo to be able to find one and that he had sold about 20 over two days.

The Redbubble.com site said it would donate profits from such products to press freedom group Reporters Without Borders.

The version of the logo that has spread most widely features the three words in white and grey against a black background, using the same recognisable font as the paper does in its title.

It had been posted by Joachim Roncin, an artistic director and music journalist at Stylist magazine, within minutes after news spread of the attack on Charlie Hebdo that left 12 people dead, including celebrated cartoonists and its chief editor.

He tweeted that “the message and the image are free for any use” but that he would not like to see people profit from it.