NEW YORK, NY, January 13, 2013 – Film Annex is proud to be sponsoring The New York Open Team Judo Championship, a showdown of Brazil, Canada, France, Germany, Russia and USA, on Sunday, March 3, 2013, in NYC at the New York Athletic Club, 180 Central Park South, New York, New York.  The teams in the Judo tournament include some of the strongest players in the world, featuring World Champions and London 2012 Olympians. The tournament is sponsored by Film Annex, United Water and the New York Athletic Club. 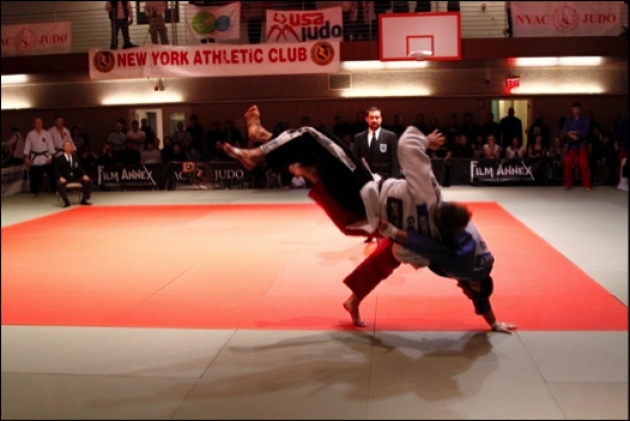 Each team consists of five athletes in the following weight divisions: 66 kg, 73 kg, 81 kg, 90 kg and over 90 kg.  Total prize money of $10,000 and a coveted champion's plaque is at stake: the winning team will receive $7,000 and the champion’s plaque to proudly bring back to their native country. Second place team will win $3,000.

Germany, the New York Open Team Champion for 2011 and 2012, is returning to defend its hard fought title. Team USA will be fighting to take revenge over their narrow loss in the final against Germany. Team France, the 2012 New York Open Bronze medal winner, is competing for the second time in the team event. Team Canada is always a tough challenger, and Team Brazil and Team Russia are power-packed and strong contenders in the quest for the championship plaque. The five-man team competition will utilize a round robin format.

Team Judo is the most exciting Judo competition in the world to watch, and cheering for your favorite country is encouraged. Fans wave country flags and root for players, rocking the room with energy and good-natured rivalry, and at this event a live commentator calling the action on the mat and a DJ all add to the spirited atmosphere.

The judo tournament will be held at the New York Athletic Club, located at 180 Central Park South on the 6th floor.  All spectators are welcome, and tickets can be purchased for $25 at the door for general seating, $85 for VIP seating. The tournament action will begin at 10 am, semi-finals at 2 pm and the finals after 4 pm. 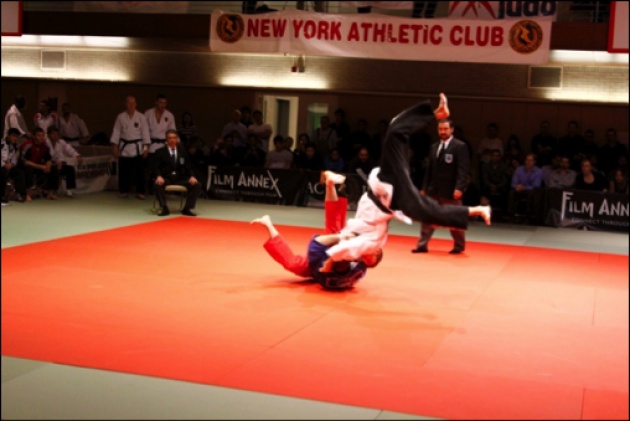 Judo debuted as an official Olympic sport in 1964 and is practiced by millions of people throughout the world today. Kayla Harrison won the first gold medal in judo for the United States at the 2012 Olympic Games. The discipline of Judo is a Japanese martial art and combat sport that originated in Japan in the late nineteenth century. Best known for stunning throws, Judo also involves much grappling on the ground like wrestling, but adds submission chokes and arm locks to the mix.

Judo, translated as "gentle way," teaches balance, leverage and flexibility in performing throws and other skills, and helps to develop complete body control and fast reflexive action. Skill, technique and timing, rather than brute strength, are the essential ingredients for success in this sport. Worldwide, over 20 million people practice judo, with all age groups, both sexes and disabled persons all able to participate in learning and practicing in the sport.

After a ceremonial bow, each judo match begins with each opponent grabbing each other by collars and sleeve of the judo uniform, the judogi. The object of the match is to score an "ippon," which wins the match – this is akin to a knockout in boxing or a pin in wrestling. Scoring an ippon can occur from a) throwing the opponent to the ground so he lands on his shoulder or back; b) pinning him to the ground on his back for a length of time; or c) forcing him to submit to a choke or armlock. Any of these score ippon and wins the match. Although an ippon is the objective, there are also partial points scored during the match. Points can be awarded when a variety of throws or blocks are successfully accomplished. At the end of the match, the highest quality score wins.

Founded in 1868, the New York Athletic Club boasts a unique history.  The NYAC organized the first US championships in boxing, wrestling and outdoor track and field and has supported amateur athletics since its founding. From a silver medal won by a NYAC member in the first modern Olympics (1896) to Kayla Harrison's gold medal in London, NYAC members have won over 250 Olympic medals.

United water is a division of Suez Environment.  The company focuses on protecting our environment and serving the community, Today and tomorrow. We know the two go hand in hand. That’s why everything we do is focused on what you need today while we plan and prepare for what the world might need tomorrow. Clean water. A healthy Earth. For your small corner of the world and for the global community. Every day we’re your vital resource, providing stewardship of our most vital natural resources. For more information, visit www.unitedwater.com.