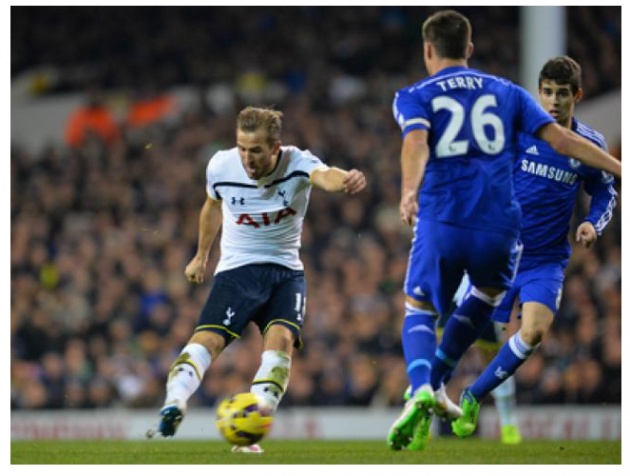 Chelsea manager Jose Mourinho suffered a chastening defeat as Tottenham Hotspur stunned his side 5-3 on Thursday to leave them joint-top with Manchester City in the Premier League.

This was also the first time the shell-shocked west Londoners had conceded five goals under Mourinho.

Few would have predicted this result, especially when Diego Costa opened the scoring. But Harry Kane equalised before a three-goal blitz swung the game in Tottenham's favour.

Danny Rose, Andros Townsend's penalty and Kane, again, all scored in a seven-minute spell either side of half-time.

Eden Hazard hit back, but Nacer Chadli killed off the visitors' hopes by scoring for a rampant Tottenham late on. John Terry rounded off the scoring, but it was scant consolation for Chelsea.

Chelsea have shown signs in recent weeks that they are not the unstoppable force they had appeared to be over the season's opening months.

Defeat at Newcastle United was followed by dropped points at Sunderland and Southampton on their travels.

And they faced arguably their toughest test in some time on the road against a Tottenham side who are slowly coming to terms with life under Mauricio Pochettino.

Pochettino, who has assembled a youthful side, began this game on top and Chelsea goalkeeper Thibaut Courtois had to keep out Chadli's 17th-minute effort from close range.

Just like the recent reverse fixture between these two sides in early December, which Chelsea won 3-0, Mourinho's side instantly went up to the other end and took the lead via Costa.

Hazard's mazy run ended with a shot against the post and Oscar returned the rebound into the six-yard box for Costa to stroke home his 15th goal of the season.

Chelsea all at sea

But Tottenham have their very own goalscoring threat in Kane and the 21-year-old striker enhanced his growing reputation with a goal of his own on the half-hour mark.

It came out of the blue as Kane, who had barely had a kick up to that point, showed his predatory instincts by shrugging off Oscar and driving home from 20 yards out.

Mourinho was visibly fuming at seeing Kane drift past some feeble challenges, and given that it was his 15th goal of the season, it was not like Chelsea had not been warned.

Chelsea looked in control before their lapse and they were hit with a sucker-punch just moments before the break.

Chadli saw his shot cannon off the post and left-back Rose was the unlikely source lurking to net the rebound.

It got even worse for Chelsea before the half was out. Kane was sent sprawling in the box by Gary Cahill and Townsend made no mistake from the penalty spot.

Chelsea needed a response and Hazard just drove over to sound a warning.

But any hopes of a comeback were extinguished by Kane. The England Under-21 striker collected Chadli's pass, turned Terry and curled home a fine 52nd-minute strike.

The three-goal purple patch left White Hart Lane in raptures and Chelsea were all at sea, but they were presented with a 61st-minute lifeline.

Federico Fazio was caught in possession and Hazard and Cesc Fabregas swapped passes before the Belgian fired home to restore hope for the visitors.

But Chelsea were vulnerable as they pushed forward and Chadli's 78th-minute strike ended the visitors' resistance for good, despite Terry's late effort.