Cars have been around for many years. In fact, one of the first widely known cars was the Benz Patent Motor Car. Released in 1885 and built for one year, it was crude by our standards, but revolutionary for its time. Many notable vehicles came afterwards. One such vehicle was the Ford Model T. The Model T by Ford was one of the first cars to be massed-produced and more affordable with a starting price of $860. That price eventually came down to $260 however. One of the Model T’s biggest breakthroughs however wasn’t something that was actually under the hood. It was regarding the assembly process. Henry Ford, founder of the Ford Motor Company, came up with the assembly line process for building automobiles, and that significantly aided in production. Assembly time was shortened and costs were significantly reduced. Now let’s fast forward a few years and head over to Europe.

The year was 1933 and Adolf Hitler was currently in control of Germany. He wanted someone to develop a car that would suit the needs of the people. He wanted a “People’s Car”. It was during this time that he discovered a small car being developed by Dr. Ferdinand Porsche. Hitler got in contact with Dr. Porsche and they worked out a deal that would eventually lead to a car that would be built without much change for over 60 years all over the world. As strict as Hitler was, Dr. Porsche had high expectations for the new vehicle. The engine had to be of an air-cooled design that had around 25 horsepower. The vehicle itself had to be light, which would help with the fuel economy requirement of 100 kilometers for every 7 liters of fuel. On the performance side of things, the Beetle had to reach a top speed of 100 kilometers per hour. Being able to reach that top speed wasn’t good enough though. The car had to be able to HOLD that speed as well. The price of the car wasn’t to exceed 900 marks. By the way, marks, or rather German Marks was a form of currency used out there at the time. The car was called the Volkswagen Beetle.

As time went on the Beetle reached the end of the development stages and began its life all over the world. It had a rocky start but eventually things changed for the better. Technology was getting more advanced. Cars were getting bigger, more powerful. At the turn of the century, only a handful of people had cars. The cars were crude by today’s standards but for the time, they did what they needed to do. Now, by the 1950’s the times had changed. People wanted cars that were flashy and extravagant. Companies like Ford, Chevy, Dodge, and others we`re coming out with new models. They mostly had similar features. The bodies were heavy, long and usually had lots of chrome, which you would seeon the trim pieces and bumpers. People called it "jet-age" styling. Generally under the hood, you would find a large V8 engine.

They had a lot of power but there was a price. It was low fuel economy. As fuel was cheap in those days, that wasn’t a problem…. yet. By the 1970’s, times had changed once again. Around that time, we had shifted to overseas production of oil. International conflicts led to issues regarding the importing of oil for gasoline production. The result of this was a serious gas shortage, not unlike what is happening in the state of Texas as of the time of this writing. The issues in present time however are unrelated. The reason behind our gas shortage today is due to damage to local oil refineries from the Hurricane Harvey event, and the overall panic of people overbuying gasoline. As a result of times like these, familiar faces like the Volkswagen Beetle began to make a comeback. Small four-cylinder cars were now getting a chance to shine in the spotlight. The first part of this entry focused on the specific cars that have left their mark in history. It was important to focus on other specific models to see how much of an impact a specific vehicle can have. The first car we looked at was the Benz Patent Motor Car. This car was important because it was the first widely known car model to be produced even though it was only for a short time. After that came the Ford Model T, a vehicle that ended up being in production for several years. The assembly line manufacturing process had been perfected with the development of this model. Also, this was the first car that was meant to be affordable by the general public. Fast-forward several years and then came a car that was designed to not only be affordable but also fuel-efficient with reasonable performance. That car was the Volkswagen Beetle. As time went on, cars grew in both size and performance, but suffered in fuel-efficiency and handling. Eventually the United States encountered an oil crisis and as a result, residents had to deal with gas shortages. Eventually a new kind of car rose to fame, front-wheel drive, four-cylinder cars.

Ford had begun to develop a small, efficient four-cylinder car. They called it the Fiesta. Now this car was great, but even though it was a sales hit in Europe, it failed in North America. As a result, Ford wanted to develop a new small car, this time using Mazda’s expertise in small cars. The result was the Ford Festiva, which was really a renamed Mazda 121. Released in 1986, Ford conducted trial runs of the new car in Japan.

It was available with unusual options for the time, like a power soft-top, electronic suspension, and a sliding rear seat. The car ended up being a success in Japan so Ford decided to take the design to Kia in order to make use of the cheap labor in South Korea. Kia began to build the car as both the Ford Festiva and Kia Pride. The Pride came in different body-styles, which were the regular two-door hatchback, four-door hatchback, and sedan. The Festiva/Pride was such a sales hit out in Korea that it ended up being produced for many years. If that wasn’t enough, the car even caught the attention of Saipa, an Iranian car manufacturing company. To this day, they are still producing the Pride, or rather a “descendant” of it.

As a personal owner of a Festiva, I can personally vouch for the dependability of the vehicle. It was built with extraordinarily high quality and has lasted for close to 30 years, and that is with no special treatment, like being garaged kept or anything like that. The car feels complete, and it completely defies its age. It isn't a car that makes you feel like, "Man, I seriously need a new car. This thing has almost had it". Yes, the car looks old, but when compared to other cars produced in the late 1980's, it looks modern. When you step in the car, it's easy to forget how old is. Turn the key and start it, and the engine comes to life. Don't expect it to win any races, but when you put the 5-speed manual transmission in gear, give it a little gas, release the clutch (smoothly of course), and watch out. You will certainly gather someone's attention, like an old German car. 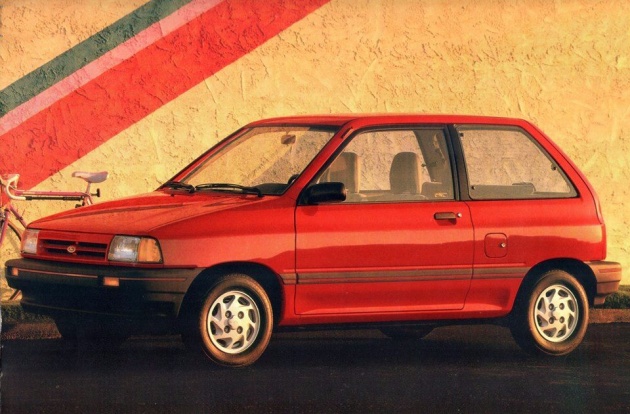 Photo is from Google

Even though the car may not be a top-performer in the speed area, it certainly wins in the fuel economy department. A recent long-range test of the car yielded an average of 35 mpg, and that's running at 75 mph (keep in mind the top speed is 85 mph, and the car's criusing speed is 55 mph), and the air conditioning is also active. Need to carry stuff? The backseat will fold down and forward essentially turning the car into a van. Maybe it's not stuff that you need to carry, but rather people. 4 average-sized people can comfortably fit in the car. People may make jokes about the car, but in recent times, like the current gas shortage due to the aftermath of the Hurricane Harvey event, those voices have become silent now. In North America, the Festiva didn’t change much, other than some body color variations and some minor cosmetic and technical upgrades under the hood. It is truly a testament to quality engineering.