Making Of 'The Scarf' 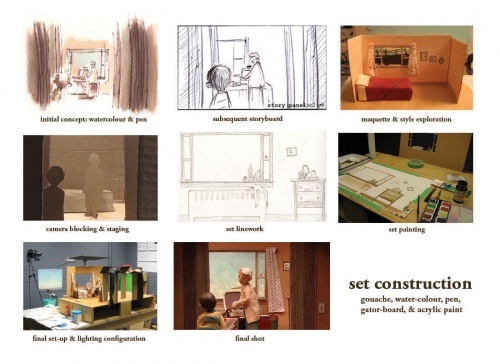 I'm an independent animator and film-maker, and I made my first film, The Scarf, while in my final year at Sheridan. The film took approximately a year to create, starting with story ideas and boarding those out, planning shots, fabricating puppets, props, and sets.

The story first took shape in the spring semester of my previous year, and was narrowed down over the summer before production began in September. Storyboards were laid down throughout the early portion of the autumn, alongside the fabrication of the puppets. These were constructed primarily using super-sculpey, armature wire, brass stock, and plumber's epoxy. Once the story was finalized and timed out into a leica reel, I began set and prop construction, finishing up at the end of December. When January rolled around I began animating a total of 45 scenes, completed by the end of March and followed up with post-production, including colour correction, rig removal, music, editing, and sound. The final film was finished in mid-April of 2010.

Since that time I have been involved in a subsequent number of small-scale stop-motion productions and freelance work, The Scarf has been featured in 20 film festivals to date including Annecy, and as of this past week a new short film was completed.

I'm an independent animator and film-maker with a passion for story-telling, bicycling, sewing, and board games! I also like good analogies and bad puns.