Three children are recovering in hospital in Austria after being rescued from a minivan containing 26 migrants.

Police said the severely dehydrated children would not have lasted much longer in the cramped vehicle.

The minivan was stopped in Braunau district on Friday and the Romanian driver was arrested after a chase.

Separately, four men appeared in court in Hungary following the discovery last week of another truck in Austria containing the bodies of 71 people.

The three Bulgarians and an Afghan, who were arrested in Hungary, were remanded in custody until 29 September. Austria is expected to seek their extradition.

The latest incident - which was not reported until Saturday - happened near the small town of St Peter am Hart, close to the German border. 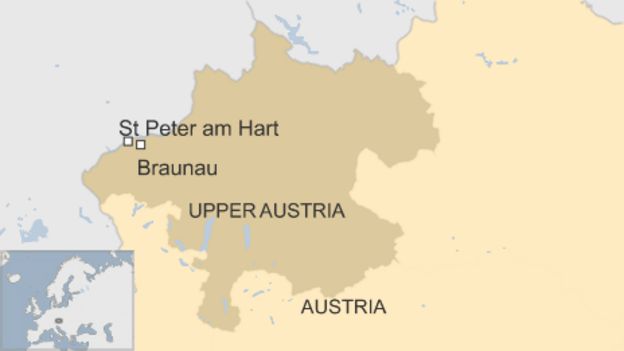 What we know about Austria lorry find

A police spokesman told the BBC that the children were crammed in the back of the minivan along with the other migrants, said to be from Syria, Afghanistan and Bangladesh.

He said the children - aged about five or six - were critically ill and almost unconscious. Officials said on Saturday that their lives were no longer in danger but they are still in hospital.

Police said they had tried to stop the vehicle and gave chase when it drove off at speed. The migrants said they were hoping to reach Germany.

The discovery of the 71 bodies in the lorry left on a roadside near the Hungarian border last week led to an outcry.

Austrian police were alerted when a road worker saw liquid seeping from the vehicle and the badly decomposing bodies were found inside.

Prosecutors say the four suspects who appeared at court in the city of Kecskemet on Saturday are believed to be low-ranking members of a Bulgarian-Hungarian people-trafficking gang.

So far this month more than 40,000 asylum seekers, the majority of them Syrian, have arrived in Hungary via the Balkans.

Hungary said on Saturday it had completed a 175km (108 mile) razor-wire barrier - aimed at stemming the flow of migrants - along its border with non-EU member Serbia.

It plans to replace the barrier with a 4m-high (13ft) fence.

Many migrants fall prey to smugglers who wait near the refugee camps, offering to take them at a high price on to western Europe, the BBC's Nick Thorpe in Hungary says.