Missing jet ‘at bottom of sea 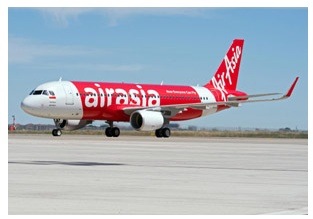 International search planes and ships scouring Indonesian waters for a missing AirAsia plane focused yesterday on a patch of oil for possible clues, as a top official warned the aircraft was likely at the bottom of the sea, reports AFP from Jakarta.

Australia, Singapore and Malaysia joined the Indonesia-led search as anguished relatives waited for news of their loved ones more than a day after Flight QZ8501 disappeared over the Java Sea with 162 people on board.
The Airbus A320-200 lost contact en route from Surabaya in Indonesia’s east Java to Singapore on Sunday after the crew requested a change of flight plan due to stormy weather, in the third crisis for a Malaysian carrier this year.
Indonesian Air Force spokesman Hadi Tjahjanto told AFP the search was now concentrated on an oil patch spotted off Belitung island in the Java Sea, across from Kalimantan on Borneo island.
“We are making sure whether it was avtur (aviation fuel) from the AirAsia plane or from a vessel because that location is a shipping line,” he said.
Separately, Indonesian Vice President Jusuf Kalla said an object spotted at sea was not from the plane.
“It is not an easy operation in the sea, especially in bad weather like this,” he said, adding that 15 ships and 30 aircraft were searching the area.
“The government will not give up and is not giving a time limit for the search. What is important is to find the victims and the plane.”
The National Search and Rescue Agency (Basarnas) chief Bambang Soelistyo said earlier it was likely the plane was at the “bottom of the sea”.
The hypothesis is “based on the coordinates given to us and evaluation that the estimated crash position is in the sea”, Bambang Soelistyo told journalists.
Ships and aircraft were searching an area where the sea is 40-50 metres (130-160 feet) deep, he said, adding that Indonesia was coordinating with other countries to borrow any equipment needed to scour the seabed.
Distraught relatives spent the night in Surabaya hoping for news of loved ones as the international search effort expanded.
Intan, 28, said Indonesia needed overseas help to find the plane which was carrying her brother and his family and friends.
“My hope is Indonesia seeks as much help as possible from other countries. Don’t claim ‘We have sophisticated technology’, just ask other countries because they are better equipped,” she told AFP, as Jakarta welcomed offers of help from its neighbours.
“My prayer is I really, really hope that there will be news about the people on board. Whatever it is, what is important is we know where they are now,” she said.
While the international operation has drawn comparisons with the ongoing search for Malaysia Airlines MH370, Australian Prime Minister Tony Abbot said it did not appear to be a great mystery.
“It doesn’t appear that there’s any particular mystery here,” Abbott told Sydney radio station 2GB.
“It’s an aircraft that was flying a regular route on a regular schedule, it struck what appears to have been horrific weather, and it’s down. But this is not a mystery like the MH370 disappearance and it’s not an atrocity like the MH17 shooting down.”
China, which had 152 citizens on MH370, has also offered to help with the search.
One Indonesian family of 10 had a miraculous escape when they arrived too late to catch Flight QZ8501.
“Maybe it is all God’s plan that my family and I were not on the flight. It was a blessing in disguise,” said Christianawati, 36.
AirAsia said 155 of those on board were Indonesian, with three South Koreans and one person each from Singapore, Malaysia, Britain and France. The Frenchman was the co-pilot.
Air traffic controllers lost contact with the twin-engine aircraft around an hour after it left Surabaya’s Juanda international airport at about 5:35 am (2235 GMT Saturday).
Shortly before the plane disappeared, the pilot asked to ascend by 6,000 feet to 38,000 feet to avoid heavy clouds but his request was turned down due to another flight above him.
The missing plane was operated by AirAsia Indonesia, a unit of Malaysian-based AirAsia which dominates Southeast Asia’s booming low-cost airline market.
Indonesia, a vast archipelago with poor roads and railways, has seen explosive growth in low-cost air travel over recent years.
But the air industry has been blighted by low safety standards in an area that also experiences extreme weather.
AirAsia, which has never suffered a fatal accident, said the missing jet last underwent maintenance on November 16.