“ To every action there is always an equal and opposite reaction”

What are action and reaction?

Action and reaction are two forces which are equal in magnitude but opposite in direction.

Here -ve sign shows that reaction is in opposite direction of the action.

The answer is that two forces which are equal in magnitude but opposite in direction cancel each other effect if they are acting on the same body having same line of action at a time .But here two forces (action and reaction) are not acting on same body, action is on one body and reaction is on another body .Hence action and reaction never cancel each other effect although they are equal in magnitude and opposite in direction.

In our daily life we can observe many examples of action and reaction. Some examples are given below:

In jet airplane action and reaction law is applied. Hot gases burn and eject out from the tail of airplane in backward direction, which is the action of gases on air , the reaction of which pushes jet airplane with great speed.

The same principle is also applied on moving rocket. 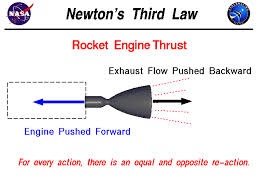 In short there are many practical applications of Newton’s Third law of motion.

In the same way IN the picture a man exerts a force of 100 newton on wall as action. As a reaction wall also exert a force of same magnitude of 100 Newton but in opposite direction. 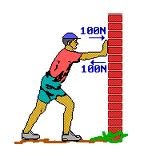 ABOUT SERIOUS OF BLOG "NEWTON"S LAWS OF MOTION:

It was last part of my serious of blogs 'Newton's laws of motion" in which I explain classical basic dynamics.I hope it will be very informative for physics students. In future I write such serious of blogs on different  science topics.