The Oppo N1, that released last year, was quite an interesting device, offering unique features like a swivelling camera and a rear touch panel. Despite its great specs, features, and price tag, what may have been a turn off for some consumers its large size, courtesy and its large 5.9-inch display. To counter that, and in keeping with the trend that most Android OEMs now follow, Oppo released a “mini” version of its device. Here’s our comprehensive review of the Oppo N1 Mini! 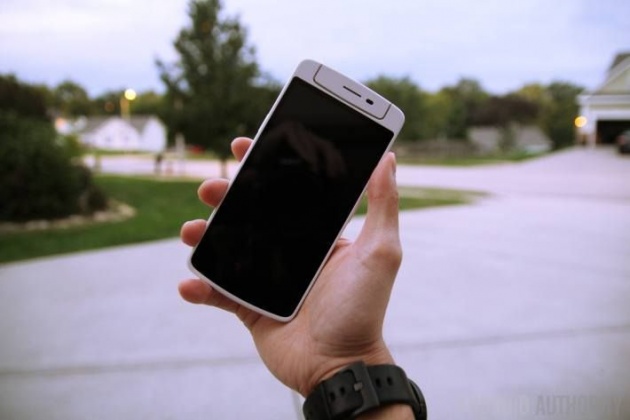 The design aesthetics of the N1 Mini is identical to its larger sibling, only comparatively more compact. That said, the Oppo N1 Mini isn’t exactly a small device by any stretch of the imagination, and is in fact, slightly larger than other 2014 flagships like the HTC One (M8) and the Samsung Galaxy S5.

If you liked the unibody design of the Oppo N1, you’ll have no complaints with this device either, with the N1 Mini also featuring the solid build quality of the former. It’s made entirely of plastic, and at 9 mm thick and weighing 150 grams, it’s certainly not the thinnest or the lightest device. But its heft actually contributes to a great feel in the hand, with its curved back making it very comfortable to hold. This review model comes with a matte finish, allowing for a good grip, and the gold trim that runs around the perimeter actually adds to the grip as well, in addition to giving the N1 Mini a classy look.

You’ll find the power button on the left side of the phone, which might take some getting used to, depending on which device you’re switching from. The volume rocker is on the right, and the microUSB port, headphone jack, and speaker, all found along the bottom. The speaker does sound quite good, but its unfortunate placement means that you may end up covering it while watching a video or playing games with the device in the landscape orientation.

With the exception of the Sony line of Xperia Compact smartphones, a mini version of a flagship device usually comes with a downgrade in the specifications as well. In the case of the Oppo N1 Mini, that begins with its display. You get a 5-inch LCD display with a 1280 x 720 resolution, resulting in a pixel density of 294 ppi. While its not 1080p as you might have hoped for, this display still looks pretty sharp overall. The viewing angles are good, there are no issues with brightness, and you also get vibrant colours that don’t look overly saturated, allowing for a surprisingly pleasant experience on this display.

Under the hood, you get the quad-core Qualcomm Snapdragon 400, clocked at 1.6 GHz, backed by the Adreno 305 GPU and 2 GB of RAM. The Snapdragon 400 has proven to be a very capable processor that is quickly becoming the standard when it comes to mid-range devices, and allows for a pretty smooth experience on the N1 Mini as well. Swiping and scrolling were smooth, apps opened and closed quickly, multi-tasking was a breeze, and overall, there were rarely any instances of noticeable lag. Understandably, this processing package doesn’t hold a candle to ones that are found on high-end flagships, but the performance is still very good.

You get 16 GB of built-in storage, but there is no microSD card slot, so that is something to consider, and may require some memory management on your part, depending on how much you like to save on your smartphone.

The Oppo N1 Mini packs a 2,140 mAh battery, which might be a little small by current standards, and that shows in the battery life, that is just about average. You won’t have too much trouble getting through a full day with moderate use, and I was able to get up to 4 hours of screen-on time while performing regular tasks throughout the day like sending texts, checking Facebook and Twitter, watching YouTube videos, and playing some games.

One of the most unique features of the Oppo N1 is its swivel camera, and that makes a return on the Mini version as well. You get a 13 MP shooter that functions as both the rear camera and the front-facing camera, that will allow you to take some high-quality selfies, if that’s something you’re into. Of course, this means you don’t have a dedicated front-facing unit, but its not very often that you’re both camera units simultaneously anyway.

The camera software is quite basic and simplistic, with a few shooting modes available that isn’t different from what you’d get with any other smartphone camera. There is no HDR mode, but the Ultra HD Mode from the original Oppo N1 is available here as well. That said, while this mode allowed for 50 MP shots on the bigger device, in the case of the N1 Mini, you get the option of taking 24 MP photos.

As far as the picture quality is concerned, the camera of the Oppo N1 Mini is more than decent. Given the right lighting conditions, images are crisp and clear, with good colour reproduction and dynamic range that wasn’t too bad either, resulting in some well balanced shots. As is the case with a lot of smartphone cameras, low light photography isn’t the best, but this camera is pretty good overall, and as mentioned, gives you the ability to take some high quality selfies.

The Oppo N1 Mini features the Color OS, based on Android 4.3 Jelly Bean, which is a little outdated at this point, but hopefully means that an update to the latest version of Android is coming up soon. Color OS does include some interesting additions, such as the panel of toggles in the notification dropdown, where a brightness slider can also be found, You can also download an install themes if you don’t like the way it looks out of the box, and it’s always nice to have some form of customization readily available. Features such as the screen gestures are also available here, allowing you to use preset gestures to open the camera, turn on the flash, and more, or set a custom gesture to launch a particular application.

The Oppo N1 Mini is currently available for $529.99 from Amazon, which is definitely steep given its mid-range nature, and the fact that there are some high-end smartphones out there in the same price range, if not cheaper. If you are considering picking one up, it does offer 4G LTE support on T-Mobile and AT&T, so that is something you won’t have to compromise on, as you sometimes might with devices from other Chinese OEMs.

So there you have it – a closer look at the Oppo N1 Mini! If you loved the Oppo N1, and only wished for it to be smaller, the N1 Mini is the answer, also offering a solid build quality and the unique swivelling camera. That said, don’t be deceived by the name, there’s nothing mini about the N1 Mini, in terms of size. Specifications are lower though, and the price tag is difficult to justify, especially with high-end smartphones like the Moto X and OnePlus One (if you can get one) in the scene.