This Monday marks a significant event in the history of my country, the Philippines and that is because it is the 119th Independence Day. So this blog is intended for the celebration which had given the Filipino people the democracy and freedom we are experiencing right now.

Being free is a very essential thing in a country. Being free means that you have the every right to almost everything around, right to speech, right to information, right to choose your religion and a lot more where one can freely choose whatever you want as long as it is abiding to the law of the land. The freedom which we are experiencing was because of what the Katipuneros and the heroic act of our ancestors and thus this significant event is celebrated each and every single year as a gratitude of every Filipino standing to those who have given up their lives for the betterment of their future generations. A snappy salute to the heroes of Independence.

As mentioned earlier, this blog is intended for today's celebration. These trivia here are just random ones and I have information here which I had to relearn as it had left my memory as I was growing. Here are the remarkable items or trivia for Independence Day:

1. There were different dates for Independence Day.

Actually, the annual June 12 observance of Philippine’s Independence Day came into effect after past President Diosdado Macapagal signed the Republic Act No. 4166. This Act legalized the holiday, which is based on the Declaration of Independence on June 12, 1898 by General Emilio Aguinaldo and Filipino revolutionary forces from the Spanish colonization.

However, this liberty was not celebrated that long just because Spain and the United States did not recognize the declaration. So there was another revolt against the United States in 1899. This revolt ran for almost five decades until the US approved it.

The Philippines only achieved national supreme power or authority on the day of July 4, 1946, with the help of the Treaty of General Relations and Protocol signed by High Commissioner Paul V. McNutt as a representative of the United States and President Manuel Roxas representing the Philippines. Independence Day was officially observed on July 4 until the Republic Act No. 4166 had set out to move the holiday to June 12 which was approved on August 4, 1964, finally.

In short, the original date was re-recognized only after the signing of Republic Act No. 4166 but it was supposed to be July 4, just like the United States'. But gladly, it was changed and now it's the date which has been declared to be a holiday, no work and no classes observed on this day.

2. The first Philippine flag was made in Hong Kong.

In Tagalog, it is referred as "Pambansang Watawat ng Pilipinas"

Based on the history of the Philippines, General Emilio Aguinaldo was exiled to Hong Kong and that's when he asked a certain Marcela Agoncillo to sew the first Philippine Flag according to his preferred design as follows:

The flag's length is twice its width, giving it an aspect ratio of 1:2. The length of all the sides of the white triangle are equal to the width of the flag. Each star is oriented in such manner that one of its tips points towards the vertex at which it is located. Moreover, the gap-angle between two neighbors of the 8 ray-bundles is as large as the angle of one ray-bundle (so 22.5°), with each major ray having double the thickness of its two minor rays. The golden sun is not exactly in the center of the triangle but shifted slightly to the right. This flag is waved when having ceremonies.

For the symbols and their meaning for the Flag of the Republic of the Philippines, refer to the information below: 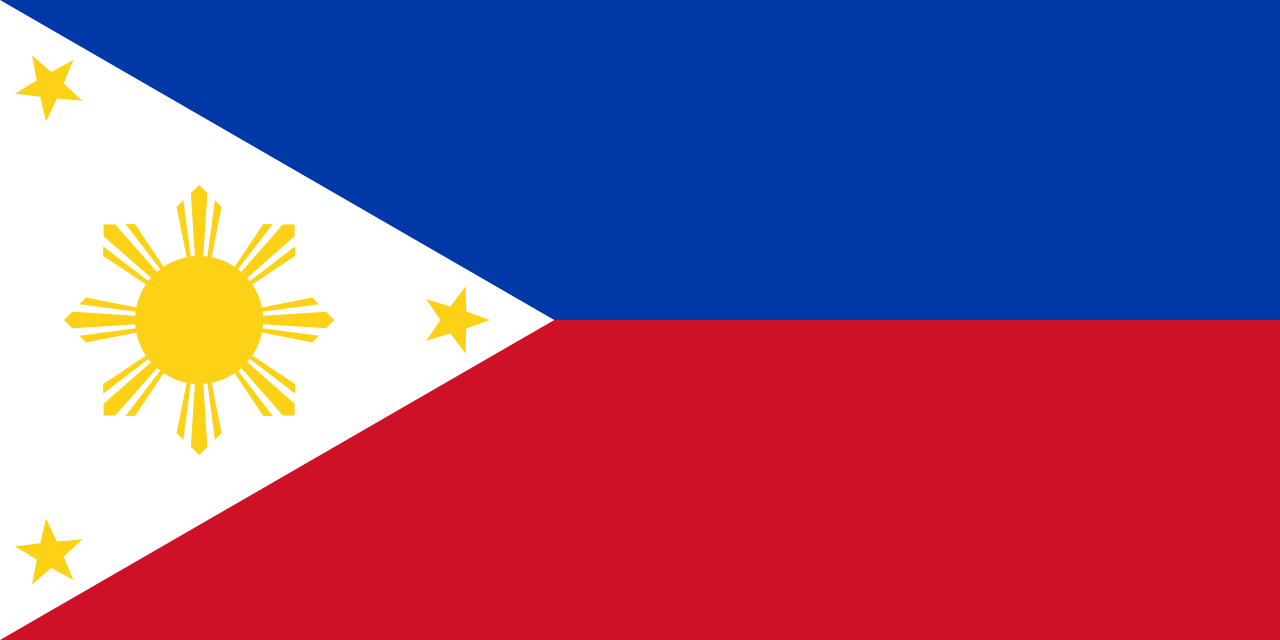 Three stars on the corners of the triangle – the three main geographical regions of the country namely Luzon, the Visayas, and Mindanao.

The sun at the center of the triangle – has eight rays representing the eight Philippine provinces that started the revolt against Spain.

Monument displayed at the Marcella Agoncillo Mansion, the sewer of the 1st Philippine Flag in 1898. Photo credits: mylocalite.com

On June 12, 1898, the Philippines’ flag was raised and its national anthem was played for the first time in 1898. However, the sewers of this flag were Marcela Marino de Agoncillo with the help of her daughter Lorenza and Delfina Herbosa de Natividad, a niece of José Rizal, the Philippines' National Hero.

As a little information of what happened during the making of the flag, here are the details:

The process took only a short time, but it was difficult. The three worked manually and with the aid of a sewing machine. They had to redo the flag after the rays of the sun were not in the proper direction. Their eyes and hands suffered due to the prolonged work session. Made from fine silk which she bought in Hong Kong, the flag was embroidered in gold and contained stripes of blue and red and a white triangle with the sun and three stars on it. The flag was finished in five days and became known as "the sun and the stars flag".

Her memorial statue is displayed as well in Batangas Provincial Capitol while a monument which is referred as "Three Women Weaving the Filipino Flag "monument by Napoleon V. Abueva erected in UP campus to commemorate the historical sewing.

4. The first president of the Philippines is General Emilio Aguinaldo.

Emilio Aguinaldo was a son of a Chinese and Tagalog descent. Growing up in studies, Aguinaldo returned home to Kawit, where he developed a growing awareness of Filipino frustration with Spanish colonial rule. He then joined a specific group and became the leader.

Emilio met Andres Bonifacio in the Pilar Lodge chapter of the Freemasonry in 1895, this was a government- and church-banned resistance group. Being eager to fight for the cause of Philippine independence, in 1895 Aguinaldo took up with a secret society of revolutionaries headed by fellow lodge member Andres Bonifacio.

To make the story short, after all these revolution, on June 12, 1898, Aguinaldo at last declared Philippine independence. Announced from his hometown of Kawit, Aguinaldo's proclamation put an end to four centuries of Philippine oppression under Spanish Colonial rule. However, there was another revolution against the United States because of other conflicts on the said independence proclamation.

All good things end and Aguinaldo was not an exemption. He eventually died of a heart attack on February 6, 1964, in Quezon City, Philippines.

5. Every vehicle and establishment has Philippine flags on them.

I am not sure if every Filipino knows this, I admit I was not aware that there's this thing called Flag Day in the country. I forgot if this was taught during my grade school and secondary years but when I was creating this blog, I learned and re-learned a lot about our country's history.

No wonder why days before the Independence Day, flags are seen in various places across towns and cities in the Philippines during the country’s. Many cars also sport miniature flags. This is not just because of the Independence Day but also for the Flag Day.

Originally, June 12 was referred as the Flag Day but the term Flag day was moved to be celebrated every May 28 to Philippine Independence Day on June 12. This was declared President Fidel V. Ramos ordering government departments, agencies, offices, government owned and controlled corporations, state agencies, and local government units, and even private establishments, to prominently display the National Flag in all public buildings, government institutions, and official residences during this period, and ordering the Department of Education, in coordination with the private sector, non-government organizations, and socio-civic groups, to enjoin the prominent display of the National Flag in all public squares and, whenever practicable, in all private buildings and homes in celebration of national independence.

6. Celebration includes marching on streets for all government sectors and some private ones, No work and classes too.

Independence Day is a day when many people, including government officials, employees, and students, participate in nationwide parades. Ceremonies and parades are indeed seen on this day. In fact most Filipinos would stay at parks and witness the celebration.

The main event on this day is the traditional Independence Day rites in Luneta where the shrine of national hero Jose Rizal is located.

However, there are also simultaneous raising of the National Flag of the Philippines in various historical places nationwide.

Last year, 2016 bitlanders had joined the celebration of the Philippines Independence Day with the introduction of the Tiaras and other Filipino costumes available at the bitlanders shop.

Tiaras are these crowns which has colored stones in them which are not only attractive but also helpful in terms of their buzz score. Tiara is similar to bitlanders' King crown which was something I had dreamed of owning when it was first introduced but unable to do so because it was very expensive. While the King's crown was made available on January as a celebration of the three kings, bitlanders made the Tiaras for Philippines Independence Day as well.

Last year, bitlanders offered two Tiaras, an aquamarine with diamond and a Quartz and diamond one.

This year, they are offering only one which is the Amber & Diamond Tiara! Please check the previous blog I posted about the other previous Tiaras here:

Tiara: Is It a Yay or a Nay

So I have to grab this new available Tiara which will help my avatar become more attractive but also will help me with my buzz score which will run for couple of weeks.

I hope the information I have posted had given you new ideas and knowledge about the Filipino traditions and celebrations. Indeed the Independence Day is not just an important celebration but a significant historical event of each Filipino citizen.