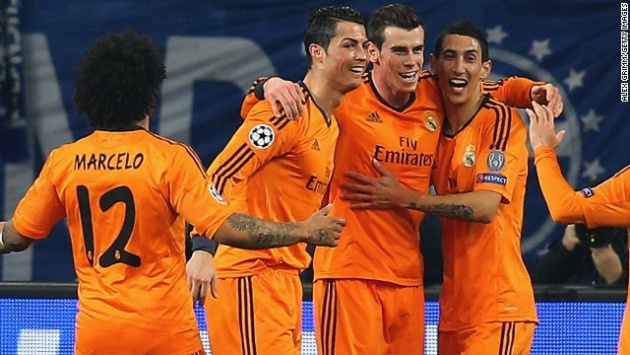 Real had only won once in 25 previous trips to Germany but the Spanish aces buried their German hoodoo with a magnificently marauding 6-1 victory on Wednesday.

Ronaldo, back to pull the strings in midfield after a three-match domestic ban, Karim Benzema and Gareth Bale all scored twice in a dazzling display.

Ronaldo, who has scored 36 goals in 33 games, is now also this season's leading scorer in the Europe's elite cup competition with 11 goals.

The Portugal captain became only the third player to pass 60 goals in the Champions League, and is now five behind Lionel Messi's 66 -- with former Real and Schalke star Raul leading the way on 71.

His first at the Veltins-Arena was vintage Ronaldo; he bamboozled the Schalke defense with some fancy footwork before firing the ball into the net.

His second in the 89th minute wasn't bad either as he rounded the keeper before similarly blasting the ball home.

"The team has played a lot of good games and this is one more," Ronaldo told reporters.

"We played well and didn't allow Schalke to play at their best. We are happy and a step away from the next round.

"The Schalke goalkeeper did very well and made good saves, but I believe in my ability and my teammates helped me a lot."

Dutch striker Klaas-Jan Huntelaar had the last say on the pitch as he sent a zinging shot into the top corner as a late consolation for the home side.

The goals were not quite so free-flowing in Istanbul, where Chelsea boss Jose Mourinho pitted his wits against Roberto Mancini's Galatasaray.

Just two days after Mourinho criticized his attackers in a leaked private conversation, he watched his team settle for a 1-1 draw against the Turkish champions.

Fernando Torres, chosen to spearhead Chelsea's strike force ahead of Samuel Eto'o, put the English Premier League leaders ahead after just eight minutes when he strolled in Cesar Azpilicueta's clever pass from a counter-attack.

After a rocky first half, Mancini made a tactical switch and Galatasaray recovered their poise, pressing forward to urgent whistles from their vociferous fans.

Former Chelsea player Didier Drogba, facing his old teammates for the first time since his 2012 exit, helped drive the equalizer with his muscular presence.

But it was defender Aurelien Chedjou who tapped in Wesley Sneijder's corner to level the match for the Turkish champions after 64 minutes.

"In the first half we were too deep and played with fear," Mancini told broadcaster Sky Sports. "But I'm happy with the second half and 1-1 is a good result."

Galatasaray had a goal disallowed in bizarre circumstances in the first half when two balls were in play at the same time.

The Turkish side scored from a hastily taken throw-in but Chelsea captain John Terry was still holding the original match ball.

Mourinho may have more puzzling conundrums to ponder after the first leg of the last-16 tie.

With Galatasaray's defense worryingly exposed in the first half, Chelsea missed a golden chance to go home with an away victory in the bag.

"I can't complain; the players were fantastic. The result is not amazing and the second leg will be difficult, we have to try to go through."

The decisive return leg will be played on March 18.