METAMORPHIC ROCKS
Temperature: Rocks are made up of various minerals which are usually stable below or up to the temperature of 200 OC – when the temperature surrounding a rock rises above the said temperature, then then the nature of constituent minerals also changes accordingly and hence the nature of that rock
Unmetamorphosed pre-existing rock is known as Protolith – it may be an igneous rock, sedimentary rock or another metamorphic rock
Metamorphism takes place at a temperature higher than 200 OC, usually around 1000 OC and pressure around 1,500 bars (1 Bar = 14.5 psi = 100 KPa)
Metamorphic rocks are usually formed from Tectonic Processes mostly from Continental Collision [it is a phenomenon of Plate Tectonics (a theory that describes the movement of lithosphere – considered as whole the Crust: 100 km and upper most mantle: 100 km below the Crust) of earth that occurs at Convergent Boundaries]Convergent Boundary is also known as Destructive Plate Boundary; it is an actively deforming region where two (or more) tectonic plates or fragments of lithosphere move toward each other and collide. As a result of pressure, friction, and hot molten material of the colliding tectonic plates (usually occurring in A sthenosphere – uppermost part of mantle situated between the depth of 100 to 200 km from the earth surface), earthquakes and volcanoes take place near convergent boundaries 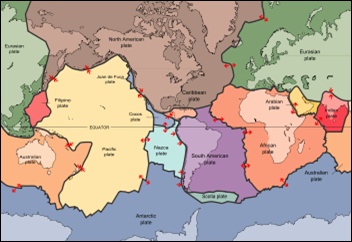 A Met. Rock is exposed to the surface by: (i) Erosion (ii) Tectonic Uplift
Common examples of metamorphic rocks: Gneiss (a Met. Rock of Granite), Slate (a Met. Rock of Shale), Marble (a Met. Rock of limestone or dolomite), Schist (a Met. Rock of micaceous ign. rock – an Al. Sil. Ign. Rock), and Quartzite (a Met. Rock of quartz-sandstone)
Minerals of Met. Rocks: These are mainly the Metamorphic Minerals also known as Index Minerals – the minerals which are formed in the process of metamorphism only E.g: Sillimanite (an Al.Sil. mineral), Kyanite (blue sil. mineral), Staurolite (a complicated bimetallic mineral of Al. Sil. containing O4 and O6), Andalusite (an Al. Sil. mineral containing O5) and Garnet (a well known reddish silicate mineral)
Pre-existing Minerals present in Met. Rocks are: olivine, pyroxene, amphibole, mica, feldspar and quartz – these minerals are mainly formed during the formation of usually Volcanic Igneous Rocks by the process of crystallization. These minerals are highly stable at high pressure and temperature and remain chemically unchanged too in whole the process of metamorphism
: The change in particle size of a rock during metamorphism is called Recrystallization
Example: small calcite crystals in the sedimentary rock of limestone and chalk change into larger crystals in the metamorphic rock marble or in metamorphosed sandstone
Recrystallization of the original quartz-sand grains results in compact quartzite and very compact quartzite known as Meta-quartzite, in which the larger quartz crystals are interlocked with each other
Both high temperature and pressure contribute to recrystallization
Extremely high temperature causes the atomic bonds to break and the atoms move and form new bonds with the other atoms creating new minerals with entirely different chemical composition and constituents and different crystalline structures – the process is known as Neo-crystallization
In Recrystalizaion, the atoms and ions in solid crystals move across, thus changing only the set up of the crystals, while high pressure causes the solution of crystals within the rock to react with each other
Foliation: Layering in Met. Rocks is called Foliation – it occurs when a rock is shortened along one axis during re-crystallization
Foliation causes the platy or elongated crystals of minerals, such as mica (platy) or chlorite (elongated) to rotate in such a manner that their longer axes are perpendicular to the orientation of shortening. This results in banding and foliation; banding shows the colours of the minerals that formed them and foliation is exhibited in form of layering of the minerals in a met. rock – Marble is an example of Banded Met. Rock and Slate is the example of Foliated Met. Rock
Foliated rock is the product of Differential Stresses that deform the rock in one plane, creating a plane of cleavageAnother important mechanism of metamorphism is: Chemical Reactions which occur between the minerals without melting them. In the process, atoms are exchanged between the minerals, thus entirely new minerals are formed
Metasomatism is a drastic change in the bulk chemical composition of a met. rock occurs during the processes of metamorphism. It is due to the introduction of too many chemical compounds from the surrounding rocks. Water may transport the plenty of chemicals over great distances in short time
Types of Metamorphism: (1) Regional Metamorphism: Regional or Barrovian Metamorphism covers the continental crust mainly associated with mountain-ranges. The collision of two continental plates or island arcs (chain of islands comprising volcanoes in arch-shaped alignment located close to a boundary of tectonic plates) with the continental plates produce the enormous compressional forces required for the regional metamorphism
These mountains are later eroded exposing the intensely deformed rocks to the surface
(2) Contact Metamorphism: Type of metamorphism that takes place by coming in contact of either very hot magma or very hot  boiling fluids usually the water, with the cooler country rock
Thermal Metamorphism: When magma is intruded into the surrounding rock (country rock) – the temperatures are highest at this boundary (of the reacting magma and country rock) and decrease with distance from it
    The area surrounding the intrusion where the contact metamorphism effects are present is called the Metamorphic Aureole – Contact Metamorphic .  may not exhibit the sign of strong deformation and are often fine-grained in nature
   Contact Metamorphism: 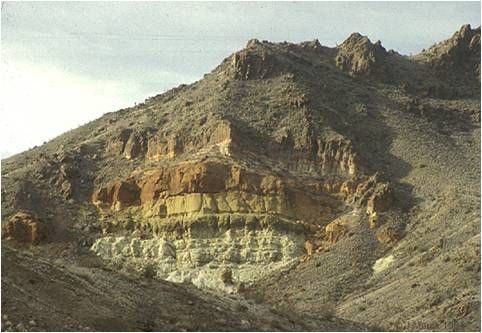 Hydrothermal Metamorphism: It is the result of interaction of a rock with extremely high-temperature fluids usually the water containing variable chemical constitution and composition. The difference in chemical composition of the pre-existing country rock and the invading fluid initiate a set of metamorphic and circulating deep ground water or oceanic water
(3) Shock Metamorphism (also known as Impact Metamorphism): This kind of metamorphism occurs when an extraterrestrial object e.g. meteorite (a solid piece of debris entering from the outer space) collides with the Earth surface or during an enormous and violent volcanic eruption. This metamorphism is characterized by ultrahigh pressure condition. E.g. is Coesite (a bluish polymorphous form of SiO2.