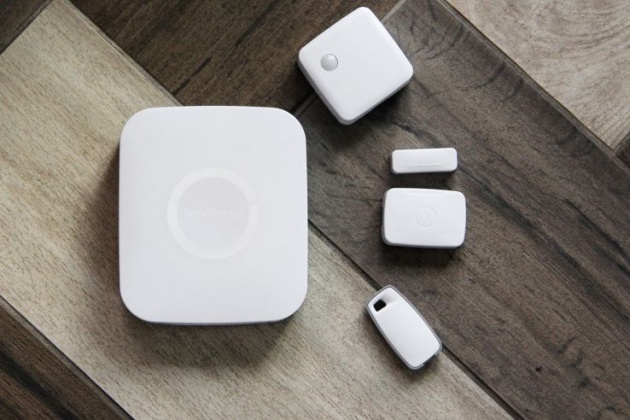 SmartThings’s smart home devices are getting a lot sleeker — and a lot more powerful — as of today.

The company today is releasing a new line of updated home sensors and a new, more powerful hub. In addition, SmartThings is rolling out a more simplified application centered around specific events and spots in a home, such as a bedrooms and kitchens for locations, and events like intrusions. The company is also releasing a new set of developer tools that are designed to make it easier to integrate new devices with the SmartThings hub.

“To make it easier, basically, the next-generation products aim to solve that ‘is everything ok at home?’ problem out of the box,” SmartThings CEO Alex Hawkinson said.

SmartThings is releasing an update to its five sensors to make them feel more contemporary, but there are nearly 200 compatible devices in the SmartThings ecosystem, Hawkinson said. Part of the selling point of the SmartThings hub is that it’s attached to an open ecosystem where the technology is constantly evolving and completely open, and there are over 10,000 developers in the community.

The new hub comes with a more powerful processor that enables video monitoring and a battery that will allow it to operate for up to 10 hours if the power goes out. It will also remain connected to the devices in the home, allowing it to handle some processes without actually being connected to the Internet using Zigbee, Z-wave, and local IP connected devices.

These new releases come at a time when connected devices are becoming ever-increasingly present in the home. Google bought companies like Nest and Dropcam to get into homes. Companies are even trying to develop smart appliances like refrigerators. Samsung’s acquisition of SmartThings increasingly makes sense as more and more connected devices roll out.

“What we found was in the smart home, the reason the race is on now, once someone gets up and running you look for things that are compatible and then you spread out from there,” Hawkinson said. “You might start someone with home monitoring, but then they might be interested in connected lighting.”

Of course, the elephant in the room is HomeKit, Apple’s smart home platform. Apple isexpected to unveil a new Apple TV later this year, and it’s certainly possible that it could become a powerful hub for smart home devices. But SmartThings has built a first-mover advantage and a large developer ecosystem to the point that it could dwarf Apple’s HomeKit platform.

For example, when a door is opened it may trigger an event in the app that indicates that someone has entered the home. It uses a small multi-purpose sensor that would attach to a door to detect that it opens, and if it’s opening at a time that’s unexpected, it may flag the owner that an intrusion is taking place.

A connected SmartThings camera won’t actually stream video to the cloud all the time. Instead, it will only stream a recording over the Internet when viewed through the app. The device also has a buffer of the video before the event and after, so the user can see a clip of what happened around the event — which is free until the end of the year, and then becomes a premium service that costs $4.99 per month.

All this hardware connected to the internet of course brings a level of risk to a user’s security. To mitigate that, SmartThings regularly pays for third-party audits, Hawkinson said. If a device is certified with SmartThings, it “has a very locked down path” from the device to the cloud, the hub and the account, and SmartThings can also issue firmware updates to it.

“Everything we do is open, we publish a security white paper, and we have a certification program,” Hawkinson said. “When developers come they can build stuff in a sandbox, but once they want to expose it to others it runs through these formal tests.”

The hub will cost $99, and the sensors range from $30 to $55. They’ll be available for purchase today on the SmartThings and Samsung websites.