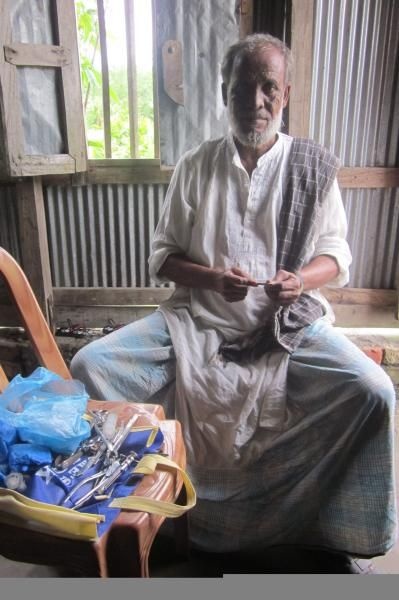 Nurul Amin, 60, of Sagoria Bazar in Burir Char Union of Noakhali's Hatiya Island, spent his younger years pursuing the career of snake charming. From there, like most snake charmers he knows, he switched to dentistry.

“I felt guilty about cheating people,” says Amin, who's been a dentist for 35 years. “It's why I became a dentist. That was a bad business but this is solid.”

Village dentists like Amin have no qualification. They arrive at a patient's house with dental tools and experience removing cobras' fangs.

On Hatiya Island with over 400,000 people there is probably only one dentist of the usual sort. The village dentists, often former snake charmers, take care of the vast bulk of dental needs.

Amin's former career began while still at school.A snake charmer visited the area and it would seem he didn't only charm the snake. He also charmed Amin who decided to follow him.

Some days later when Amin returned home his parents hit him. “Why do you want to do that?” they scolded, “It's a cheating profession.” It was a turning point. Angry with his parents, he returned to the charmer.

During training he handled snakes daily. By age 17 he had his own snake.

“First we'd milk the snake of its venom,” he says, “then cut the fangs out. The fangs regrow three or four times; after that they don't regrow.” Amin force-fed his snakes with small fish once a fortnight. On average, they livedabout five years.

One snake survived for seven years but Amin never held any particular attachment. “A snake doesn't recognise anyone,” he says, “They're selfish.”

During their hibernation months Amin kept his snakes in straw for warmth. But even during those months he would wake them for his canvassing shows, where he sold bottles of fake anti-snake potion and tabiz spell-bracelets to ward off snakes. As a canvasser Amin made up to 5,000 taka per day – a lot of money back then.

“The trick of snake charming is that they can't see behind them. We grab them from behind.”

It's not the only trick. Sometimes he used non-venomous snakes, especially the dharai snake which would make a big bite with lots of blood, impressive to onlookers. They also used Gaultheria medicine, putting the substance in the snake's tooth holes beforehand. When the snake bit, people thought the drops of medicine were venom. Amin would lick it off his arm and swallow it.

Once, Amin was bitten. “I was told the snake had no teeth,” he says, “so I opened its mouth and rubbed my finger inside. I saw blood.” For snake bites, charmers believe putting the wound in fire can help. They use salt and opiates.

“If a snake bites an opium addict, sometimes the snake will die,” believes Amin.

The day he was bitten was busy. It was the market before Eid and he sold many spell-bracelets. But by evening, in the tea shop, he began to feel dizzy. “I was only half-poisoned,” he says. He was unconscious for four days.

But most snake charmers don't die of snake bite. “They drink too much,” says Amin, “It's the alcohol that kills them.”

As a village dentist Amin makes up to 5,000 taka per month – what he used to make in a day. Now and then the father of four still turns his hand to snake charming, but his sons did not inherit the skill.

“I wouldn't let them near the snakes,” he says, “It's a cheating profession. If they'd ever done that, I would've thrown them out of the house.”

Dental Caries: Their Cause and Prevention

Tooth rot is a procedure in which the finish of the teeth is totally crushed. Appropriate brushing a…

A Pakistani Girl Cross the Snake From Nose To Mouth

THE NATURAL BEAUTY OF INDONESIA Indonesia as known as emerald equator or zamrud khatulistiwa. indone…