Stand Up for Your Rights: An Action Call to Women 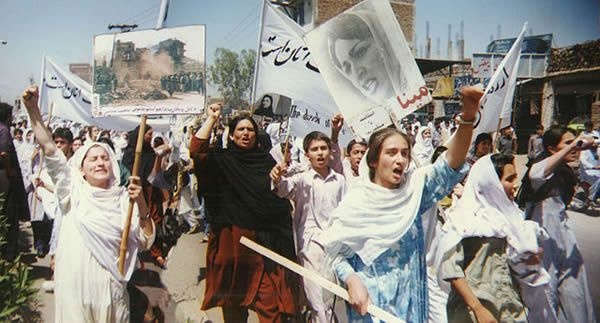 How can we women blame inequality while we do not pursue equality for ourselves? I am tired of people blaming everyone else. Equality needs to start within our hearts and minds so it can spread to our houses. If we don’t have an equal society, it is because we don’t treat each other equally at home.

I am not blaming women: I am questioning their motive. Why don’t women do something to separate themselves from inequality? I am upset with women who drag themselves when they have feet to stand on and those who kiss their husbands’ kicks and fists or blame God for their fate; those who hear their husbands’ insults and fear objecting; those who sacrifice themselves and their children by becoming an angel in front of a devil.

Women are not the victims. In their silence and fear they often become the real oppressors. It is hard to live without a husband and money, but it is a moral crime to tolerate a tyrant. True, the society is harsh and male dominated, but a safe paradise won’t land in women’s laps. Women must take the first steps, take the risk and decide to become financially independent. Where is that fearless woman who says “enough is enough,” goes to court, and divorces an abusive husband? Where is that fearless woman who fights for custody of her children, then gets a job to support herself and her children? Where are the fearless sisters to support such women? Where are our female judges to defend women’s rights when the Afghan male judge asks a woman to marry him in order to approve her divorce? Where are the women police officers to throw the corrupt judge into jail?

We need religious sisters to modify Sharia laws so they don’t say two female witnesses equal one male witness. We need female Mullahs to interpret and explain Quran verses in a way that it doesn’t crush women’s hopes. Where is that female Mullah who says a man shouldn’t have more than one wife because a woman can’t have more than one husband? Why do we allow men to dictate the religious laws of womanhood? Do they understand us better than we do? If women do not stop the inequality and injustice, nobody will do it for them. To define equality, we must first see the inequalities.

In Afghanistan, inequality has roots in our beliefs, teachings, and lifestyle. An Afghan girl grows up to experience her inferiority to a male. Age doesn’t matter; she will not have a man’s freedom. When she goes out, a man or a group of women need to accompany her to protect her from the harassment of other men. Women are told to be quiet, not laugh or wear colors or make eye contact and to not live happily and freely like men. This is why many Afghan women lack confidence, because we were raised to look down and change our way when a man walks towards us, or says we ought to. The list of inequalities is like a continuous nightmare, with constant blows of a hammer to the head.

An Afghan girl can’t fall in love with the boy she loves because she will be killed or beaten to death. An Afghan boy can marry without his father’s permission but if an Afghan girl escapes with her lover and is captured by police, she will go to prison. Society, laws, men, other women all join together to suppress Afghan women. She can’t get a passport without approval of the men in her family. Her husband can have more than one wife; she will inherit only half of what her brother will inherit. These are some of the inequalities Afghan women face daily.

We don’t see how inequality becomes finely woven into our behaviors, our literature, our history, and daily lives. It is only when we get away from Afghanistan and live in a liberal country that we see the reality. While a five-year-old girl knows how to swim in the United States, I learned to swim at twenty-three when I came to the U.S.A. We have swimming pools in Afghanistan, but they are only for boys. Rivers, lakes, and public waters are for boys. Is there not even one wealthy woman in Afghanistan who can invest in a swimming pool for women? Or should we wait for men to do it for us?

It makes me sad to see educated people justify the inequality. I see Afghan girls put their brothers’ pictures on Facebook and praise and adore them, but I never see Afghan brothers do the same for their sisters. A friend told me she doesn’t feel comfortable if her brother posts her picture on Facebook. Another friend said this is all because women are considered namous—”honor” in Dari. What I see is a huge gap between the meaning of the word and how it is used. Namous is used to control women and deem them weak.

I read in the Afghan news how a religious ceremony was conducted for nine-year-old Afghan girls who have arrived at puberty and how they should perform religious duties such as praying and fasting. Why don’t boys have the same ceremony? Do only girls need to be religious? Why? To be controlled by Mullahs? To be told how to behave, dress, and serve their husbands? I question these kinds of inequalities because I know how negatively they impact women’s lives. I don’t want to be the one who lives in a foreign country and preaches, because we have had enough slogans and words. If we put half of that effort into action, we would have a great country. I know the difficulties. I understand the injustice women experience, but no one will help women if they do not help themselves. I overcame many barriers to achieve some of my rights, and still my fight continues.

We are all together in this battle, all women around the world. While women in America fight for equal pay, Afghan women fight for the right to work, to be present in society, and to be respected and supported. Nothing comes from blaming. Justice can’t be achieved if we don’t have equality and equality can’t be reached if we don’t go after it, and act upon righteousness. Yet the important question remains: When will women achieve equality? We won’t know until we act.

We won’t achieve equality if we don’t become a force for it ourselves. Equality is often explained to us like a forbidden fruit—we might get blamed for extending our hands to reach it, but God knows it is our right to have it. We were born equal and we will die equal. Our life’s goal should be to live equal.