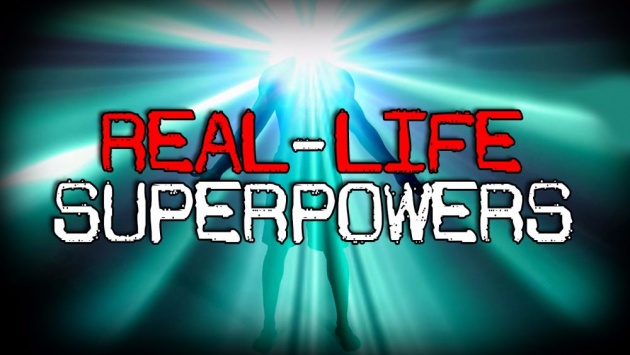 As our whole body is incredible gift from God, which has ability to fight against different diseases and infections, heal itself of severe injuries and give birth to a new life.

I know including me you guys also have watched lots of different popular Hollywood movies about superheroes like Superman, Batman, Wonder Woman etc, televisions seasons like Heroes, The Flash, Supergirl etc and red comic books like Naruto (my favorite), Bleach, Marvel (marvel comic characters) too. We know all these characters are just fictional characters but after watching and reading we create a fantasy world in our mind that where a human body can do amazing things like cast magic spells, shoot laser lights from eyes, become invisible, fly and control the elements etc. Often we think that a human in real life has these superpowers or just a fantasy that is limited to Hollywood movies and the comic books??? But, you know on this earth there are few special humans across the world that have been born with special God gifted powers which we would call superpowers or super humans. Today here in my blog I am going to tell you about such people who have superhuman powers.

Wim Hof is known as Ice Man, he has extraordinary ability to resist in extreme cold temperature. Wim Hof has made twenty one Guinness World Records in which one of his popular world records is longest ice bath which was more than an hour and thirteen minutes. Beside this Wim Hof has also climbed on top of the Mount Everest just wearing shorts where do you know temperature vary between from minus thirty five to minus sixty degree Celsius. So you can say he is the real life Ice Man. 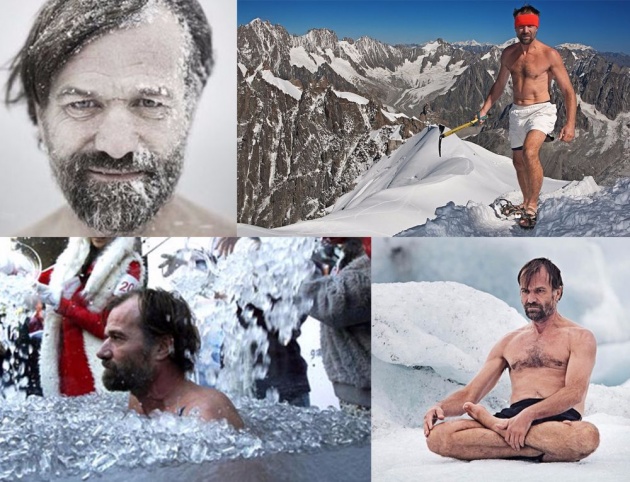 Stephen Wiltshire belonged to London and was born in 1974. Stephen had crazy visual memory. He looked at the object just once and had the ability to create a drawing of the object in immense detail and accuracy. Due to his this ability, Stephen has also invited by a British empire. Stephen Wiltshire has also ability to create a drawing of cityscapes. For this purpose he rides on a helicopter and after viewing briefly just once time can paints accurate cityscapes. He has made drawings of so many countries around the world like New York, Dubai, Hong Kong, Tokyo, Singapore and Rome. In London Stephen has a permanent photo gallery of numerous drawings and paintings on the Royal Opera Arcade.

Daniel Browning Smith, belongs to United Sates of America and he is not only an actor but has extraordinary ability of flexibility. That is why he is also known as the Rubberboy. Due to his superhuman flexibility has broken five times of Guinness World Records. Daniel, can dislocate his arms in order to make himself fit through an unstrung racket of tennis.

Natasha Demkina, belongs to Russia and has ability to see into people bodies just like X-Ray machine. According to her mother this skill first time comes to know when Natasha’s age was ten years old. Natasha’s mother took her to the doctor, here Natasha told the doctor that he had some kind of scars under his clothing. How cool is that Mmmm…. ;)

“I was at home with my mother and suddenly I had a vision. I could see inside my mother’s body and I started telling her about the organs I could see. Now, I have to switch from my regular vision to what I call medical vision. For a fraction of a second, I see a colorful picture inside the person and then I start to analyze it.” 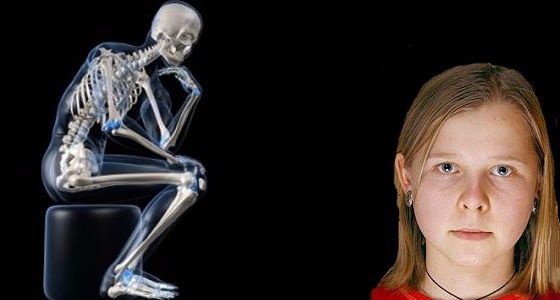 Tim Cridlands is the man who was born with the ability that feels no pain. Tim Cridlands has entertained the people across the world through puts himself in painful situation like pushing needles and skewers in various body parts and eating fire. During his performance Tim not only feels any pain but also without bleeding his body rapidly heals.

The Blind Boy who can See:

Ben Underwood was just two years old he diagnosed with retinal cancer and doctor removed his eyes at age of three which led to his blindness. Ben Underwood instead of living the traditional lifestyle of the blind he himself taught to detect the location of objects by clicking noises with his tongue. Ben used his ability to accomplish such feats playing basketball and football, running, skateboarding, riding bicycle. In 2009, Ben Underwood died at the age of sixteen due to the same cancer through which had become blind at very little age. 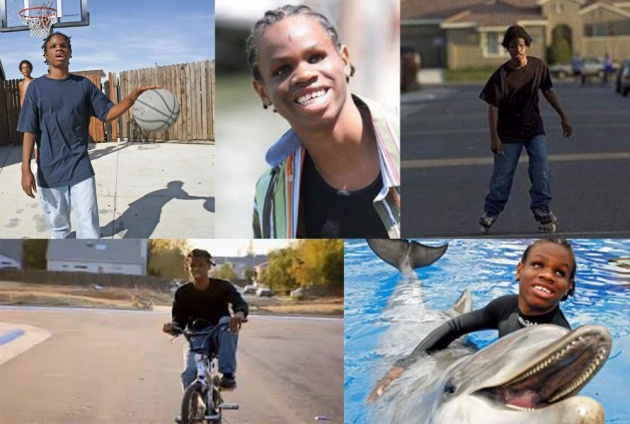 Michel Lotito born in 1950 and belongs to France. Michel Lotito is known as Mister Eats All because he could eat everything means not simple food but glass, metal and rubber. He has eaten numerous sorts of crazy things like fifteen television sets, eighteen bicycles, two beds, a cessna aircraft and one coffin. In 2007, Michel Lotite died. 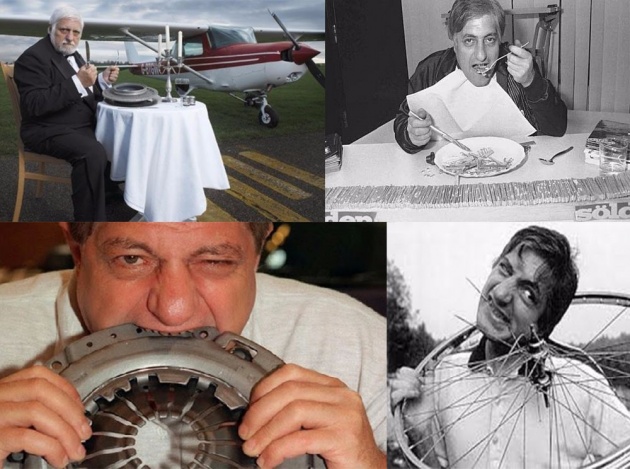 Dave Mullinse, is a man who has ability to hold his breath into the water for a long time and swim along time. Dave Mullinse belongs to New Zealand and has made Guinness World Records for holding his breath underwater more than four minutes. Dave can also swim  more than 226 meters which makes him real life Aqua Man.

Kevin Richardson also called the Lion Whisper. Kevin Richardson is a well known South African animal behaviorist. He got most popularity across the world for being friendly with wild animals like cheetahs, lions and hyena. According to Kevin after completing the task of friendship with them (wild animal), they treat him as their own. You guys can also enjoy Kevin Richardson different videos which he filmed his playing, walking and sleeping with these wild animals.

Claudio Pinto, also known as Eye Popping Man. Claudio Pinto has special and interesting talent in a way he can pop his eyes out of their sockets about ninety five percent OMG.... :o

Rathakrishnan Velu belongs to Malaysia and also called him King Tooth. He can pull weights of more than two hundred tones using teeth. He has also made world record for pulling the heaviest weight with his teeth. Rathakrishnan Velu told that he obtained his this amazing talent at the age of fourteen, when his trainer (belongs to India) taught him that he channel all his power to a single part of his body.

Daniel Tammet, has mind blowing ability to calculate mathematical problems at amazing speed. According to Daniel Tammet he himself invented seven languages which he also can speaks easily and fluently.

“In his mind every whole number up to 10,000 has its own unique texture, color, shape and feel.  This has helped him to remember things visually much easier then the average person.

In his experience the visual image of 289 as very ugly, 333 is particularly attractive, and pi is beautiful.  Perhaps this is how the frequency of numbers and numerology work with the logical world.”

Liew Thow Lin is from Malaysia, has ability to stick metal objects like iron, forks, spoons and bricks on his body same like a magnet. Scientists are also amazed and cannot detect how his magnetic body can balance and hold different objects on his skin. 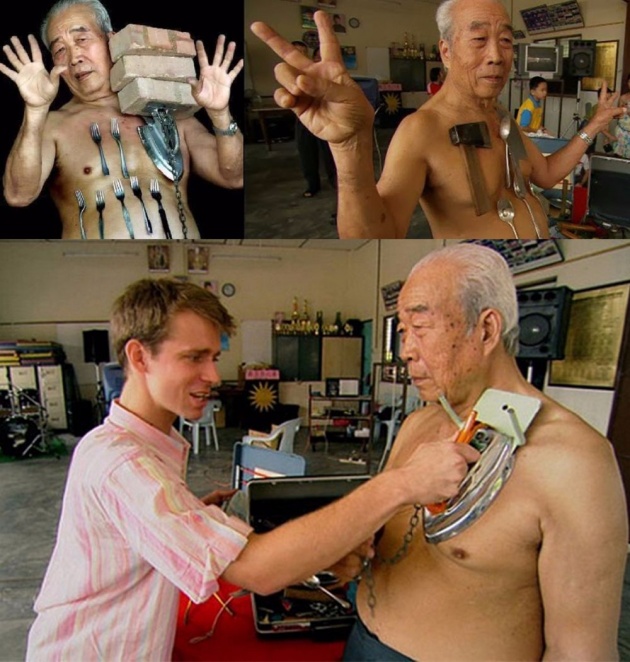 Isao Machii, belongs to Japan has the fastest reflexes around the world. He has incredible skill of sword. Isao Machii has made many world records for his quickest the skill of sword. He got world wide popularity through a video in which he sliced a speeding pellet in half using his sword skill.

As I told you about seventeen humans who have real life human superpower, but there are numerous other people who also have such incredible superpowers. I hope you guys will have enjoyed reading this blog post and thanks for your nice attention TeeHee….. ツ

Thanks for sparing time in reading My 40th attempt for my virtual home "BitLanders".... Stay Connected for more articles.....  ツ